Gender-Based Violence Is Pervasive Yet Invisible in South Asia

In Bangladesh and Nepal, gender-based violence is the major cause of intentional homicides, while caste-based gender violence in India is rampant.

The year 2021 saw a steep rise in the number of violence against women reported cases that have opened doors to a discussion on the already prevalent arenas of gender-based violence.

There are different forms of gender-based violence, which include Sexual Violence, Physical Violence, Emotional and Psychological Violence, Harmful Traditional Practices and Socio-Economic Violence.

Not another form of conflict

Understanding Violence against women as just another form of conflict needs to be corrected pertaining to the underlying causes that contribute to such situations.

The socio-economic structure, power relations within households, and institutionalized patriarchy are a few of the many societal factors that undermine a human’s identity based on gender.

In Bangladesh and Nepal, gender-based violence is the first or second cause of intentional homicides. A report by Oxfam states that 80% of women in Pakistan experience violence within their homes.

Female feticide and honour killings in India, missing girls in Nepal and Srilanka who are trafficked and forced into prostitution.

Acid attacks in Bangladesh and Pakistan are examples of gross human rights violations.

Apart from this, there are other types of gendered violence happening in everyday life within the private sphere which is invisible. Intimate partner violence and domestic violence are the most pervasive examples. Wife beating is intricately related to consequences of pregnancy loss and fetal mortality. 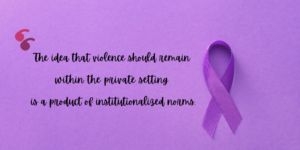 The idea that violence should remain within the private setting is a product of institutionalized norms. Ideological relationships within a social structure that makes GBV invisibiliz-ed especially in cases of domestic violence and intimate partner violence.

Mostly, violence which has not been reported but is visible to close circles (neighbours, friends and colleagues) is normalized as way of life voicing obvious acceptance according to societal norms.

Few forms of violence like dating violence, cyberbullying, coercive control, workplace trauma, and stalking have become so ingrained and embedded in everyday life that it often goes unrecognized.

When abuser is a family member

In some cases where the perpetrator is a family member, psychological burdens like hope or belief that the violence will end refrains the victim from reporting it.

Fear of shame and embarrassment is one of the most researched reasons for invisibiliz-ing gender-based violence. The public-private divide leads to a reversibility of structural violence, where public and political violence against women is seen, but violence which is committed in the private sphere goes unnoticed. 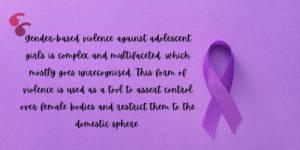 Gender-based violence against girls is an instrument to restrict

Gender-based violence against adolescent girls is complex and multifaceted, which mostly goes unrecognized. This form of violence is used as a tool to assert control over female bodies and restrict them to the domestic sphere.

The complexity of understanding this problem arises from the fact that individual attitude is less important than the broader social context and norms which define gender roles.

Young girls give up on education

Girls who witness generational violence against women in families face mental trauma and are socially vulnerable. The ones who are themselves subjected to such violence by family members tend to exhibit low self-esteem and weak academic performance.

GBV has serious impacts when girls avoid going to school or drop out altogether.

Sexual violence is a particularly destructive form of GBV on young girls, manifested as verbal and psychological harassment, sexual assault, rape, coercion, and discrimination in and around schools. It adversely impacts the process of educational attainment of female children.

Data from the 2017 Bangladesh Bureau of Educational Information and Statistics show that dropout rates for girls are at a high 42 percent at the secondary school level!

UNICEF’s Nepal Country Study (2016) reveals that girls are much more likely than boys to never enter school, and 5.7 percent of girls compared to 4.3 percent of boys are especially likely to be out of school at lower secondary school age.

The annual average dropout rate of girls in India was 17.3% at the secondary education level and 4.74% at the elementary level in 2018-19, said the Women and Child Development ministry. Caste-based gender violence in India is rampant and pervasive.

Girl students are vulnerable to multiple crimes; gender-based violence is one of the leading factors that put female students in a disadvantaged position and hinders their education. Identifying poverty as the main reason for school dropout makes gender-based violence perpetrated by family or school or society go unnoticed as a vital underlying cause.

This arena requires more emphasis and scrutiny to help minimize the female dropout rate from Schools.

The severity, type, and underlying causes of gender-based violence vary across different countries in South Asia, adhering to socio-cultural norms and traditions that broadly shape the position of a woman in the society.

Now is the time to discard stigma

It is ineffectual to attempt to conceptualize gender at only one level. We need to identify the ways structural gender inequalities, gender performances and gender identities interact to facilitate or challenge coercive control.

Violence in all its forms can have a concerning impact on a woman even long after the violence may have ended. To address the issue, the first step is to reduce the stigma around this issue, which will eventually reduce its invisibility and dismantle the foundations of gender inequality. 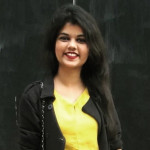 A Postgraduate in Sociology from Jawaharlal Nehru University, New Delhi. I write on social issues with special focus on children and women. I believe in voicing opinions through the art of writing. read more...