Women empowerment: Why “Education For Girls” Is A Misleading Statement

Education for girls is often a replacement of schooling for girls: this is a basic need and there is no reason in the world for denying it.

Some background: India and Italy are not so far apart

It may not be news to you, that Indians and Italians have a lot in common. From culture, to family traditions, in my 7 years in India I have never ceased to notice how similar these countries are. As somebody who has had the opportunity to experience both the worlds, I have come to the conclusion that while we are similar on many positive things – the warmth of people, for example – we are, unfortunately, also at similar stages with respect to women independence.

Whenever I say I am from Italy, I receive a number of reactions, from wonder to holiday daydreams to comments of how women in Europe are so free and can do what they want.

Let me give you a perspective. Throughout my childhood, commercials on TV were portraying the “perfect Italian family” with smiling stay at home mothers whose main worry was cooking tasty meals or removing stains from shirts. On the other side, there was reality, where women were in a job, with no house help and with little support from their husbands. Yet they were demanded to comply with those society’s expectations.

I still remember how, during our teenage time, my cousin sister and I would be told to clean the kitchen after meals. Nothing to object, if only our cousin brother would be asked to do the same too. “He is a male” was the usual response.

I run a little survey the other day. I asked my Italian women friends to share some sexist comments they have been told by family or close friends. Many opened up and shared their experiences: “I used to be told that I could not and should not have experiences with boys, because it would be wrong and I would have a bad reputation, but my male cousin was allowed to have girlfriends and it was perfectly normal”; another one said: “During school times I would be the trouble-making girl along with my male friends. When the teacher would come to scold us, she used to tell me: I understand they are boys, but you should be a well-behaved girl”. Talking about more recent times, a well grown-up musician friend shared her mother does not allow her to perform in other cities because “the female daughter shall sleep at home”.

Besides the concept of women as home and family caretakers, you may be surprised to know that in Italy too, unfortunately, existed the custom of giving dowry on the occasion of marriages; rather, it was an actual deal, solemnized in front of a notary. Despite it being declared illegal, there are still cultural legacies of it. While there is no exchange of money or properties anymore, in some parts of Italy, it is considered duty of the bride to bring what is called “corredo”, consisting of some sorts of fine crockery or multiple sets of handmade bedsheets and towels, made of precious cloths. Girls are either taught to stitch them by themselves in view of their marriage or, in today’s world, families spend high amounts of money buying them from dedicated boutiques.

Until 1975, Italian husbands were, as per the law, the only ones responsible for the education of their children. They also had the power to rule over their wives, giving orders and punishing them, if they deemed appropriate. Things changed thereafter, when a radical reform of family law took place. Since then, Italian women have been pushing for their independence, while battling against a part of the population who was (and still is) attached to hard to die habits.

As per a 2016 study done by the Italian National Institute of Statistics, 81% of women in Italy manage cooking and home chores while (you guessed it) only 20% of men do so. Many women are offered unstable or less paying jobs as compared to their husbands and exit the workforce to take care of family and children. As unfortunately is the case, femicide by a partner or ex-partner or a relative is a sad reality too.

Where does India fit in this? The role of education

All my life I have heard that women need to study to be free. And in India is no different. “Education for girls” is a slogan we all have heard and support. In some villages, and in many parts of the world, girls are denied basic needs and forcefully kept at home. This is terrible and has to stop, education is imperative! Yet, it is not the only way to empower women.

Let’s talk maths (let us put those equations to use for once). Let’s assume that education of women = freedom for women. Statistics tell us that in Italy, there are more women achieving higher studies than men. If the first statement was true, then women most educated in Italy = women most free in Italy, which subsequently = India to give as much education to girls as possible to achieve equality and freedom.

Is this a true statement?

If education and degrees were the only determining factors, we would all live in a better place and my post would not exist.

It is easy to say that we are for equality but what we hardly admit is that education for girls does not (only) mean them getting a degree – or, say, working after marriage – what we really need is a change in our minds, we need to get rid of the prejudices that we hold subconsciously. Of course, we first need to understand that we do have prejudices we are not even aware of having.

Even the most successful women CEOs and professionals can be (and often are) victims of a patriarchal upbringing, involuntarily passing on those values to their own children. We need to change the way we, both women and men, look and, too often, judge, treat, or just remark what other women do, because they have dressed differently, because they have chosen an unconventional path, because they don’t want to conform to societal standards, because they make different choices.

Education for girls means educating our minds to freedom. It is easy to throw the burden of women empowerment to external factors without looking within ourselves. Education for girls is often a replacement of schooling for girls: this is a basic need and there is no reason in the world for denying it. But education is not only degrees. Let us start from home. 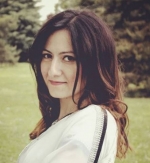 Chiara is an Italian and OCI (overseas citizen of India) passionate about creating deeper connections between Europe and India. She is recipient of the Europe India Young Leaders Award given by EICBI at the European read more...