A Mumbai mother was appalled to find that her daughter’s school medical form only asked for the father’s details, ignoring her very existence. Why do some schools discriminate against mothers?

A Mumbai mother was appalled to find that her daughter’s school medical form only asked for the father’s details, ignoring her very existence. Why do some schools discriminate against mothers?

Fresh off a move back to Mumbai, freelance writer Saraswati Datar was filling in the medical forms provided by her four-year old daughter’s school, when she came across something alarming. While the forms asked for details of the father’s name, occupation and phone number, it simply ignored the existence of the child’s mother.

Saraswati scanned each and every page of the form in disbelief, only to note with dismay that the school required no information at all about the mother.

Father given complete rights to a child’s public & legal identity

“The problem to me was not just a personal ego thing that my name was not needed. But giving the father complete rights to a child’s public and legal identity is both unfair and dangerous. It’s the reason women stay in bad marriages to save face, or the reason why single moms face discrimination,” Saraswati said. 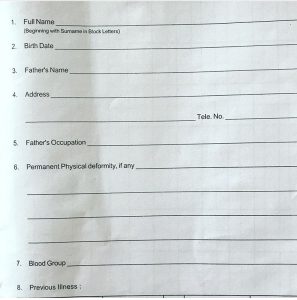 Saraswati took to social media to express her outrage that this was still a reality, despite the school being located in what is arguably one of India’s most progressive cities. The discussion that her revelation prompted proved that schools that discriminated against mothers were still very much a reality even in 2019.

Mothers primary caregivers, yet not on child’s school records

Another mother from Mumbai and editor of a parenting site, Rati Ramadas says she too faced the same issue, and that too, two years in a row.

“I can honestly say when I opened the booklets to fill them this year, I expected a change. When I didn’t see it, my heart honestly broke into a million pieces. I just felt sad. I had stayed up the previous night nursing my sick child and to not even be mentioned in his health booklet just rattled my (sleep-deprived!) brain. There wasn’t a single question relating to the mother of the child.”

“Leaving out the primary caregiver was very strange since this is a health booklet and knowing both parents’ blood group is basic if not essential,” Rati said.

Pune mother Disha Singh says she felt invisible at times while hunting for a preschool in the city.

“In one of the schools, I was quite taken aback by the fact that they did not even ask for the mother’s name and details on the form. It only asked for the father’s name, qualification, etc. Further, as we were discussing various aspects of the school with the principal, she kept referring to and having eye contact with my husband only. It seemed like I didn’t exist, and even if a question was asked by me, no attention was given to it and my husband had to bring her attention to it.”

Unofficial surveys show that 7 out of 10 mothers in most urban Indian centers are the default primary caregivers of the children in the household. They are also the ones expected to handle everything school-related from emergencies to parent-teacher meetings, everyday homework, packed lunches and more. So why is it that certain schools continue to accord mothers a lesser status than fathers?

Over the years, many a private school in Delhi has flouted the High Court’s guidelines by asking parents for details on their income and education before including them in the admission process.

Schools also use their screening process for parents to unfairly reject admission applications and in a lot of cases, the mother is subject to much harsher standards than the father.

Hyderabad mother of twins and online media professional Namrata Sadhvani talks about her experience with a ‘big’ private school that had an excellent academic record.

“I filled in the form for my twin boys, bought the (very expensive) prospectus and waited for a callback, which never came. I went to the school then to find out what the status was, and was told by the office staff that my ‘file’ said I had been rejected because I was very active on social media (they had checked) and would not be able to give enough time to my kids, as their mother. This would make them falter in their studies, so my application was rejected.”

Namrata tried to meet with the principal many times only to be rebuffed. Namrata says, “The Vice Principal finally met me, and told me in a completely unapologetic manner that ‘this type of behavior’ was not expected from the mothers of children who go to their school. When I questioned that if the fathers were put through the same screening, she did not have an answer.”

A discrimination that affects all

Are fathers truly immune to discrimination at the hands of school authorities?

“Forms like this pressurise men into remaining in the conventional roles of provider and protector which thanks to years of activism they don’t really need to do anymore. What if a father is a stay at home dad, or unemployed, or unable to work due to an illness or disability? Doesn’t such a form shame him for not fulfilling the role he is expected to fulfil?” Saraswati asks.

Such forms and processes also put single parents and same-sex parents on the spot. When contacted, a single mother who chose to remain anonymous said that she found the school-admission process nerve-wracking and that she had to struggle to find a school accepting enough of her reality.

The truth is that in India, convention still rules the roost. We expect fathers to be the breadwinners and the head of the family, while mothers take care of home and hearth. We blithely turn a blind eye to any other kind of family that does not fall under this traditional category.

But it is 2019, and it is time we started demolishing that worn-out trope of the self-sacrificing martyr of a mother who packs the lunches, does the laundry, helps with the homework, yet has zero legal rights on the child that she by default, ends up taking care of more than her co-parent. It is high time we called out school forms like these and behaviour like this, that renders mothers invisible until it is time for the school’s potluck lunch day, at which point the mother will be expected to have chef-like skills to turn out the perfect dish.

The best solution to this is to be more inclusive and try and shine a light on these micro-aggressions that continue to enable gender bias.

Saraswati says, “Whether a mother works in an office or doesn’t, is the primary caregiver or isn’t, is the only parent or a part of a couple, as a woman she needs to be respected and included. We need to realise that though children may be forced to carry their father’s last name, they are being cared for by people apart from him. Why not just say parents’ names? Or the name of parents and an emergency contact number separately in case the child is looked after by a relative or grandparents because the parents are working or incapacitated.”

Sometimes something as simple as adding space for the co-parent on a school form can mean a big step ahead on the journey to equality.