Hell, A Woman’s War Is Never Over! Here Is Why

A woman’s war is something anyone with a vagina fights for a place of dignity, from babyhood to the last breath. It is supposed to be ‘normal’ for a woman, you see!

We all fight! Everyday!

We fight with that impatient screaming alarm clock for those few ‘seconds’ of sleep. In case of not having the luxury of a private bathroom, we fight to grab the white throne. We fight against that shirt button which demands freedom from its strings at the last moment, those creases which are determined to show their individuality and shoe laces which refuse to agree on a single point like two opposition parties in the parliament.

Fighting to grab that strategic standing spot in the morning hours on a local, through the highway traffic, that prolonged promotion or impressing that cute colleague in the office. And the end of the day tired from all the moves, struggles, manipulations, achievements, and wounds we lay down our arms to sleep. This war is pervasive, omnipresent and has no country, cultural or gender barrier.

But there is one war which is fought everyday, each hour and each minute. A woman’s war!

A war to protect her dignity, a war to prove herself a good mother, a desirable goddess, a great cook, strong professional, a culturally sensitive idol, a tolerant body and a feminine soul.

This war is pervasive –  irrespective of her status, education, intellect or whether her Karma is a bitch or not. You see, one is subjected to this war not by choice but by the privilege of having a vagina.

If she is a homemaker – she is not even considered to be fighting a war. She is ‘retired-hurt’ in terms of men who believe that housework is not ‘that’ Work. So, if being a housewife she wakes up early, packs tiffin, takes care of the elderly, feeds the pet, does the laundry, rushes to do the bank work, gets the homework done – according to earning members of society, she has been doing the least she should be doing! Even when she tries to justify her existence to herself she is given suggestions on how she can utilize her ‘free time’ rather than wasting it ‘watching television’ –

If she is ‘working‘, she fights double or even triple than what a normal working person fights every day. If you thought that waking up the earliest and ensuring food for her family to go through the day was the only extra work she must take on – you are mistaken.

She juggles between the role of a wife, mother, daughter and professional amidst menstrual cramps, hormonal imbalances, bleeding body, emotional over work, sexual advances, unforgiving fashion police, desperate boss, male egoism at work, judgemental weighing scales along with the pressure to start a family or manage one.

She fights every scanning glare which reads her body proportion in smart clothes, she battles every step with an armour in her spirits and grit in her soul for she may be touched, groped, or catcalled by anyone at any point of times.

You see – there is a difference between the Road and the Ramp. While she dresses to impress as she walks like a queen in her favourite designer dress on the ramp, she dons a sword with a soldier’s armour in public spaces with a conscious choice of clothes depending on the area she is venturing into. And when we say public spaces, it worthy to mention those jails, orphanages, mental asylums and ‘public welfare’ factories, where irrespective of her being a prisoner or a constable, pregnant or a 10-year-old, her being molested, raped or aborted is normal and is “this is how the world works!”

So you see, on the surface it’s all pink and beautiful – while red, gory, shame and agony dance deep within. She fights to balance between the two parallel lines of this hypocritical world.

What she has been taught vs what she thought.

Where she wants to be vs where it is safe to be.

What she wants to do vs what she can’t.

What she can achieve vs what limits she is reminded of repeatedly.

Fights she must take on everyday which are neither acknowledged nor understood much.

No! Am not another woman ‘whining’ about our problems with plans to sit on a dharna demanding bodyguards, compensation, sympathy, or another women cell. It’s a shootout to those who bravely face it every day and yet go unacknowledged as it’s generally never considered a problem at all!

Believe me – you are not the only one. You are strong and wonderful! 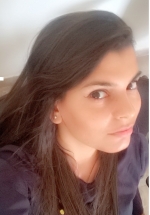 Writer,Quiller,Empath ,Researcher who loves reading classics with instrumental in the background. When not

Child Sexual Abuse Is The Elephant In The Room We Can’t Hide Anymore!