The screenshots that have been shared, in addition to showing comments that objectify and sexualize the boys, also show some seriously homophobic and racist comments as well. The original poster has claimed that the group regularly shares “dick pics, shirtless pictures of guys they know, guys from Instagram including me. Rating them, talking about the size of their arms, dick print, how they’ll look while choking their necks, etc etc.”

Let’s be clear about one thing: What the girls have done in this girls locker room is absolutely wrong. There is no excuse for it.

Nothing justifies treating another human being as a sex object, or homophobia or shaming someone for their skin colour etc. Nothing excuses ignoring consent. Such despicable acts have real consequences for those who are at the receiving end.

This post is NOT about defending the girls involved.

Why did the girls locker room come up only now?

Which is why the claims of “fake feminism” do not make sense.

For all sharing #girlslockerroom chats: Yes, it is equally terrible if girls have such groups. And no, they do not justify or make the #boyslockerroom chats less horrifying.

The point is not to play “who is the worse offender?” but to get to the root of the problem –the rape culture that sustains and fuels such toxicity, and which harms everyone, but especially women, transpeople and those belonging to other marginalized communities.

However, without fail, those who want to discredit feminism, bring up such examples of men being sexually harassed, exactly when we are taking about sexual harassment of women. One would think that if they really were concerned about the rights of men, they would do this work at other times as well, without feeling the need to piggyback onto these conversations or attacking feminism. 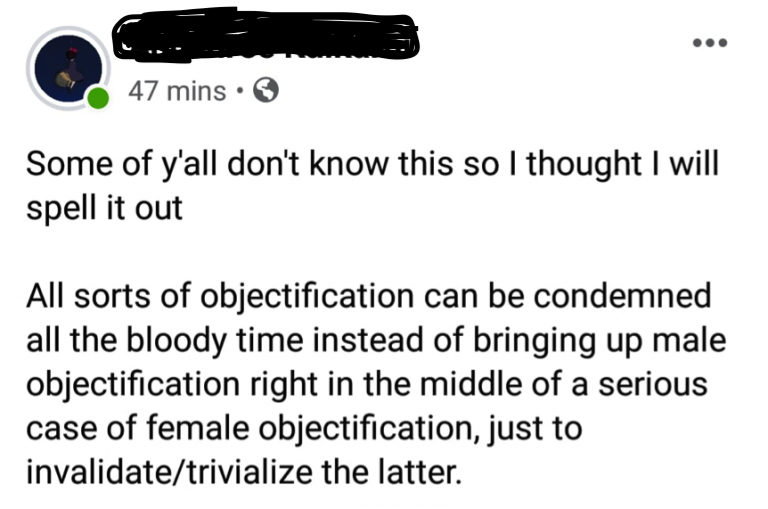 Since it is out there, though, let me list the differences.

On the other hand, the boys from the boys locker room have been receiving support, even from some female peers. Somehow, the behaviour, which so clearly stands out as “wrong” for girls, is normalized for the boys. This is rape culture.

No one is asking the boys who were objectified, “why did you share pictures like that?” “Why were you dressed like that?” “why aren’t your privacy settings stricter?” No one is telling them that they “asked for it” by posting their pictures online.

And that is a good thing, because victim blaming is wrong. Unfortunately, victim blaming is exactly what the girls are being subjected to, with every person questioning their decision to post their pictures online, as the young man does in this video. This is rape culture.

A lifetime of being shamed

Because the “honour” of men does not lie in their private parts, the boys who were objectified will not be considered “dishonoured.”

I am not denying that they may be feeling hurt, or ashamed at their pictures being used thus. These feelings are a normal reaction to a violation of consent, and they should not have to feel so.

However, society in general, won’t treat them like “spoilt goods.”

(There are other ways in which the attitudes of society towards men who have been harassed are negative, however. For example, they may not be believed. The idea is not to discount the suffering of such men, or to say that it is “easy” for them in any way but to point out that everyone who is harassed, suffers differently.)

Unfortunately, in our society, girls are supposed to guard their “honour” which is equated to their sexuality and their vaginas. Now, the girls who were objectified, will not only feel the same sort of shame, but will additionally have to bear the burden of “losing face.” Because of the aforementioned victim blaming, questions will be raised about their character, and they will be considered “loose” or “immoral.” This is rape culture.

There is an imbalance in the way the taboo around sex works in India. While it is a taboo for all, it is “understood” that boys have hormones and “such things happen”. Which is why, the boys of the boys locker room are likely not going to receive much punishment at all. Because boys talking about sex is “normal.”

In the popular imagination however, women and girls don’t have desires. Sex is not something they do, but something that is done to them. Women who talk openly about their sexuality are scorned and called all sorts of names. Which is why, the girls of the girls locker room are going to have hellfire rain down on them, because “chee chee, unsanskari girls.”

Again, the way both the groups spoke about sex, and objectified the opposite sex was wrong. However, sex and attraction are not wrong in themselves, and there are appropriate ways to express the same. It is a lack of inclusive sex education, and repressive attitudes towards sex, that make the problem worse. This also, is rape culture.

The boys objectified by the girls are not going to be asked to quit social media. How they dress, where they go, who they meet etc won’t be policed. Parents are not rushing to “protect them” by drawing boundaries around them.

As opposed to this, girls who simply belong to the same school/college as some of the girls who were harassed are now being targeted by trolls, seeking to push them out of social media. Girls everywhere, not just the ones at the receiving end of the harassment, are being asked to shut down their Instagram profiles. Their clothes, their friends, their hobbies –everything is coming under scrutiny, under the guise of “safety.” This is rape culture.

(1/n) About the #boyslockeroom
We hope this does not lead parents to begin policing the online activities of their daughters. This is not on the girls who have every right to express themselves as they wish online and elsewhere. #WhyLoiter

This is why they are not the same

Which is why, the girls locker room, while horrible and disgusting, is not “the same.” The objectification is just one part of the harassment. No one is defending that –no one should be harassed, irrespective of gender, and it was wrong of the girls to do so.

One must however, consider how incidents like these fit within the larger systems, and realize that harassment is fuelled by rape culture, which affects women, transpeople, people from the queer community, and people from other socially marginalized groups differently than upper caste, cisgender, heterosexual men.

Rape culture affects everyone. It assumes that women are always to blame. It refuses to believe that men too, can face harassment, or that men who have been harassed are somehow “less masculine.” After all, toxic masculinity is a big driver of rape culture.

That then, should be our focus –to create a world in which people of all genders and sexualities feel safe. To move from an “us versus them” paradigm, to a “we’re all in this together” paradigm.