Control of women’s voices, lives, bodies is the norm, under the guise of ‘protection’ and ‘women’s safety’. Can we ever achieve Fearless Freedom? Activist Kavita Krishnan’s new book explores this.

“Reject such work that requires you to stay out till late.”
“Why do you have to go at all? It’s too far, just cancel it.”
“Of course, you are free, to do what you like or go where you want. But, within limits.”
“Do you really have to go? It’s dark, and it’s not safe.”

These are just some of the things I, and I am sure you too, have heard as a woman.

It was therefore an instant decision to pick up this book – Fearless Freedom by Kavita Krishnan, a women’s rights activist who speaks up for women’s safety – when it was offered to me for reviewing. After all, the first line of the blurb itself had me hooked.

‘Safety’ a synonym for ‘control’?

‘Safety’ for women in India is, more often than not, coded as curtailment of autonomy. To be ‘safe’, women are told they must allow themselves to be kept under constant surveillance.

As an only child, I am showered with love and affection from both my parents. Unfortunately, this pampering also includes their over-protectiveness. Restrictions disguised as concern often hinder the free child in me who wants to explore. That it leaves me fuming every time is an understatement. As if I was some doll who didn’t know better, couldn’t be relied upon to make her own choices or decisions, and hence, needed to be controlled.

What I hadn’t expected was that being controlled like this is a universal phenomenon. In fact, I first rejected that I was subjected to any violence, at all. After all, I was much loved and pampered. My home is where I am safe, loved, and cared for. And this sentiment of mine was reflected in these lines from the book itself.

‘Confinement to the home itself is a form of violence that is not even acknowledged.’

‘Aren’t most homes cherished by women as a place of privacy, safety, and comfort?’

But… but… but… surely, this wasn’t me we were talking about. This didn’t apply to me, did it? I wasn’t the one being violated and controlled? The next couple of pages and lines were quick to divest me of this misconception. Because these lines from the book were something that I could relate to.

‘The point is love, concern and caring do not automatically translate into respect for autonomy and personhood.’

‘The love is for the idea of the daughter.’

It was a rude reality check, for I had been subjected to such surveillance in the name of safety! And understanding how it was yet another form of violence forced me to take off my rose-coloured glasses.

So, is parental violence being masked as a preventive measure for violence women might face outside home?

The book bares the link between patriarchy and the need to protect one’s family honour. Check these quotes –

‘Parents and brothers learn to express ‘love’ for and ‘duty’ towards a daughter or a sister by surveilling her and controlling her movements.’

‘A woman is a person, not the property (however loved and cherished) of the family or the community. Why is this concept so hard to grasp?’

Treated as someone in need of protection, a woman’s dreams and aspirations are often snuffed out in the name of safety. Unfortunately, instead of being able to demand the answer from the so-called ‘protectors’, it is upon us to analyse the societal and religious structures.

Having read these stories and how the entire system is designed to control, ‘protect’, and manipulate, the burning question on my mind was ‘what can we do to dismantle this nexus of politics, patriarchy, and religion/caste?’

Fortunately, the book delves right into it. Krishan offers the steps we need to take and does so without ambiguity.

Are there viable solutions?

After reading all of this, I was of the opinion that all that is needed is a complete overhaul of our social and cultural framework. However, the book is quick to point out how the empty efforts of the government in form of its patriarchal policies as well as their flawed implementation reinforce the very same problems it attempts to fight, thus hindering real progress towards long-term change.

Logical arguments presented by Krishnan explain how quite a few such governmental initiatives are only an eye-wash, and have in fact, propagated more violence and humiliation for women instead of empowering them. These chapters from the book are a real eye-opener as they expose the dishonest intentions and self-serving practices of those pretending to bring about women empowerment while in actuality only filling their own coffers.

Krishnan does not shy away from also critiquing the government’s exploitative and distractive techniques to shift the focus away from real problems. A similar scathing commentary is provided to expose the relationship between religion and politics, especially under the current regime, and how it is used to create a fascist and patriarchal country that demeans, degrades, and dehumanizes women to keep the control and power in the hands of a few. Her coverage of the scope of violence against women is comprehensive as it includes several incidents, analysing each in detail to bring to light the invisible violence inflicted by the public, police, judiciary, and social/ religious/ media influencers.

What is even more valuable is that she offers solutions too – not as a separate chapter suggesting radical but impractical measures but, in fact, in the very analysis of each incident. One only has to read with the right feminist perspective to spot the solutions.

And, while it is impossible for parents and women to dismiss the fear of sexual violence completely, it important to note that safety need not be dependent upon restricting a woman’s freedom of movement.

As Krishnan, rightly says in the Conclusion: ‘You do have it in your power as a parent to free your daughter of the fear that speaking up about sexual harassment or violence will mean that you will curtail her education.’

We, women, have been restricted and confined for too long. High time that we worked for a more effective and long-lasting solution. Most feminists advocating real change are calling for a collaborative collective movement that makes all levels of government accountable and works to ‘transform the entire system’. More women who willing to break the shackles of patriarchy are required. 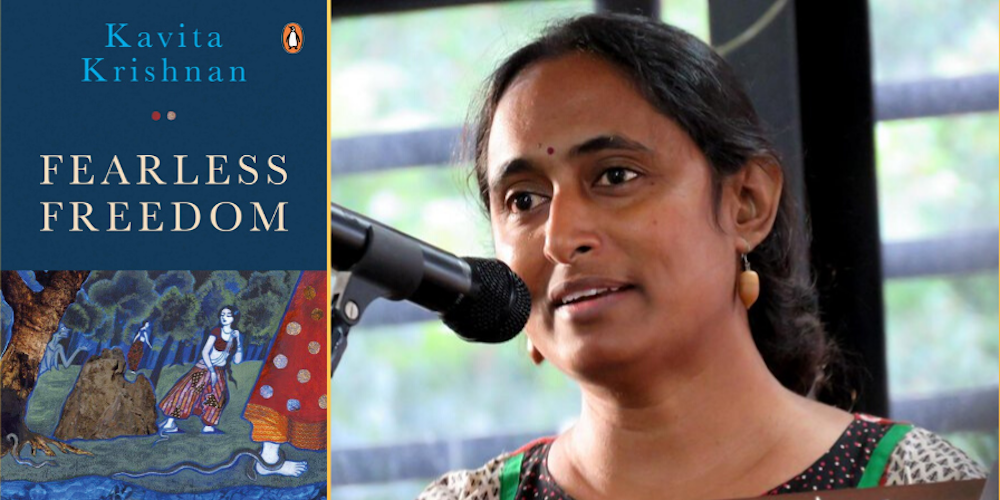 There are startling facts in this book that prove that a majority of women are similarly restricted, albeit in varying degrees. These restrictions may be in the form of rules regarding what time they come home, what clothes they wear, and even who they meet and interact with. The fact is, all of this is control, disrespect, and in conflict with the idea of ‘freedom’.

It’s commendable then that Fearless Freedom does not shy away from saying this. As Krishnan said in a speech at a demonstration post the brutal Delhi rape incident, “…regardless of whether she is indoors or outdoors, whether it is day or night, for whatever reason, whatever she is wearing, a woman has a right to freedom.”

Unfortunately, this basic human right is denied to women. Denied to us. Denied to me. It is this denial which is an indication of violence towards women, however subtle it may be. This revelation came to me within the first five pages of this book. It was not an easy realization.

In a recent article I wrote about women change-makers it was evident how gender equality needed a change at the social, cultural, and political level to be able to provide women the autonomy they need. Krishnan’s Fearless Freedom reinforces that need, while also giving context to the misogynistic attitudes (including an aversion to women’s education and women’s independence) and prejudices.

The last word belongs to Krishnan, of course, who, already anticipating the question of whether any real change is possible at all, provides the answer in the book itself.

‘If we can begin to admire, and cherish women’s bekhauf azaadi, their veera sutantiram, their fearless freedom – perhaps we can change the world.’

It is evident then that women’s empowerment movements need to keep working towards demanding an overhaul of our social and cultural, but also political and familial, beliefs.

The first step in this direction is reading books like Fearless Freedom.

If you would like to pick up a copy of Fearless Freedom by Kavita Krishnan, use our affiliate links at Amazon India, and at Amazon US.