An Indian Woman Has No Country, Nor Her Own Home, As Some Of Us Have Found Out

Often deprived of a life of their choice, Indian women are often also deprived of their identities, and a home they can say is their own.

Often deprived of a life of their choice, Indian women are often also deprived of their identities, and a home they can say is their own.

This statement made nearly a century ago resonates uncannily in today’s India especially with respect to NRC in the state of Assam.

Various women’s rights NGOs have produced reports which showed specifically the unique harassment faced by the women there, especially married women. Married women, when they went back to their natal family to procure the documents necessary to establish lineage, were denied access fearing it will establish their right as a member over their parental property and land.

Thus, a woman has neither country, nor a home. She is an eternal refugee, merely a vessel to keep going the patriarchal lineage. She is not a part of any lineage, she is not a citizen of any country.

A few weeks ago I personally came across a somewhat similar situation, and I finally understood that I have been a member of the largest worldwide club of refugees- the women.

I went to get my passport done a few days back. The message for police verification came the same day of giving the biometrics. I was asked to be present at the police station with all valid documents at 11 am the next day.

The next day I went, sharp at 11 am, with all the necessary documents. Everything was going quite smoothly and I was confident of getting a positive report, until the passport officer knocked me down to reality. He came across the column where I refused to give my father’s name and instead put my mother’s name as legal guardian, and all hell broke loose.

Now, to give a brief back story, I am a single parent child. My family consists of me and my mother. My mother has been an independent working woman all her life, who single handedly raised me since birth.

When I refused my father’s name

Understandably, I refuse to use the name of my father anywhere throughout; likewise I did so in passport application too. But my refusal came as a shock to the passport officer and he became sceptical of me.

I was bombarded with personal questions to understand

I tried to answer with utmost honesty all his questions, but he was restless. The official could simply not fathom the fact that I am refusing to use my father’s name in my passport. When I argued that as per government rules I am entitled to choose any one of my parents, it is my right to exercise this discretion, he was pretty confident of me as a troublesome figure.

Why do I, an adult woman, need a ‘male guardian’?

I produced all the valid documents of my mother, yet he told me he is unsure of the fact that the residential address given in my application form is actually ‘my’ house (because I refuse to produce evidence of my father residing in the same house). After continuous heckling and counter questioning, he said I need to show an evidence of any ‘male guardian’ residing in the same house, or that male guardian has to give a written declaration that the given address is my home.

I felt utterly humiliated, dejected, violated. Violated of my basic human right to be determined by my credentials, not by any ‘male guardian’. Moreover, the whole concept of a ‘male’ guardian is utterly toxic, discriminating and archaic.

However, after a whole deal of argument and counter argument, I had to give in to his absolutely unjust demand of producing evidence of a male guardian for him to be sure that the given address is my home. Ultimately my paternal uncle (yes, we live in the same house; it is high time to change our conception of a typical functional family structure) had to give his written declaration that I live in that house, and he has no objection of me applying for passport from that address.

No home of her own?

The next to next day I submitted his required document, and left his office having finally been able to establish my ‘home’. And I realised, a woman has no home of her own. In her childhood she stays in her father’s house, after marriage in her husband’s house, and in old age her son’s house, and in this process nothing ever constitutes her own house. In each house she has to have a male guardian to certify her stay in that house.

The data of 2011 census, Indian Human Development Survey of 2011-12 and National Family Health Survey of 2015-16 shows the dismal disparity in women landholding even after n number of so called landmark land reform movements in India. According to Women Land Rights Index 2018 (Centre for Land Governance), on an average 12.9% of Indian women hold land.

12.9% is a horrifyingly dismal figure, and this proves why I needed a male declaration to establish my home.

The violence of patriarchy is overwhelming and all consuming. It thrashes your self worth and questions your right to identity as an individual. We have to find ways to combat this demon in our head, where unknowingly we relegate women to being second class citizens. We need more gender sensitizing programmes, we need more open citizen forums for discussions outside the realms of parliamentarian politics. To combat an all pervasive patriarchy, we need an all pervasive awareness creation programme starting right from our homes.

And oh yes! My passport finally bears only my mother’s name. And the column for legal guardian is empty. 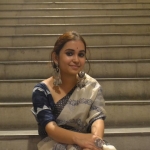 Currently pursuing MPhil in Women's Studies from Jadavpur University. Passed master's in Bengali from Presidency University, Kolkata in 2018. A socially aware citizen who loves to engage in dialogues about current socio-political read more... Zaira Wasim Trolled For Trailer Of 'The Sky Is Pink'; Trolls Don't Get Concept Of 'Her Choice'!