A new PregaNews ad, which focusses on the experiences of women with infertility, is being hailed as being 'revolutionary'. But is that the revolution that is truly needed?

A new Prega News ad, which focusses on the experiences of women with infertility, is being hailed as being ‘revolutionary’. But is that the revolution that is truly needed?

Scrolling through Facebook, I came across an advertisement for Prega News, shared by SG Dream Media, which they described as, “One of our most sensitive films around one of the most sensitive topics – infertility.”

If only the ad was truly sensitive. It isn’t!

A triggering ad that contradicts itself

Starring Mona Singh, who plays a woman who is unable to conceive, and her experiences in a home where her younger sister-in-law’s pregnancy is being celebrated, the movie attempts to give the message that a woman is complete in herself, whether or not she has children.

Unfortunately, the actual messaging on the film is so wide off the mark, that it actually reiterates some of the tired old stereotypes about infertility.

Let me tell you about my personal experience

As a woman, who has been struggling to conceive for a long time now, I found the ad quite triggering, and seeing all the praise being showered in it, was further distressing.

I have so many problems with this ad, I don’t know where to begin. I’m not outraging from a hypothetical perspective. I’m speaking from my lived experiences here. There may be others, who are also dealing with infertility, and who feel differently about this ad. I respect that, and say that their thoughts on this are as valid as mine.

Nor is this post a way of pointing fingers, or accusing others of being insensitive to me. I fully get that many people don’t know how to react to this aspect of my life. I just hope this will clarify my stance on this, and that it will help them and others reconsider how they treat the childfree women in their lives.

How do I really want to be treated?

There has been a time in my life, when I could not walk past the “baby section” of the store, without wanting to cry. Or could not look at baby pictures, without feeling a sense of grief and loss for something I never had. Over time though, I have overcome enough conditioning and built up enough of my inner resources to not react like that anymore. I don’t pine. I am genuinely happy for my friends/family who welcome babies into their homes. And most days, I don’t even notice that I am ‘different’.

What I still struggle with though, is managing the emotions of those around me, who feel that they somehow have to accommodate my feelings.

Whenever someone asks me if I have children and I respond in the negative, what always follows is a little awkward silence, followed by apologies and reassurances I neither need, nor want. Every person who knows about me, has tips or references they think I want to know about — what medicines to have, what doctor to see, what temple to pray at, what exercises to do, ad nauseam. When I attend functions or religious events, especially baby showers, or baby naming ceremonies etc, I can sense that people are walking on eggshells around me, trying to make sure that I feel welcomed.

And I get it — all these come from a place of love, not malice. They are trying to make me feel cared for, so I acquiesce (because now I’ve taken on the responsibility of managing their feelings), but all it does, in effect, is set me apart. It others me, and puts a huge, flashing banner over my head which marks me as different. It may help them feel that they have taken care of me…but it really doesn’t make me feel any better.

It stops being about what I want, or what makes me feel welcomed, and becomes all about how ‘good’ and ‘progressive’ they are for having ‘included’ me.

What would actually make me feel better is if I were treated just like any other woman. Don’t go out of the way to pretend that you don’t notice my childfree status, but also don’t draw attention to it. What I’m saying is — it’s a non issue; so don’t make it an issue. Whatever my feelings are, they are my problem to deal with. So don’t try to make me comfortable. Treat me exactly the way you would have if I did have children.

What the ad, and by extension, society can do better

Badi bahu (Mona Singh, in the ad, but any childfree woman in real life) doesn’t need to have a row of awards, or be in anyway extraordinary, to justify not having a child. She doesn’t have to be a superwoman or a super sanskaari bahu. She doesn’t have to prove her worth to the family or to society in any way.

Don’t put the badi bahu on the spot by asking her to name the child. Let her be as involved or as detached from that pregnancy in the family, as she needs to be. If she feels the need to escape to the kitchen to deal with her emotions, give her that space. She is a human being. She will have emotions. She will learn to deal with them.

You don’t need to name your child after her just to make her feel wanted — she will love her niece just as she would have loved her own daughter, even without that.

And for heaven’s sake, that girl child isn’t even born yet, and you’ve already turned her into a caretaker, service provider and guarantor of the family’s happiness and unity already – STOP!

Instead, if the message truly is that a woman is complete in herself, then let her be so. Do not define her by her relationships at all.

Normalize not having children

Let a woman find her core and her purpose. Normalize women not having children, for whatever reasons; choice or circumstance.

Honestly, a woman celebrating finding out that she is NOT pregnant; or a family throwing a party to celebrate the continued childfree status of their bahu, because they care about what she wants, and not what tradition or societal norms dictate — now that would be truly radical!

This Women’s Day, let us normalize women not having children – either by choice, or by circumstance! 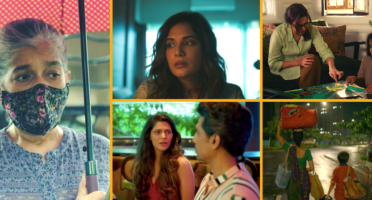