Unpaused, Amazon Prime's new offering, reminds us that isolation was actually the old normal, and connection is the new one.

Unpaused, Amazon Prime’s new offering, reminds us that isolation was actually the old normal, and connection is the new one.

The pandemic and the ensuing lockdown brought with them a lot of struggle, but they also pushed us to form closer connections with people around us, and forced us to acknowledge the humanity of many others. Hopefully, as we slowly emerge from this into the New Year, we will carry these lessons with us.

As I write this post, I am grieving. I learnt just a couple of days ago, that I have lost yet another person close to me, to a sudden heart attack.

This year has been brutal like that. From celebrities like Irrfan Khan, to close friends and relatives, to absolute strangers who are just numbers in the newspaper, we have lost too many – too suddenly and too soon. Our wounds are raw, and grief is yet another thing that we must process in addition to all the other assaults on our mental health.

Yet, this year has brought us together in solidarity. This is where Unpaused, a new anthology of 5 films, shows how this has happened, quite counterintuitively.

The five short films that are part of the anthology Unpaused, are a tribute to this sense of connection and awareness.

In Glitch, set 12 years in the future, where we are battling Covid-30, a hypochondriac and a scientist working on a vaccine find love (Gulshan Devaiah and Saiyami Kher, respectively). In The Apartment, the female owner of a newspaper, tries to die by suicide because she doesn’t know how to deal with the guilt of having a husband, and co-owner, who sexually harassed women journalists working for them. She finds help in the form of a man (Ishwak Singh) who somehow always rings the bell exactly when she has the noose around her neck. Rat-a-Tat is an ode to unusual friendships, and to forgiveness, as it brings together a cantankerous senior citizen (Lilette Dubey) and a much younger woman (Rinku Rajguru), who is a struggling production designer. 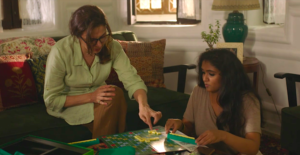 Vishaanu (which given the title and in other ways seems like a call back to the Oscar winning Korean movie, Parasite), starring Abhishek Banerjee and Geetika Vidya Ohlyan, highlights the plight of labourers across India, who found themselves stranded in big cities, without work, food or friends. This is the darkest story of the lot, because there are no happy endings here – just a reminder that we must never forget them again. My favourite film from the anthology, which moved me to tears, is Chand Mubarak, in which a senior citizen (Ratna Pathak Shah), and a Muslim rickshaw driver (Shardul Bhardwaj) who finds himself unable to be with his family for Eid, learnt to together deal with separation and loss. 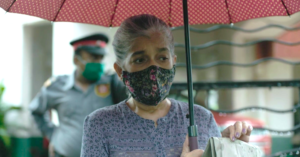 What is real isolation?

‘Social distancing’ has been one of the buzzwords of this year, as we were forced by Covid-19, to put physical distance between ourselves and others. Suddenly, the old forms of greeting or affection – handshakes and hugs, became dangerous.

And yet, I wonder – were we not even more isolated before this whole pandemic?

Wasn’t our normal a rat race, where we barely had any time or attention to give ourselves and our loved ones? Where we barely saw our neighbours – forget knowing them. Where we never even acknowledged the existence of some others, just because they belong to a different class or caste.

A year of extraordinary connections

As we sat at home, separated from the world, the world came home. Albeit through screens, we saw each other a lot more. Families gathered, around the world to play bingo, or ludo, or other games, with relatives usually only seen at weddings or other functions. Events held online, meant that suddenly, people who would not otherwise been able to attend these events, suddenly found themselves able to be present.

As the year wore us down, we relied more and more on each other for solace and support.

Most importantly, it made us acutely aware of the people we usually ignore. Poor labourers, senior citizens living alone. The doctors, nurses, scientists, sanitation workers etc. fighting form the frontlines. The people in our life we usually take for granted – our domestic workers, tailors, hairdressers etc.

So here’s what gives us hope

I admit – the films are too optimistic.

And even though this has been a year of connection, this has also been a year that has highlighted horrifying divisions. Sections of our society are in extreme economic despair, while others have profited off tragedies. Hathras and the recent laws restricting inter-religious marriages, bring to light that large sections of our population are still excluded and othered. And while we pay lip service to medical workers, farmers, and others whose labour we rely on, in terms of real acknowledgement, they have received very little.

One hopes though, that we will carry the few silver linings that we have found in this year, into 2021. That we will take the lessons we have learnt and find ways to be more inclusive, accepting and connected.

That we will remember that real ‘social distancing’ is not physical – but emotional, and that whatever happens we must never go back to the old ‘normal.’