Anand Mahindra’s Tweet About Working Women Is Awesome, But Is This Enough In Itself?

Anand Mahindra's tweet about working women having to put in extra effort is admirable as a conversation starter, but is that enough? And what about other women?

Anand Mahindra’s tweet about working women having to put in extra effort is admirable as a conversation starter, but is that enough? And what about other women? 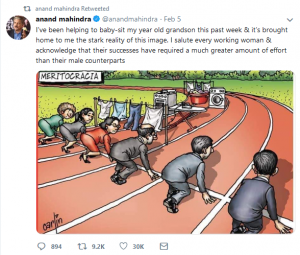 Since then, I have been seeing the image and accompanying quote, everywhere. The news was reporting on it, some writing groups and friends were sharing it, and rather infuriatingly, even some people who I have witnessed disparaging feminism and feminists were sharing it, with wholehearted agreement for the message.

Finally, unable to take the double standards anymore, I posted a status of my own on Facebook:

“Anand Mahindra tweets about how life for working women isn’t simple. Kudos to him.

But here’s the thing: We women have been pointing this out for decades. In response we get to hear about how we have a “natural ability” to multitask, how we are making excuses and how not all men treat their wives like maids. We have been accused of having “extra benefits” at work, and lack of commitment.

But a powerful man acknowledges that we do double duty, and suddenly it’s the gospel truth. People who I have seen disparaging feminists are suddenly sharing that tweet with a lot of praise for Mr Mahindra. #Facepalm”

It shouldn’t have surprised me at all, that people who do not believe feminists, are more than willing to believe Mr Mahindra. After all, feminists are seen as “angry women,” and as Soraya Chemaly, the author of Rage Becomes Her, points out, “men who display anger – professionally or politically – are rewarded with people’s confidence and trust, but women who do are penalized – seen as less credible, trustworthy or competent.” This is supported by a study by Salerno and Peter-Hegene, which found that, “Our results lend scientific support to a frequent claim voiced by women, sometimes dismissed as paranoia: that people would have listened to her impassioned argument, had she been a man.”

Anand Mahindra, is this too little, too late?

My post on Facebook however, did generate an active and stimulating discussion, which covered the issue from many different perspectives. Some women, like my friend, Priyam Sinha and fellow Women’s Web author Maitabi Banerjee, felt that I had expressed what they had been thinking themselves. As Maitabi pointed out, it was a bit like Indians seeking validation from the West.

Others questioned why he had come to this realization so late in life. To quote one of my friends, “My question to Anand Mahindra is, did he do the so-called ‘babysitting’ of his own children? Why didn’t he? Why did he leave it all to his wife? What kind of person was he that he didn’t have time for his own kids? (If he had spent time with his kids, he would know about all the hardwork involved, decades before).”

Pooja Priyamvada, a professional translator who also writes for Women’s Web, pointed out that, “he also didn’t do it for women in general or thousands of women employees in Mahindra but only when he had to one day baby sit a grandchild whose mother was out working.”

Another friend felt that men get credit for doing the bare minimum, and so Mr Mahindra was getting more credit than was due, “the perception in society is way too screwed up. One small mistake and women can be labeled as bad mother/ wife, this bar is way too high. For men on the other hand it’s easy to be labeled as good father/husband. I think it’s a lot of pressure on women be a perfectionist.”

Or, better late than never?

Some others felt that it was better late than never. After all, his tweet did start a conversation.

Kiranjeet Chaturvedi, the author-curator of Escape Velocity and the Founder of Write and Beyond Group, said, “if it helps change anything for the better, good. Even if it is just words, good. But the real deal will be if it won’t be shot down so quick and easy when women raise the point.”

Seema Taneja, who writes for Women’s Web, echoed the thought, “if this tweet helps authenticate the point women have been raising for decades, it’s good. As for the late realization, I would say better late than never. Generations of internalization doesn’t go away so soon, but if a conversation begins in families after his tweet it may have some impact. When I shared it yesterday my own cousin accepted that not only the physical but the mental load of house chores also should be the responsibility of the entire family not the woman only.”

Parvadavardini Sethuraman, who writes for Women’s Web too, also chose to focus on the positive, “there is a radical change in perception without people even agreeing to it. But may be a few did give it a thought, when they wouldn’t otherwise. So may be something positive will come out of it.”

Why only working moms? What about stay at home moms?

Another friend brought up the fact that while working women do have it hard, even stay at home moms face a lot of difficulties, “the chores are never ending and so is our exhaustion. Add some tireless kids to the equation and you will feel like going into a sleep from which you never want to wake up.”

This comment in turn led me to bring up the idea that at the end of the day, both working women and stay at home moms, have the same core problem. A working woman’s life and a homemaker’s life are equally challenging, but in different ways. Pitting them against each other is the patriarchy’s trick to ensuring that the actual issues never get solved. And the issues are the same in both cases — more involvement from the men at home would offer a respite to both homemakers and working women. But when we start discussing who has it worse, that slips under the radar.

I have no complaints against Mr Mahindra. But I do wonder what his next steps will be. Are there any actual policy changes that he intends implementing for his female employees now? Is he planning to give paternity leave to his male employees or instituting any policies to encourage them to be more involved at home? Or does he believe that the tweet is solution enough?

Register at Women's Web to get our weekly mailer and never miss out on our events, contests & best reads - you can also start sharing your own ideas and experiences with thousands of other women here!
working momworking women