It was a harmless conversation over a Sunday lunch among a group of four women. We were discussing how a school friend of ours went through harassment at work, and ended up leaving her job. One of the women said that she does not have a #Me too story because she is bold! She would slap any guy who would dare to misbehave with her.

“Yes. I think men are also smart that way. They know who to hit on. Radhika was like that in school also, you know. The flirty type…”

“More than that, I think she is bewakoof (stupid)! Yaar, he asked her to come to his house after work, Madam didn’t find anything wrong!”

“Actually this is one of the reasons I stopped working after Ahaan was born. Such a horrible work culture yaar! Ab, why be unnecessary ambitious!”

This is a typical conversation that happens among women. Women judge other women. But had it been a conversation among men, about the same situation, how would they have responded?

“These women! First they take advantage of rich, powerful men. When they don’t get what they want, they cry rape!

“These days better not to interact with any women!”

“What about false cases of dowry! All laws favour women in this country!”

There is a pattern. Women are divided. Always. Men are united. Always. Why is that?

The most easily understandable example I can think of is that of how Bollywood responded to the recent #MeToo movement.

We have seen that until now actresses have not been in support of other actresses. Speaking up for another women may mean speaking up against a powerful man. And not many would consider it worth it when it is somebody else’s truth that is on stake.

We have heard how powerful people anywhere in the world manage to completely wipe out the voices of people who try to speak against them. Is this why more actresses are not supporting someone like Tanushree Dutta? Because they want to be in the good books of the bigger people? Not to forget, women do not wish to get labelled as ‘difficult’ or ‘Touch me not’ in order to maintain their approachable, accommodating and easy-going (read employable ) status at work.

But is it the women who are at fault, or is it patriarchy?

It was sometime in 2004 that I was studying in a reputed school in New Delhi. While a school exam was going on, the invigilator found some chits being passed around in two to four rows of  boys. The invigilator started questioning them. He asked who had created those chits. The boys were all silent. Nobody took anybody’s name. The class-teacher was called. She said that unless somebody takes up responsibility all of them will be suspended.

One time in my old job, an intern accused her boss of inappropriate behaviour. The man allegedly used to place his arms on her shoulders while reviewing her work. When questioned, he said that HE wanted to complain against the girl for being “over friendly” with him as she always shared chocolates with him! But he did not because “She is a girl, and he was worried about her reputation and marriage prospects!!!”

I have always wondered why men find it so difficult to admit they are wrong. They can never apologize without an ‘If’ or ‘But’. Maybe the picture says it all… 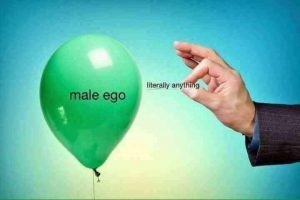 I am holier than thou attitude

I remember talking to a friend after watching Pink. She told me that she would have never gone to a resort / hotel alone with unknown men. This unfortunately is common. As women we are constantly judging other women’s choices.

I would never wear such a skimpy dress.

I would never sleep with someone on the first date.

I would have never drunk so much.

It is almost as if we feel that other women invite trouble whereas we are so holy that we do not provide any opportunities for bad things to happen to us!

It is high time that we understand that shame belongs to the perpetrator, not the victim.

The ‘I am not that kind of a woman’ attitude has no place in an evolved society. Bollywood movies also love to glamourize this phenomenon:

The hero always tells the girl “Tum sabse alag ho!” etc.  There is nothing cool about these statements. They are absolutely misogynist and it is time to boycott them!

Taking a parallel in our ghar ghar ki kahani, I remember a friend’s mother-in-law telling her how her mother-in-law back in her days was so mean and dominating. She would make her get up at 4:30 am, take a shower, prepare everyone’s food, clean up, not time spend with her husband, never go out, and commit all kinds of atrocities. In comparison, the MIL thought she is very generous, as she allows her DIL to work and socialize.

What is with the saas-bahu, nanad bhabhi, doosri aurat conflicts, where women continue to fight over insecurity regarding a man they love? Why! If your husband is having an affair, blame him! Not the other woman!

Ladies, we cannot keep putting each other down. I am not asking you to have solidarity with the entire aurat zaat! I also believe that misogyny and patriarchy are mindsets and not gender related. Please support ideologies. I am not asking you to support a woman just because she is a woman. By all means, every person is an individual. But the whole, “I am not that kind of a woman,” “What was she thinking” “I would have slapped” reasoning is highly insensitive. Please do no become the female counterpart of “Not all men!”

Let us learn a thing or two about unity from men here!