Why do we equate respect with submissiveness in Indian society? Surely, a daughter can be outspoken and respectful at the same time?

A few days back, a dear friend of mine burst into tears while having a conversation with me about her marital woes. She has been struggling to adjust with her emotionally abusive in-laws and when I suggested that she should get her husband to step in, she responded with despondency.

“He says I should ignore it all because he does not want to disrespect his parents by bringing this up with them.” Now, this could be an excuse given by him for avoiding any kind of altercation with his parents but it is quite likely that he genuinely believes that being submissive is being respectful. Because, isn’t that what many of us have been raised to believe?

Even today, in many households, a child who listens is considered to be a “good” child and the children who have a mind of their own and do not shy away from voicing their opinions are declared to be “problematic” or “stubborn”.  The parents are supposed to have the final word and if the child disagrees or debates, it is equated to being discourteous or ill-mannered behaviour.

But, do we realize that by doing this we are actually curbing a child’s ability to be forthright? Why is it a problem if our kids are the ones pointing out to something incorrect or inept in us? Is it our ego that makes it difficult for us to accept that our mistakes can be rectified by our children? We want our children to be frank, independent and individualistic to be ready to face the world, but exhibiting the very same characteristics at times leads to a clash at our own homes.

As a parent, I am fully aware of how difficult it is to handle debates or arguments with kids. Most of the times, we feel we are right and whatever we are saying or doing is for their betterment.

My daughter is 3.5 years old and I sometimes feel I have a teenager at home. More often than not, she discusses matters with me to the point of exasperation and according to many, she “questions too much”. There are times when I feel like screaming my lungs out – “Just do as I say and don’t answer back”. But, I refuse to give in to this temptation because I want to encourage independent thinking in her, and make her an individual who doesn’t hold back when it comes to sharing her thoughts and opinions. I do not want her inherent spunk and fearlessness to get suppressed because of me. I want her to correct me when she feels I am screwing it up or when I am being unfair.

Just yesterday, I was extremely rude to her and I was shouting at the top of my voice as I had reached a breaking point.  With tears rolling down her cheeks, she retorted – “Mumma, you cannot talk to me like that. You only say it is rude.” For a moment, I was irritated and wanted to tell her – “You don’t teach me that”. But, then I got a grip on myself and eventually apologized to her and also made her understand why I behaved the way I did. It was not about whether I was right or wrong but it was about assuring her that she was justified at her end to remind me about what I have taught her.

The deal here is not about our parenting methodology. We could be strict, we could be following gentle parenting or we could be assertive parents, or a mix of all these. Irrespective of what kind of parents we are, we need to keep aside our egos and be ready to learn from our kids not just when they are young, but even after they have grown up into adults. We may not necessarily agree with them always but we have to let them be open and honest with us.

I, in fact, think it is beautiful when kids show us new perspectives and make us think of certain things in a completely new light. As we say, every child is different and comes with a different set of ideals and philosophies. Children who question, discuss or dispute are not just good for us but are also so important for the betterment of this world.

Respect reflects in their attitude and in the way they put forth their views, and that is what we need to instill in them. Let’s not expect them to be acquiescent to show their respect for us.

There, I said it. Damn, did I just document this for life? 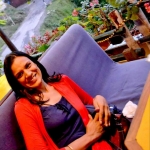 Aren’t We Hypocrites Celebrating Daughter’s Day And Expecting Girls To Be Grateful Just For Existing?