What is it with Indian men, and their sudden declarations of respect for parents, their values, and Indian culture? Do they mean it, or is it just convenient? 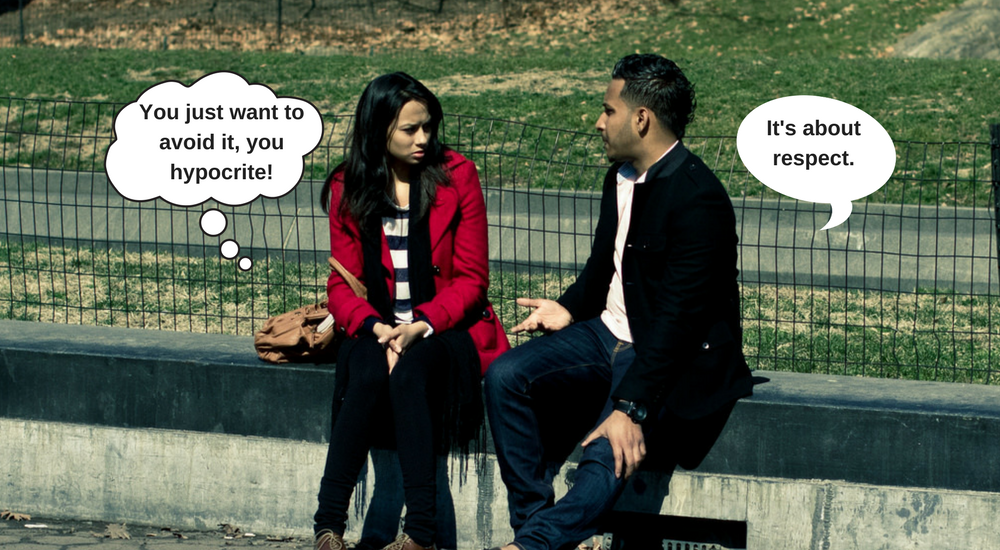 What is it with Indian men, and their sudden declarations of respect for parents, their values, and Indian culture? Do they mean it, or is it just convenient?

Hypocrite I – Dowry is a tribute to our culture

Jaya and Harish are engaged to be married. It is an arranged marriage. Harish’s parents want a lavish wedding, some cash, a car and a good stay for their relatives. The car is because – “Aap hi ki beti baithegi usmein!!”

Jaya is upset. Harish says he does not want to unnecessarily argue with his parents. He respects them. Moreover, how dare he speak up against the mighty Indian culture!

Aditya and Nandini have been married for five years. They are a young, fun-loving couple. They both drink socially. They keep a lot of alcohol at home. Every time any of Aditya’s friends travel overseas they are given an alcohol list to be purchased from duty free zone.

Aditya’s parents do not know that he drinks. Before their visit, the house undergoes a raid. Even the CBI would not be able to find a trace of alcohol. During one such visit of his parents, Nandini had gone out with her colleagues for a team dinner. She had a couple of drinks.

Aditya scolded his wife for not caring about his parents’ wishes. Nandini explained that she drank in her limits. “Moreover, it doesn’t matter,” she said, as the parents barely noticed anything different.

“But they could have. Yet you drank. One day you could not avoid?! Alcohol is so important for you?! You don’t even have respect for elders!”

This fight continued for a long time even after the parents left.

Anil and Neha have been dating each other for almost a year. In this one year, they have gone on numerous trips together, checked into hotels, and sneaked into each other’s houses when their parents have been away.

One weekend, Neha urged him to go with her to a nearby hill station. He told her that he couldn’t because an elder cousin of his lived there with her family. It would be risky.

Neha argued that every place they had gone to in the past has been a risk. The chances of his cousin bumping into him is quite low. She had planned the trip and was excited about it. She assured him that he need not be scared.

“It is not about being scared. It is about respect.”

Samir and Richa are a married couple. Both are working. Today, Richa has cooked chicken curry with rice.

“Aah! Today is Tuesday! I can’t eat non-veg – you know Mom wouldn’t like it! ” Samir said with much remorse, drooling at the gravy.

“Oh no! Why didn’t you remind me?! I have not made anything else! It is okay. Have it for today!”

“Hmm. But feeling bad. Why did you forget?”

“Relax! I have seen you have non-veg on so many Tuesdays! Anyway the chicken will not feel any less pain if you eat it on another day!” Richa joked.

“Hey! Don’t make fun of my culture! It is all about respect!”

Hypocrite V – An extramarital affair but no alimony!

Ranjit is a married man trying to get a divorce. He and his wife have been separated. He is now in a relationship with Diya for the past two years. His wife wants a hefty alimony. They are not able to reach any kind of consensus. Diya has been waiting for him. Every time she asks him about the status, he says:

“I do not want that ***** to humiliate me and my parents in court. No one has ever pointed a finger at them in their life. If she brings up our affair…  My parents will not suffer because of me. Their respect is most important to me!

It is all about respect for parents and Indian culture!

I get it. Some things are just not appropriate to be discussed with parents. I have friends from other countries. Smoking, drinking, pre-marital sex, may be frowned upon by parents in other cultures also.

I remember the episode of the very popular TV series, ‘Friends’ where Monica gets drunk on her 30th birthday. Her boyfriend Chandler tries his best to hide this from her parents. I have also seen a lot of movies where the parents don’t allow adult children to sleep in the same room before marriage.

My friends from other countries tell me that there are certainly rules, and do’s and don’ts in their families too, just like ours. They may choose to hide these things from their parents too. However, nobody calls it “respect for parents”!!

Respect is defined as ‘due regard for the feelings, wishes, or rights of others’. I have never heard respect defined as ‘doing what you like when convenient, but hiding it when inconvenient’. It is the defence behind which Indian men hide all their weaknesses.

Mr. Harish. You are greedy. You are spineless. Accept it. You respect money.

Mr. Anil. You did what you wanted to do with Neha, when you wanted it. Suddenly, if she wants the same from you, the proposition seems risky to you as a family member might see you and tell your parents. Something you happily forgot when you were having sex with her all this time. You have no business shaming her now just because SHE wants, and you don’t. This is not about respect.

Mr. Samir. You try to remember the days your mother forbade you to eat non-vegetarian food. But sometimes you miss. You conveniently forgive yourself and forget about it. But incidentally, when your wife forgets, she is driving you to commit a sin?!!

Mr. Ranjit. You want to have your cake and eat it too. You don’t want to pay alimony. Yet you don’t want to lose your girlfriend. How is respect for parents at the center of all of this?

“Respect” is a trump card for the men in our society. It is a valuable resource that may be used in order to gain an advantage, and justify an action in ANY situation, but only when they want it.

Why should we worry about any other reason to do or not to do something? When it can all be conveniently concealed under the blanket of “respect”? All vices can be conveniently camouflaged as respect for parents, or respect for our culture. It is a one-stop solution for all problems they do not intend to resolve!

Guess what! You are too weak, or too much of a hypocrite to stand up for what you believe in (if at all you believe in something).  If you are doing something you like, accept it. Be honest about it. Own it up. Don’t hide behind the garb of respect.

Because we can see you right through it.