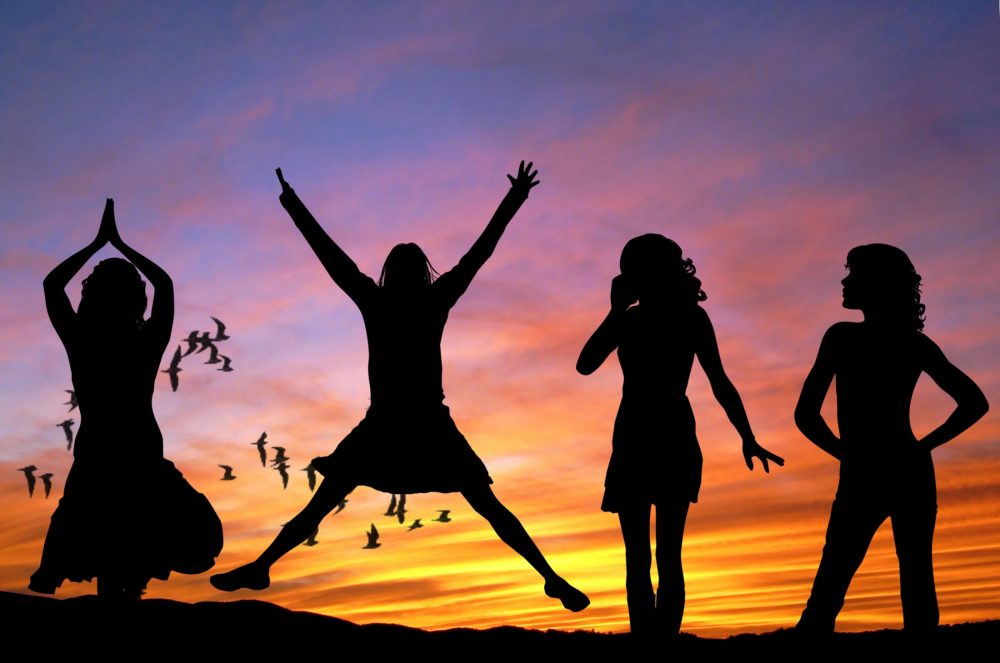 The tall and petite Natasha. Nats, she liked to be called – every boy was smitten by her and wanted to take her out on a date.

The studious, super brainy and ambitious Pallavi. We were certain she would be the next scientist in the coveted list of those that make path breaking discoveries.

The chirpy, super talkative Megha, who was the one person everyone went to when they needed any gossip. Name it and she had it. She belonged to a super rich business family of Panjus and we all envied the swanky luxury car that came to drop her to college and her Louis Vuitton handbag of course.

And me – the simple – not very talkative – not very ambitious plain Jane. I was and am still a very ordinary girl but in the company of my best pals, I would light up and become a different person.

After college, though, we all crossed our hearts and took a vow that come what may, we shall always be there for each other – little did we know life would clutch us in its grasp and our lives would take such different paths.

Nats applied for a course in one of the premier airlines. She decided she wanted to be an air hostess and see the world, and it was a great chance at meeting a couple of rich and handsome guys. She left for Mumbai and later landed a job as an air hostess in one of the international airlines.

Pallavi studied law and joined a prestigious law firm. She met Karan who worked as her senior; they fell in love and got married. They had a son Kannan.

Megha had married a stinkingly rich businessman chosen by her parents. I regularly saw pics of parties hosted by her and her vacationing at exotic locations.

And about me – I had completed my graduation and taken up the teachers training course, post which I started working at a school nearby as a teacher. My parents found a suitable alliance Sudhir who worked as a clerk in a cooperative bank. After 2 years, we were blessed with a baby girl, Aradhna.

It is not that we did not want to stay in touch but in those times, mobile phones and the Internet was still unheard of. We made phone calls but over time that too became occasional. Everyone got busy with their personal lives and careers.

Nats and Pallavi did not live in Pune, Nats was always on the move and Pallavi had moved to London, as she got a very good opportunity there. So it was just 2 of us and we did meet a few times but it felt likes something was missing without the whole gang being present.

But this time it was different. Our alumni had organized a meet, and it was a grand event as our college was celebrating its golden jubilee.

Pallavi was back in town, she had relocated to Pune. It was tragic – she had discovered that her husband was a philanderer who had been cheating upon her since so many years. A bitter divorce where she had to fight for the custody of her son ensued. She won the case but lost something in her that day. The ability to trust, the ability to smile, laugh, and share her feelings – had vanished.

Megha had her own tragedy – she couldn’t conceive. At first, they decided to wait for a few years and then she was pregnant after 3 years of marriage. She suffered a miscarriage and after that she never conceived again. Endless trips to fertility clinics, IVF rounds, going to every temple, observing every fast – she did it all but no luck. It was 16 years of marriage now and they were Childless.

She had suggested adopting a child but her husband and in laws staunchly refused – “Whose child is it? What are its origins? How can we just get someone’s child home like that and call it our own?” Though she put on a smile and posed for pics, in her heart, she cried each night. She longed for a baby – someone she could cuddle, fall asleep with and someone who would call her Ma.

And for me, I led a pretty normal life, and earned a small salary. My daughter was in the 9th grade now. We had bought a 1 BHK flat and were paying the EMI and  saving for our daughter’s further studies, which was taking a toll on our finances. By end of the month, we had almost no money left and we would desperately wait for the salary to be credited.

And finally the day came. The event was a huge success. We met our old classmates, teachers, laughed a lot remembering those golden carefree days, sang, danced, posed for pics, exchanged numbers and promised to stay in touch. The 4 of us decided to meet at a restaurant near college for lunch the next day. Nats was flying back the same night as she had a flight to Paris.

After the initial round of discussing yesterday’s event and catching up on each other’s lives, we fell silent. Our lives had moved on – we had seen so many twists and turns, love, betrayal, destiny’s cruelty, financial issues, stress – we were no longer the dewey eyed innocent girls.

Megha was the first one who tried to break the silence. “Hey Nats, I saw your pic with a super cute guy on Facebook; in fact I am regularly seeing your pics with him, it was at some holiday resort – who’s he? What’s cooking? Have you found your soul mate?”

Nats burst out laughing. “Oh my dear innocent friend, he is married with a kid. I am just in a casual relationship with him. He is in it for beauty and sex and I am in it for luxury and fun. It’s a give and take”.

We were baffled. This was not new to us. We knew she dated many guys and kept telling us she was still looking for her soul mate, till she finds him – why not have some fun?

Her frivolous ways worried me sometimes but I knew that she had fallen for a guy 4 years back. She wanted to marry him and have kids but he had dumped her for another girl. She was heartbroken and to escape the ache she went on a dating spree. She kept moving from one man to another but she would run away the moment he tried to take the relationship forward. I knew the mental blockage she faced and I hoped she could free herself from this mess someday.

But Pallavi was aghast. “How can you date a married man? Do you have no morals? Have you thought just once of his wife? How would she feel knowing about this dirty game the two of you are playing? This is disgusting!” We all knew why this sudden outburst happened.

She could see her ex husband and his lover in front of her eyes and she had to relive those moments of hell that she thought she had moved away from. We were already in an awkward situation and to make matters worse, Megha blurted out something really dumb. “Pallavi, my dear, I know what you are feeling, but be happy you at least have your son with you.”

“Really – you don’t need to tell me this Megha – I am happy, I don’t need a man and I really don’t need this stupid piece of advice. In fact my 2 cents to you – stop pitying yourself and observing those stupid vrats. Go adopt a baby, I have told you time and again. Stand up for yourself – there are more than one ways of being a mother, giving birth is not the only way. How long will you hide and pretend that life is all good by posting those pics and giving fake smiles? Go live a real life.”

Megha was shell shocked. She knew all that Pallavi said was true – just that she was dumbfounded that someone had exposed her false life, the illusion of a happy woman she had created.

“You have lost your mind, Pallavi, since the time your husband left; you have gone a bit eccentric. You work 14 hours a day to make up for the dent in your life, to help you forget it like a bad dream but the betrayal still haunts you, isn’t it?”

Pallavi’s face was ashen now. I just sat in silence, I was stunned. What were we doing to each other? We were best friends once and now as women we were digging up each other’s past and forming judgments rather than supporting each other. Is this why we met? We were better off without this reunion.

Dessert was served. Rabdi, kulfi and chocolate ice cream. We ate in silence and made small talk. I remembered those days when after college we bought Pepsi colas which cost a mere Re1 and happily chatted and laughed as we enjoyed the cola. Today we had money to afford the best desserts, we were seated in a posh restaurant but we were far apart, in different worlds. We split the bill and bade goodbye.

In our hearts we all knew this was the reunion where we part ways never to meet again. We had moved on in life- had seen our share of bitter days and that had hardened our hearts. I wish we could be that pillar of support to each other – we could lend a shoulder to lean on and the sisterhood that we were once so proud of would still be intact – but alas it wasn’t.

Was it fate who was so cruel to some of us or was it we who failed to make the most of this moment and turn it into a memorable event, we will never know. What an irony – the reunion which was supposed to bring together strayed hearts and build bridges, ended up burning bridges.

“People Assumed Then That We Were A Couple. For Them We Were…”