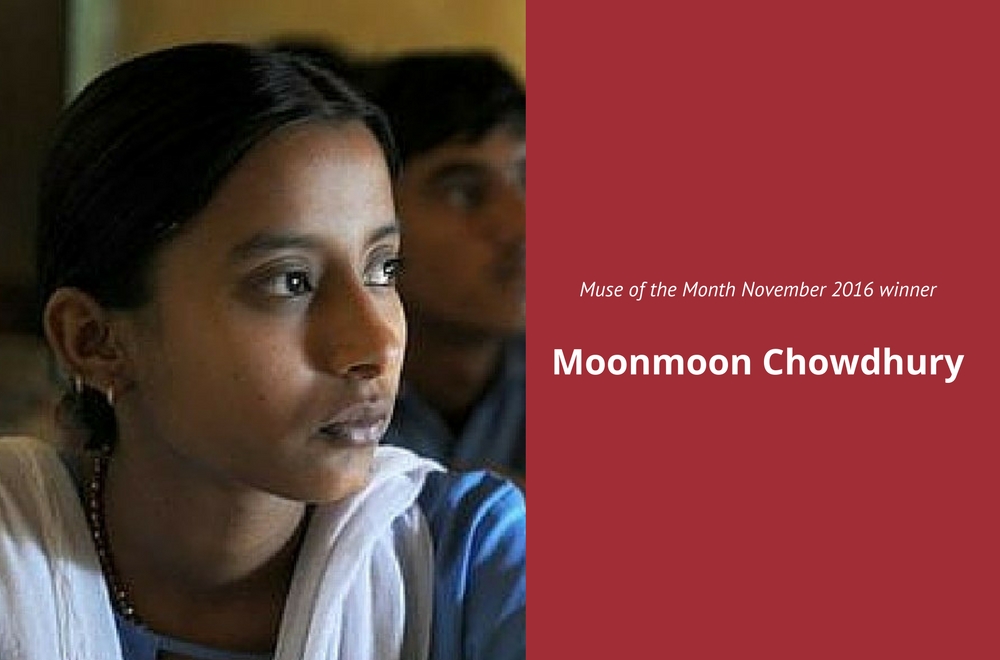 “Girls were seldom encouraged to dream about creating a new world for themselves, independently …Pratiksha had been the rare, lucky exception.” A short story.

Here is the first winner of our November 2016 Muse of the Month contest, Moonmoon Chowdhury.

Pratiksha had been eagerly waiting for Friday. With bated breath, she walked towards the crowded entrance of the cyber café. There was that tall guy who had borrowed her pen one day, and then there was the popular couple. There was the intellectual bespectacled girl who always had all the answers and the shy, lean girl with a chronic quizzical look. Waiting. Though Pratiksha wasn’t talkative, she was friendly enough to smile and greet. However, on that momentous Friday, she was an amnesiac with a sweaty forehead and a terribly rapid heart rate, too lost to smile. She had been trying to figure out whether she was the only one waiting with a sickening anticipation.

The journey to the crowded entrance of the cyber café had been a protracted one for Pratiksha. In between the terminals, there were stories of humiliation, hopelessness and emotional upheavals. She had broken down and gathered her pieces together.

Born and raised in a small town, Pratiksha and her parents had to often bear the brunt of unsolicited harsh words. “Teach her to cook. A girl’s place is in the kitchen,” her relatives and neighbors would declare in unison. “Pratiksha isn’t fair and beautiful like her sister. Don’t delay her marriage beyond 18 or it might be too late”, ‘genuine well-wishers’ would remind her father every now and then.

All of 17 years, Pratiksha was a shy, introverted, timid girl with a terribly low self-esteem. The hundreds of negative words that she had to confront everyday had conditioned her subconscious mind. “You are just a girl”, “You are no good”, “You can’t even cook or stitch”, “You will have a tough life as someone’s useless wife”, “You are so useless that you will only earn humiliation and embarrassment for your unfortunate parents”.

Pratiksha was a victim to those unfair, discriminatory, demoralizing opinions and statements. Her parents tried their best to protect her but that was just the way of very little towns and villages. Everyone assumed that they had the divine right to counsel. They had broken Pratiksha, robbed her of her self-worth.

Pratiksha studied very hard because that was the one thing she really enjoyed doing. In the electricity-less evenings, she would make the kerosene lanterns at her study table, her best friends. But Pratiksha knew in her heart that not too long after her higher secondary examination, she would probably have to reluctantly embrace the ‘occupation: housewife’. That was what happened of the other girls in her very little town.

It was the season of the mangoes and litchis. Pratiksha and her family were feasting on the summer fruits, when the surprise visitor rang the doorbell. It was Pratiksha’s school principal. “Congratulations Mr. Verma, your daughter has topped our school in the higher secondary examination with excellent marks in 5 subjects”, Pratiksha’s Principal announced. Pratiksha ran into her room with happy tears in her smiling eyes.

A decision had been made that very night. Pratiksha’s father declared with joy and pride on the very next morning that Pratiksha would be sent out to the big city for further education. According to him, the topper deserved the best opportunities to excel in life.

Pratiksha was happy to hear her father’s favorable decision. Happier because he had faith in Pratiksha and getting her married off at the earliest was nowhere near the top of his priority list. That in and of itself was a privilege for any girl in that small town. The elders in her home and the ‘well wishers’ in the vicinity advised Pratiksha’s father against that terribly ill calculated step. But, his determination was un-breakable.

Pratiksha was a mixed bag of emotions during the final good-bye to her home. Excited, happy, hopeful, apprehensive and sad – all at once. The hardest part was saying a teary good bye to her father. She stood still at the hostel gate, her moist eyes fixed on the bright and bustling street till she could no longer see her father’s dear frame. She had never felt so forlorn in her life.

It was a huge transition for Pratiksha. She was not used to the ways of a big city, had never lived in a hostel and had never dreamt of being a part of such a prestigious educational institution. It was a whole new overwhelming world for her.

She had been nervous on the first night in the hostel. The senior didis had called the fresher to their room, challenging the docile girl to entertain them. She had had to dance for the first time in her life and then there had been an awkward ‘indecent’ question. One of the more kind didis had objected to the question and displayed solidarity with Pratiksha. She had guided Pratiksha to her 4-bed room and wished her good night with a soothing smile. Overall, hostel girls were friendlier than Pratiksha had expected them to be, happily sharing and helping each other to settle down in the ‘home away from home’.

The first day in her college was a brand new experience for Pratiksha. She had travelled with her peers to the college, unescorted by a male attendant, for the very first time. In the huge college auditorium, Pratiksha had felt like a child standing in front of the vast ocean. The principal’s inspiring welcome speech for the new students was still fresh in Pratiksha’s memories. She had quoted Eleanor Roosevelt “The future belongs to those who believe in the beauty of their dreams”.

Pratiksha was yet to figure out her dreams, aspirations and the road to the future of her dreams. In her small town, passing the board exam was all she had dreamt of. Girls were seldom encouraged to dream about creating a new world for themselves, independently. They were encouraged to take up homemaking and dream about a happy life with a husband and children. Marriage was a prize, especially if the groom happened to have a government job to his name. Pratiksha had been the rare, lucky exception.

In the new unaccustomed place, no one taunted Pratiksha about her lack of expertise in cooking or stitching. No one talked about or advised her on “settling down with a husband” anymore. No one mentioned her skin colour or plain looks. Her professors would quote her answers in the class.

Approvals and appreciation inspired Pratiksha to dream without fear. She had enrolled in the spoken English class to rule out her weakness. She had made it a point to converse in English with her roommates. They were kind and patient with her. The well-furnished library assisted her in making the good, excellent. She fared very well in the examinations with handsome marks. Pratiksha became more confident with her newly unearthed potentials. She was now a determined lady with a burning desire to join the civil services cadre. Pratiksha mused, “When one was re-inventing oneself, anywhere could be home”.

However, every time she visited her small town, relatives and neighbours made it a point to remind her about marriage. They would discuss her parents’ callousness in delaying her marriage. Some of them even attempted to convince her parents that Pratiksha would soon be too educated, making it impossible for them to find a good match for her. However, none of the machinations could effectively dilute or curb the determination of Pratiksha or her father. After completing her graduation with high scores, she joined the best coaching classes available for IAS aspirants. Her father had been her backbone.

Pratiksha’s books and study materials had become the focal point of her life. She studied for practically all 24 hours of the day, juggling between the long lists of subjects that had to be thoroughly mastered. She had forgotten about life beyond her coaching classes, books and notes. She had forgotten what 8 hours of un-interrupted sleep felt like and even the feeling of visiting home. ‘Single minded dedication’ was the only mantra; she had collected from interviews of IAS toppers in magazines. She knew that she didn’t have the luxury to waste even an hour. She was positive that the secluded, island-like 365 days would pay-off.

It was Pratiksha’s turn now to sit in front of the screen in the cyber café and unlock what could be a glimpse into the future of her dreams with her unique roll number. The cyber café was still crowded with all those familiar faces from her coaching center. She was unsure for the first time in a long long time. The “what if?” in her head scared her.

She took one deep breath, prayed and started typing her roll number, her cold hand still trembling. “What would it be?” she thought for the millionth time. And, then like a precious dream, she saw something floating on the screen – HER NAME. Happy teardrops started rolling down her cheeks. She said out loud “Papa, we have won!”

“Congratulations!” echoed through the waves in the air as she exited the cyber café with her head held high.

Moonmoon Chowdhury wins a Rs 250 Flipkart voucher, as well as a chance to be picked one among the 10 top winners at the end of 2016. Congratulations!

Even A Princess Has Boundaries; Otherwise Which Prince Is Going To Marry Her?