Sima Aunty — Why Is Internet’s Favourite Aunt So Alluring?

Who is Sima Aunty really? Sima Aunty of Indian Matchmaking, is a household name and now the Internet's favourite aunty. Here are the things that make her so alluring to viewers!

Sima Aunty, also known as Sima Taparia, is now the Internet’s favourite aunt! An elite matchmaker from Mumbai, she has become a household name and the subject of mass scale memes on social media.

Sima Aunty rose to fame with Indian Matching Season 1 in 2020 and has come to claim back her fame with season 2 on Netflix. Vir Das loves her and has vowed to conclude his jokes with her advice.

We may hate or love Indian Matchmaking, but we really cannot ignore it – it is a show that hits the nerve where it hurts the most.

Every Indian girl who has reached the invisible ‘marriageable age start line’, has met that one middle-aged woman, who is an aunt for all and cares for everyone’s daughter’s marriage more than the parents. (But every young woman has met an uncle too, insisting that she is no longer a girl and needs to become a wife!)

Now while Sima aunty fits the bill of that nosy aunt, rumours on the internet say not many of us can afford her bill! 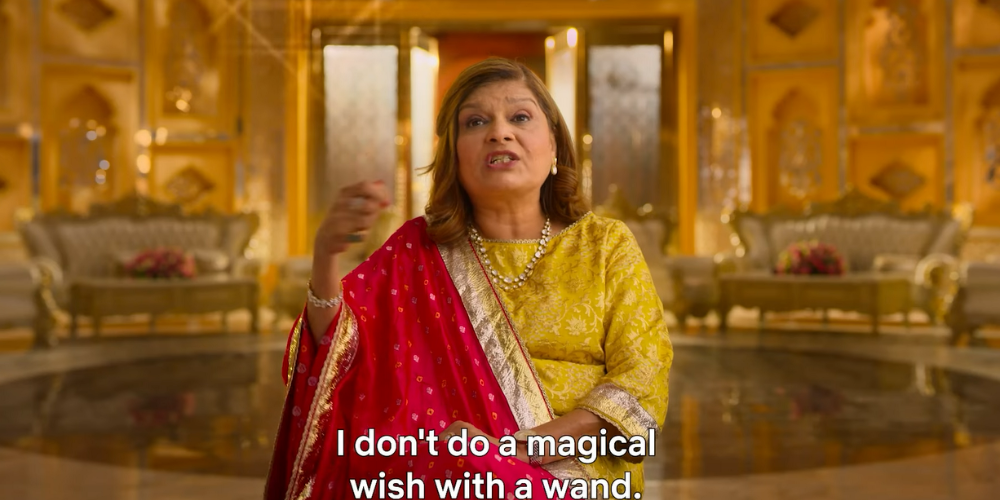 But who is Sima aunty?

Sima Aunty’s whole identity revolves around the institution of marriage. She is the daughter of an industrialist who married Anup Taparia, another industrialist, and took his surname at the age of 19. They have been married for 39 years with two kids.

She made her television debut in 2017, in the documentary, A Suitable Girl, which featured the tryst of an Indian mother’s struggle to arrange her daughter’s wedding.

After the success of Indian Matchmaking Season 1, Sima Aunty was also seen on a few tele-commercials for brands like Flipkart.

Why did she start this business?

Sima Aunty says she started matchmaking as a hobby; being born into an affluent family and married into another brought in many connections, which sparked the interest. This hobby resulted in multiple successful, high-profile arranged marriages.

Eventually, at the advice of her husband, she turned her hobby into a business. And a very successful business we might add.

Now not everyone can afford her! She provides exclusive services to the creamy layer of society and insists on making eye-contact and having a chat with her clients before accepting them.

Her clientele is not limited to the boundaries of India, but spans across the globe from Singapore, UK, Thailand, Hong Kong to Nigeria and more.

Arranging marriage is a vocation, not a profession!

In multiple interviews, Sima Aunty has stated that she has this unique ability to talk to people which enables her to understand them. Still, we wonder why Sima Aunty fails to understand the needs of young women when it comes to looking for a partner!

She sees her work as a vocation, an extension of community service. Though money is pretty much part of this vocation, she believes that when a successful match is made by her — it brings her blessings from the gods.

Again, Internet rumours say her consultancy fees start at $8000 — the money is a blessing indeed. 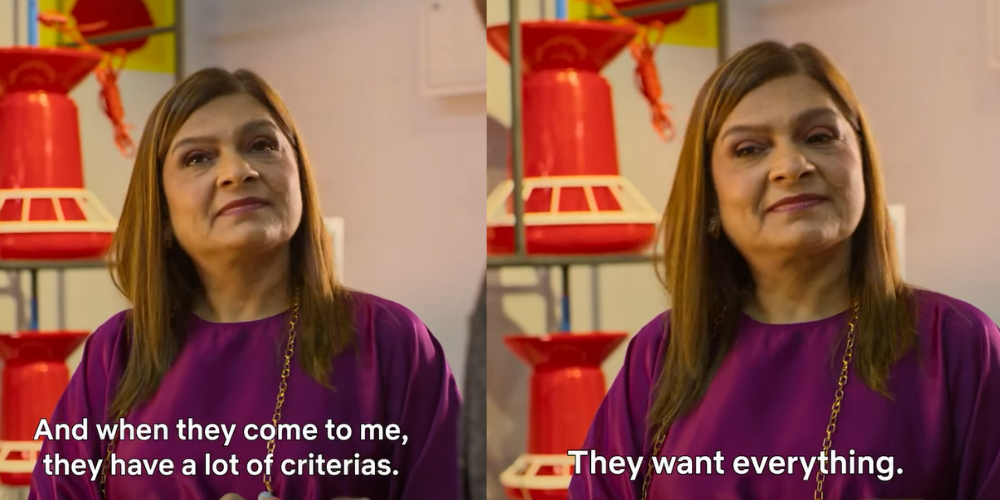 In season 2, we find despite her international exposure, her belief in the institution of marriage and its compromises has not wavered. Instead, her ideas have solidified further and paint a backdated picture of India for non-Indian viewers.

Sima Aunty confesses that matchmaking is tougher than ever before because of the younger generation, which implies that young women now have many demands which are harder to meet. Is asking for a respectful and communicative partner that bad?

From the comforts of a shiny and luxurious drawing room, we hear her say she has no magic wand and can never guarantee 100% success. I respect her honesty, she knows she can only bring people together — the rest of it is up to the parties involved in the process.

According to Sima Aunty, if 60 to 70% of client demands are met, she emphasizes — a little adjustment will make marriage between them work. She has cited her own marriage being a story of compromise and adjustment between the North Pole and South Pole.

But who will tell Sima Aunty that we do not want to be exploited in the name of adjustment and compromise like our great-grandmothers, grandmothers and mothers? We young single women are tired of giving an inch and then losing a mile to patriarchal expectations.

Previous generations of women, and men too, have suffered because it was hammered into them that only sacrifice and compromise can make a good marriage. Hence, no, thank you nahi chaiye adjustment-shadjusment.

What is her allure?

Sima Aunty, and many other not so famous matchmaker aunties and uncles, have found strange financial empowerment in this elaborate scheme of an arranged marriage market. They mine — the superstitious space between two horoscopes — and we fall for it time and again!

Criticism and frustration aside, we must acknowledge that the burden of patriarchal expectations hits every class and society. Sima aunties are not born this way, they are made.

And if it earns her thousands of dollars, why will she stop pandering to old-timey ideas?

In a country where the first thought parents have after a daughter is born is about her future marriage, blaming Sima Aunty for being rigid is unfair.

Sima Aunty’s allure lies in her views on marriage, which, though backdated and regressive — resonate with countless people. Sima Aunty might be an infinite resource for memes and jokes for the younger generation; but there are people who fiercely nod their heads when she speaks of sacrifice.

What sets her apart from others in this quest for a life partner?

According to the Condé Nast Traveller interview, Sima Aunty gets to the bottom of things. One thing dating apps can’t do is visit a potential partner’s house and check their lifestyle and family, unless it is a meet for hook-up, which sadly is frowned upon in India.

Visiting the potential partner’s house is a practice customary in arranged marriages. Sima Aunty can do it on behalf of other people!

Arranged marriages are still the most popular way to find a life partner in India, and it is because of this thorough check up. Families meet, talk and discuss, and more often than not, arranged marriages happen to ensure the social status quo is maintained. Remember khandan ka izzat that Bollywood loves?

Though matrimonial sites have hybridized dating apps with marriage as an end goal, there is still a lot of room for the matchmaker.

Sima Aunty provides a service to high-profile clients, some of whom are NRIs with ‘traditional Indian values.’ She does the scouting and the background check, and presents the best options to people, which makes her a reliable matchmaker. How to deal with a Sima aunty in our live?

It is not Sima aunty’s fault, that in every household of this country we have an aunt (or an uncle!), asking us to overlook certain follies in a man or woman. She is just the person with a loudspeaker in her hand right now.

There is an aunt in the corner of our neighbourhood, asking us to settle down with whatever scraps of happiness are thrown at us in the name of tradition and culture.

There is an uncle in a tea shop egging our parents to marry us off like we are old furniture, others telling us to choose a man who meets certain criteria; his age, his finances and his family.

Sadly, the burden or the task of calling out these patterns of patriarchal abuse falls on us, the young women. Every time an aunt or uncle speaks about the great institution of compromise, we have to challenge them instead of politely avoiding them. It is time for a counter-attack.

Question them, the things we wanted to ask Sima aunty, ask them to elaborate the parameters of compromise, and how much is ‘thoda’ in thoda adjustment? And if they still don’t back off, may the stars help us! 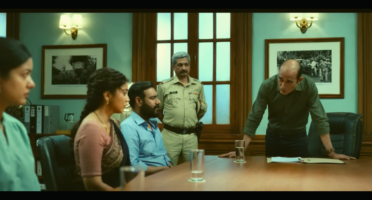 Drishyam 2: Why A Film 'Hero' Can Get Away With Murder 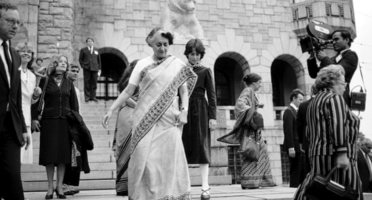 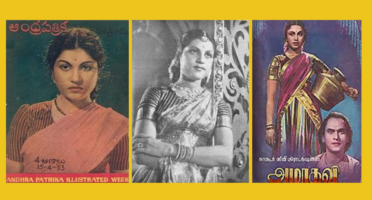 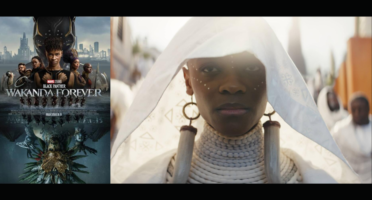 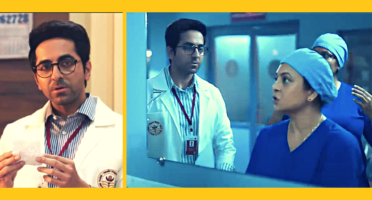 Dr G: A 'Funny' Attempt, But Shouldn't Empathy For Women's Pain Be A Given In Doctors? 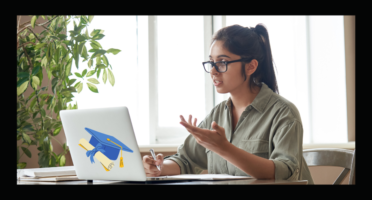