Use Lockdown Time To Call Your Mom, Quips Comedian Radhika Vaz In A Delightful Interview

At 47, comedian Radhika Vaz hasn't run out of steam, and a rollicking exchange gives some gems we can take away from. Read on.

At 47, comedian Radhika Vaz hasn’t run out of steam, and a rollicking exchange gives some gems we can take away from.

As a teenage girl I was forced to read newspaper everyday by my parents and I found this the highest form of torture back then, I would rather disappear into the pages of a good fiction than read the dreary editorials every day. However a column on bottom left corner of the editorial page of TOI with a tiny headshot of a badass looking woman in a fiery red lipstick always managed to add joy and laughter to these otherwise dull mornings.

The column was called ‘Read it and weep’ written by none other than my guest for today, comedian Radhika Vaz. So when I was assigned to interview the OG Queen of Comedy, I had to dial back my fangirling, and appear calm.

She knows her lingo people!

Radhika started her comedy career almost 15 years ago. On her title as the *OG Queen of Comedy and the changing scenarios for female comics in India she says,

“Thankfully there are a multitude of *Ogs and GOATs and BAWSE babes (do I have the lingo down?) who have made a huge impact on the scene. The sheer number of fearless females has increased exponentially (please note my fly mathematical terminology). But more than that it’s the subject matter – they are talking about stuff that only women could possibly experience and observe and that is what I like best. Many of them are not trying to fit in to what they think the average audience member (straight man) wants to hear.”

Advice to young comics and her feminist icons

I was dying to get some career advice from the woman who has done it all. Ideally, I should have waited till the end but I couldn’t contain myself so here’s her advice to young women starting their career in comedy and other creative fields,

“I think it’s just important to write what you think is funny. Don’t worry too much about serving any agenda – feminist or otherwise. It’s super feminist to just do you!” 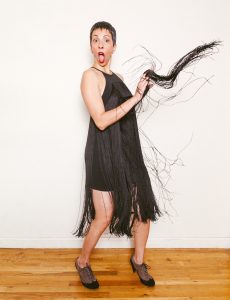 That is a really great advice, the purpose of Feminism is to give you freedom and not restrict you into serving any agenda. So, next time someone tells you that it’s not feminist to be a stay at home mom, know that they couldn’t be more wrong.

She has been a feminist icon to a lot of young girls, including me. On being asked who are her feminist icons, here’s what she had to say,

“Oh gosh it’s a growing list. Every year there is a Dutee Chand or a Faye D’Souza added to my list. But if I had to really look back to my childhood it was comedian Lily Tomlin and tennis ace Martina Navratilova that made me so proud to be a woman.”

On her journey from advertising to an author

Radhika started her career in advertising, and then transitioned into comedy and writing. Her web series Shugs and Fats won the prestigious Gotham Awards last year, she has done multiple standup special and has also written a memoir, Unladylike currently available on Amazon.

According to her the favourite as well as the most difficult part of her journey was one and the same.

“My favourite may just be the roller-coaster of not planning and not know what would be next and just grabbing all the opportunities regardless of whether I knew what I was doing or not. Ironically that was also the difficult part. I hate the instability and risk,” she says.

As with every woman who takes bold choices and decides to be unapologetic and fearless, Radhika too has received a multitude of hate and trolling in her career, her decision to not have children and opinions on sex, sexuality and desires have received a lot of negativity.

On being asked how she handles the trolls, this was her reply, “I am very lucky I have a supportive family and friends and the community of female comedians is solid too. This is where I prefer to look. Ignoring online trolling is remarkably easy once you decide to. I went off Twitter all of 2019. And now that I am back I tend to post and leave. I don’t check the comments anymore.”

One such taboo topics that interested me was menopause and the lack of conversation and awareness about it.

This is what she has to say about it, “I am talking about it in my live act. And I probably need to do that even more. I will. I love being in menopause. Once you get the hang of the hot flushes and depression it’s pretty awesome. No more periods, no panic about staining my best undies. I like the upside.”

On beauty and being called “beautiful”

In her memoir Unladylike she talks about wanting ‘blue eyes and blond hair’ and binging on beauty pageants and wanting to belong. On how her relationship with beauty has changed in retrospect and what her advice to younger women was on the topic was, she says, “choose who you look up to.”

“I am 47 to be exact. So I am finally over a lot of insecurities,” she says. “But it took a long time. And I don’t judge anyone for having issues around the way they look – I mean look at the world around us. But while Instagram had the Kardashians it also gives us Lizzo. And lots of other representations of what it is to be female. Choose who you look up to is all I can say this ripe old age.”

There has been increasing amount of controversy lately around the word ‘beautiful’ and it being used to describe women especially one as formidable as comedian Radhika Vaz, with some arguing that it diminishes women to their physical attributes, here’s her view on the matter,

“It always depends on who is saying it. But I call men beautiful too. And animals. And trees. It’s just a word I don’t want to give it too much power.”

#Metoo and the feminist movement

She has spent a large chunk of her life in New York and Mumbai, working and performing in both places.

Here’s what she thinks on the contrast and similarity between the two and their feminist movements, “I can’t say I have any real knowledge on an entire movement! But I guess massive cities are similar in more ways than they are different. So many women live alone, have jobs and take care of themselves financially. Many of them won’t have kids, some may not get married. You also see more out gay women in cities like Mumbai and New York. There are loads of creative women in both cities so that makes life pretty unique too.”

Even with the lack of initial success, she feels optimistic about #Metoo in India,

“I hope it hasn’t failed. Maybe it has been set back. But if we all keep reminding ourselves that we don’t have to stay silent then it will grow gradually till it becomes a real thing,” she says.

Here’s her list of binge worthy shows to watch during the lockdown,

After reading her memoir Unladylike (check it out, it’s on Amazon), I couldn’t resist asking if we can expect another book from her. To which she quipped, “I am focused on learning how to write for film so I don’t know! Let’s see.”

Here’s her last piece of advice for you to take away, and to act on during lockdown. Something that I whole heartedly agree on: “Call your mother!”

*These are all from the pop culture lingo used by fans. OG – Original. GOATs – Greatest of all Times. BAWSE – Boss.