Arunima Sinha: On Top Of The World

Meet Arunima Sinha, the first female amputee to scale Mount Everest. The word impossible does not exist in this Indian woman’s dictionary. 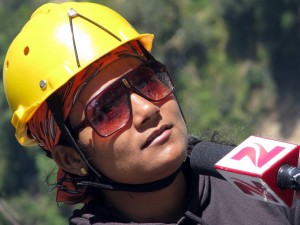 The word impossible does not exist in this Indian woman’s dictionary. Meet, Arunima Sinha, the first female amputee to scale Mount Everest.

In May 2013, Arunima Sinha created history by becoming the first female amputee to climb Mount Everest. A national level volleyball player, she lost a leg when she was thrown out of a train for resisting a robbery attempt. But instead of losing hope, this Indian woman gathered herself and rose above her disability to achieve the unthinkable.

Today you are being spoken about everywhere; the spotlight has been turned on you. How does all the sudden attention feel?

Arunima Sinha: Wonderful. Earlier, there was one Arunima whom no one knew and today there is an Arunima whom everyone is talking about. I am getting written about everywhere. I am even getting offers to make a movie on my life. It feels good. After my accident, I was facing a lot of condemnation even though I was the victim. Now I am very glad that so many praises are coming my way.

Why did you decide to climb the Everest and when did you make the decision?

Arunima Sinha: It might sound crazy, but I took the decision right when I was admitted in the hospital. I was scared about what I would do with my life since my leg had to be amputated. But I really wanted to react to all the bad things that were being said about me. I did not like that people were pitying me so much. It wasn’t even their fault; the situation itself was terrible. But I am a sportsperson and I wasn’t happy that everyone was looking at me with such pity in their eyes. I really wanted to prove to everyone and myself that I could still do something with my life. I decided right then that I wanted to climb Mt Everest. It became my dream since then.

How did your family react when you told them about your decision to climb the Everest?

Arunima Sinha: The first person I shared this decision with was my brother. The whole journey became a lot easier because of the support that my family gave me. They were worried but also proud that I hadn’t lost hope after my accident. They completely supported my decision. Even though mountaineering is an expensive sport, my father told me not to worry about the money at all. He said that he would even sell our house to send me to the Everest if I really wanted to do it.

How did you go about with the whole process after leaving from the hospital?

Arunima Sinha: I met Bachendri Pal on the very second day after being discharged from the hospital and told her that I wanted to climb the Everest and needed her guidance. She was absolutely shocked to see me and had tears in her eyes. She asked me to prove that I was capable enough to climb the Everest.

In the training process, there were a lot of hurdles that I faced because of my handicap. Other people would get ahead of me while I would struggle and lag behind. I used to sustain constant injuries and feel breathless because of the strain on my body. But I kept trying. Bachendri Pal realized my passion and determination and called me her sherni. She was one of my strongest supports in the entire journey.

What was the toughest part about climbing Everest?

Arunima Sinha: I think more than physical strength, you need a lot of mental strength to conquer the Everest. Every step has to be taken carefully and it is very important to not let fear take over your mind. In my case, there was the added pressure of the amputated leg which I had to take care of.

Did you, at any point, think that you would not be able to do it?

Arunima Sinha: Many times. On the mountains, I would be in situations where my body had completely stopped supporting me but the will power was there. It was this will power that pushed me out of dangerous situations and kept me going. At one point of time, in -60 degree temperatures, my prosthetic leg was threatening to slip off. I was caught in a very bad situation as I couldn’t even take my gloves off to support my leg for fear of frostbite. We also had a limited supply of oxygen and it was important to reach the basecamp. I had to drag myself till the camp finally.

Apart from mountaineering, what do you like to do in your spare time?

Arunima Sinha: I was a national level volleyball player before my accident and I like to play volleyball, though now I can’t play it as well. I used to run a lot earlier but my speed has reduced now. I still try, though. I also like spending any time I get with my family.

What next for Arunima Sinha?

Arunima Sinha: I practice running and I am inspired by ‘The Blade Runner’ Oscar Pistorius. I want to participate in the Commonwealth Games and the Olympics and I’m working towards that. I am also leaving for Africa in a few days to climb the Kilimanjaro. It is my dream to conquer the highest peaks of each of the 7 continents. 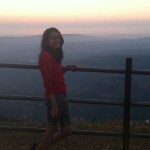