The World Ignores Women Of A Certain Age, But This Homemaker In Photo Prem Isn’t Having It

Photo Prem is a social psychologist’s delight. Behind the seemingly routine hesitation of a woman deeply uncomfortable with her picture being taken, lie extensive layers of mental barriers, cultural conditioning, a rich inner dialogue and abysmal levels of self-esteem.

The film spins this basic premise into a lighthearted outing suffused with bittersweetness.

Her name is Sunanda Kulkarni. But you would have to parse carefully through the movie to piece that together. In an existence that may seem familiar to many women across India, she is simply called Maee. Mother. Equal parts honorific and generic descriptor, she is addressed only as such, as she labors under the weight of social roles throughout her exploration of self and identity.

Far from being a grim social commentary though, Photo Prem is an amusing, lighthearted movie with undercurrents of pathos—but only if you look for them. It follows a middle-aged homemaker as she realizes through the death of an acquaintance that there exists no acceptable photograph of herself—just like the woman that passed suddenly. 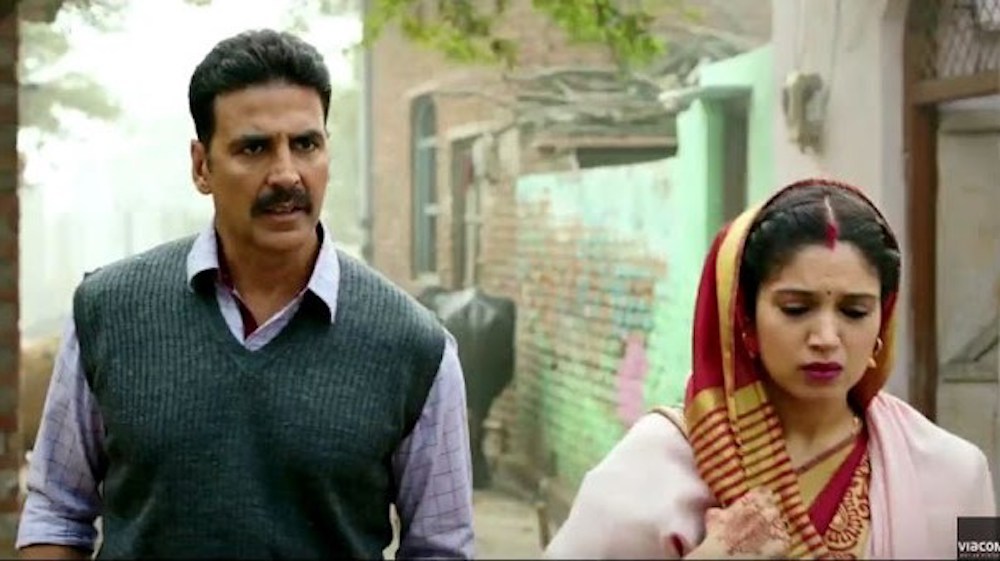 The story unfolds through a comic lens, as she doggedly peruses newspaper obituaries, waiting for the dead woman’s picture to appear. It never does, because her family didn’t find a recent photograph. It leads her on a journey of questioning her own existence, her identity, and her legacy, all hinged on the fact that at 55 years of age, she possesses no photograph of her solo self worth framing.

What the camera cannot see

With a rich and constant inner dialogue indicative of a woman who cannot afford to speak her mind, Maee unpacks what this revelation means to her, and we are privy to her varied and amusing attempts to remedy the situation.

It is amply demonstrated how the protagonist suffers from acute camera shyness. Her deep discomfort as the subject of a lens gaze makes us wonder how much of the struggle is just her personality, and how much is related to the constant dismissal and minimizing she faces from her spouse and daughter. While she lies awake at night, planning how to leave a suitable picture of herself behind in the world, she is barely seen in her daily existence, blending into the background in her drab sarees and mundane chores. Here then, is a whole person with a vivid inner life and no one but her part-time domestic helper to share it with.

That One Perfect Shot

As the movie progresses, we see her resolve waver, then strengthen, and then forge forward, as she gathers her nerve and resources to make her photo dream come true. From recruiting a young neighbor to take web camera pictures of her, to practicing a range of poses, to gathering funds for a professional photoshoot, her single-minded focus highlights her desire to be seen. In a world where women ‘of a certain age’ are rendered increasingly invisible, and in a country where they are hardly ever spotlighted to begin with, Maee’s is a story of unusual courage, told with genteelness and a background score determined to keep the narrative lighthearted.

In a telling juxtaposition, even as the world around her ignores the person she is, viewing her only in terms of her social roles—wife, mother, housewife—the background score reminds her she is her own companion, and exhorts her not to be a stranger to herself and light the spark within.

Her burning need to leave behind a ‘legacy’—pictorial evidence of her existence, around which stories can be woven for grandchildren not yet born—appears to stem from the need to seek validation for a life lived in the shadows. From being overlooked, unseen, and laughed at in the manner of casual sexism we as Indian women are so intimately familiar with.

It is to the movie’s credit that it delivers all the seriousness of these deeper issues without sacrificing on tongue-in-cheek humour.

The small downside is that apart from the central character of Maee, played brilliantly by the talented Neena Kulkarni, and the spark of spunk showed by the maid (played by Chaitrali Rode), all the other characters are flatter than a two-day-old chappati and the movie sags around them.

Here is a film that will meet you where you are at. If it’s a chuckle and light entertainment you are looking for, you can relate to the many fun moments and the near-universal relatability of photographs in this current Age of Selfies. If, however, you are willing to wade in deeper and question beyond what is presented on the surface, the film will add to your questions and prod you to think:

What do you recall from your own family pictures?

Were the women ever placed front and center or were they leaning off the edges, ready to be whisked away by the demands of babies or housework at a moment’s notice?

What did your grandmother look like as a child? Was her picture even taken?

Are women’s pictures missing like their names on plenty of family trees, yet another erasure from history?

Were the women you know permitted into the space in front of the camera? How were they required to face it? Were the smiles all theirs or were social expectations foisted on their faces?

How has life changed for us, now that nearly everyone reading this piece has a camera phone and a selfie-ready arm?

As Maee takes to writing her obituary as a way to control the narrative of her life, we find ourselves thinking of the ways that photographs—or even the lack of them—speak about our own narrative. The surprise ending, so swift and brief that you wonder if you really saw it, turns the joke on us, reminding us that for all our efforts, in the end, we view people through our own personal lens, and not as they wish to be seen.

Quite some prem and many lingering thoughts for this subtle film that still manages to pack a punch.

The black and white challenge is trending on social media for 'women supporting women', but what can you do in real terms?

The black and white challenge is trending on social media for ‘women supporting women’, but what can you do in real terms?

Sharing photos is just one way in which we can lift other women up. For more robust empowerment and long lasting change, we need to focus our actions and intentions in more practical ways. Here are a few things that any woman can do, to empower and support the women around her.

Let us do a little thought experiment, shall we?

These are women who stood up against all odds, and have often been pathbreaker in what they have done.Strong women who always said, "I Can!"

These are women who stood up against all odds, and have often been pathbreaker in what they have done.Strong women who always said, “I Can!”

These women faced opposition, challenges, derision, antipathy and more, in their personal or professional lives, or both. But, that didn’t stop them. They simply did their work. No drama about their ‘ill-fate’. What they did were their duties without any distractions and they got results.