Dil Chahta Hai Revisited: Don’t ‘Pursue’ A Woman Who ‘Belongs’ To Another Man; Who Cares What SHE Wants?!

A tale of two douchebags: Dil Chahta Hai revisited. It was a cult movie at the turn of the millennium, especially with an unusual-for-Bollywood Sid played by Akshaye Khanna, but the rest...

It was August 2001. Dil Chahta Hai had just exploded onto the scene, heralding a New India, and Koi Kahe Kehta Rahe instantly became an anthem for pride and belonging to our country.

That this coming-of-age movie ushered in a sparkling new era of Indianness and went on to become a cult film is well known.

As young twenty-somethings, we now had a cultural marker that spoke for our identity beyond elephants and thick accents. If you are steeped in nostalgia for those heady days of “DCH”, I get it. The ultimate bromance and road trip movie was a breath of fresh air in those early years of the new millennium. How well has it aged over these past 20 years, though? Let’s revisit its many premises.

He engages in creepy stalker-ish behavior at his graduation party, insisting on holding Shalini’s (Preity Zinta) hand and coercing her to dance with him after she declines. Nope, Aakash certainly hasn’t heard of consent!

The sole reason Aakash backs off and ceases his persistent behaviour is because Shalini’s fiancé shows up and gives him a shiner.

Being another man’s ‘property’ is the language toxic masculinity understands, but a simple “no” from the woman in question? The Great Male Ego is too ginormous to see over it.

Spooking is cool, sentimentality is for suckers

Playing on a woman’s fear to get her to join you on a rollercoaster is kosher, of course, like Aakash does with Shalini.

Getting her a balloon or remembering dates and events significant to your relationship, like Subodh does with Pooja? Nah. Let’s make that seem so OTT that all the men who forget anniversaries and birthdays feel seen and understood. What. Ever.

So you hang out with a girl for weeks on end. Share a few ‘moments’. Pretty much know that you’ve fallen in love with her. But then you leave her hanging, because direct, honest communication is for sissies and you’re going to stuff those feelings down till you choke on them. 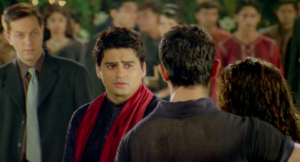 And then you show up to her sangeet and proceed to tell her everything you could have mentioned in private weeks ago. In front of 300 people. Who cares if it mortifies her? This whole thing is about the toddler in the relationship anyway!

When in doubt, choose between two douchebags

Shalini sure knows how to pick ‘em! One a controlling, abusive loose cannon, who thinks he owns his partner, and the other, a rejecting, emotionally stunted brat who can’t be consistently available to her.

Both Rohit (Ayub Khan’s character) and Aakash are punch-happy, possessive men, who glorify violence in the name of ‘protecting’ their partner property. It doesn’t occur to them to show her respect by asking for her opinion and honouring her choices. And by being a doormat, making mealy-mouthed attempts at sharing her feelings, and taking what they dish out, Shalini just ends up choosing one douchebag over another!

They’re experienced in bed, so huzzah, but it’s apparently inappropriate to fall in love with an older woman’s personhood. After all, men want women young and nubile, so they will tolerate their breadcrumbing and make do with the emotional bare minimum. The only character who actually admires and appreciates a woman for the depth of her whole self—Sid—is ridiculed for ‘being sentimental and socially inappropriate’. 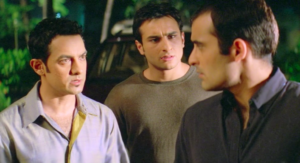 Right. Why be kind and interested in her mind when you can be brash, offensive, and switch women every two weeks?

To the movie’s credit, the story arc of Sid and Tara (Dimple Kapadia) plumbs the depths of vulnerability a man can experience and bring to a relationship of any kind.

Sid shows up as his authentic self, without the need for a veneer of machismo. He is comfortable being interested instead of being interesting. His openness, gentleness and quiet I am here-ness when Tara has an emotional breakdown is on offer, even if Tara does not quite accept it.

Freed from social expectation of what a romantic heterosexual relationship should look like, they deep dive into each other’s artistic minds, and enjoy each other’s sensibilities in a way no other character in the movie even attempts to. (And no, Shalini’s blow-by-blow interpretation of the opera doesn’t count.).

So does Dil Chahta Hai redeem itself, other than giving us Sid?

Yes, I think, in many ways throughout the film.

It offers us gems from Sid’s character. He is okay with not having his emotions reciprocated and is content to keep his feelings to himself, knowing they are not shared by Tara.

It gives us a vulnerable, unsure Sameer in direct contrast to the cocky Aakash, someone who covers up his nervousness with a goofy sense of humour, unearthing his humanity in the bargain. 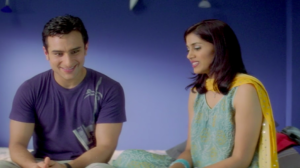 A total of two adult men cry in this movie, a feat that must be recognized. In sharing their fears and despair, the movie gave young Indian men permission to show their vulnerable selves, and some woman somewhere has benefited from this.

I’d vote for a Dil Chahta Hai 2, just so see if there has been any emotional growth in the characters in this age of consent, the MeToo movement, and revisiting patriarchal tropes. Or maybe I’ll just save the excitement for Jee Le Zara, the upcoming women-on-a-road-trip movie. Let’s finally have the women on the road, twenty years later!

Bhuj: His-Story Glorifies Only Men Even As Women's Work And Lives Are Sacrificed For War