Dear Deepika, Your Words Belittle Both – Homemakers And Women Who Work Outside Home

Always in the spotlight when a movie is releasing, this time Deepika glorifies the ‘dutiful wife’ playing second fiddle to an achiever husband, at the promotions of Ranveer’s new movie ’83. #Facepalm

Deepika does it again. Every time without fail, just before the release of one of her films, she does something or says something which puts the entire nation’s focus on her.

Her new Instagram post is a picture from the movie ’83 where Ranveer Singh plays the role of our very dear and legendary Kapil Dev. Deepika is incidentally playing the role of Romi Dev, Kapil’s wife. 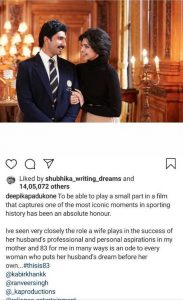 She concludes with “#thisis83”

With so many followers, mostly our youth, I wish she was a bit more careful with her actions and words.

It is not ok to just say or do anything for promoting a film.

Does she mean that all the women who do not give up their careers for their husbands’ aspirations are selfish?

Is she going to do the same thing when she goes ‘the family way’?

Why not make the ‘sacrifice’ gender neutral?

With so many facilities now, it has become easy to have a perfectly normal family life even if both partners are growing in their respective careers. Why is she then praising women who sacrifice or expecting women to sacrifice?

It would have been nice if she would have said that it’s an ode to the partners who sacrifice their careers for their spouse. While I still don’t agree with it, there can be exceptions were a partner may have to go slow in his/her career for various reasons.

So why an ode only to women? Because she thinks only women are required to sacrifice?

Does everything have to be about promoting a film?

I know actors can get to any level to promote their film.

But it’s not ok always, when small impressionable minds are following you.

It’s not ok to just go stand with people who are protesting and not talking about it anywhere. What was it that she achieved by just standing there except appropriate the protest for her own ends? It just created a furore. I wish she had spoken whatever her views were, that is if she had any.

It’s not okay to say anything just to promote a film.

I wish she would have said something inspirational and asked woman to support their partners while nurturing their own careers.

I wish that younger kids don’t get inspired by everything she does or says. Because not all of it is what they should learn.

60 Years On, Hitchcock’s Vertigo Still Reminds Us Of Some Hindi Movie Heroines