My precious daughter has Down’s syndrome, and though I’ve dealt with the pain and depression that came my way, at some times emotions get the better of me!

It was the orientation day in my daughter’s new class, something where all parents officially meet the new teachers for the first time for introductions. I was totally geared up to tell the new teachers about my daughter and to make sure that they are not too judgemental about her ‘extra chromosome’ before they even meet her.

As soon as I entered the class and took my seat, I started observing both the teachers. Trying to understand their thought processes through their words, measuring their sensitivity quotient, their pace of talking and their body language; I didn’t know why I was doing this or if it was my subconscious mind working overtime, but I was wondering if they were speaking too fast for my daughter, or if they would wait enough to make sense of her unclear words?

My mind was playing with all these thoughts, when one of them started addressing us all. I brought my thoughts back to the class and started listening to the activity one of them was telling us about.

It was an activity which all of us parents were supposed to do. We had to either draw or write anything about the dream that we have for our children. According to her, it was very simple! She explained, “Where do you see your child 10-15 years from now? What do you see for them in the future? Or what kind of dreams do you have for them?”

She gave us ten minutes and a blank paper along with some stationary, and sat in the corner with some papers to sort. All parents got down to building their dreams for their little ones. I started doing the same. “This was going to be an easy exercise,” I thought. I was going to sensitise the whole class by making an impressive speech about how my daughter changed my world. I was going to tell them how a child’s diagnosis or special needs do not define their worth, and how she has changed me and my family for the better.

I sat down to draw, but couldn’t move my pencil from the first dot I made. My thoughts began to wander off. What dreams do I have for her? Or whatever I have, can they even be called dreams? I did not want to go down that road. It had taken me a long time to come out of that hole.

I immediately remembered the conversation I had with my mother when I was heavily pregnant the second time. She was teasing me if I would have a son again, what would I do (She knew I wanted a daughter for the longest time). I instantly replied that I would try again and that I will keep trying until I have a daughter. Until I have a daughter who is the world’s most beautiful girl, the one who I would go to watch movies with, who would take me to shopping, who would share her first crush and her first love with me, who would watch ‘Pretty Woman’ and ‘Sleepless in Seattle’ with me, who I would say goodbye to when she is going abroad for some Ivy League college, who would look the most ravishing in her wedding dress and who would hold my hand when I am really old and sick and will make me smile. I want that daughter and God cannot not give me my little girl.

The next moment my overworking mind took me to the day when I saw her for the first time. When time stood still because she was the most beautiful little girl I had ever seen and had the most sparkling eyes. I recalled all my dreams and took a deep breath, inhaling her smell and keeping it in me forever.

I also remembered the day when the doctor gave us the diagnosis of her extra chromosome. I remember the howling, the crying, the disappointment, the frustration and the depression that took a year off my life and almost swallowed me alive. I also remembered the day when I promised myself that I’ve cried enough and that I’ve mourned enough for the girl I didn’t have and from now on I would like to celebrate the girl I have. That day was the beginning of my new life, my new journey and my new dreams for my daughter.

The maid’s voice brought me back to the orientation room and I cursed myself for keep going back to those years. Most of the parents were done with their dreams about their children while some were still giving the final touches. I quickly got back to my senses and started making a drawing. I divided the sheet into four parts. In the first section I made a stick figure with a ponytail boarding a bus, in the second section the same figure was going out with her friends, the third section had this stick girl working in an office and the last one was her smiling with her mother. I was almost done when the teacher asked the parents to get up one by one and explain whatever they have written or drawn. I was happy to be seated second last because I wanted to fill my art with some bright colours.

One by one the parents started standing up. The first mother had drawn a tree and a bird. She said, “I want my daughter to fly like a bird, go out, be happy, take risks, achieve the unachievable and live her life to the fullest.” I could feel a tear in my left eye.

The next one had made a girl waving her parents goodbye at the airport. This mother shared how she loves to travel and would like her daughter to see all the best places in the world. She also said that she would totally support her daughter if she wants to do it all alone because the mother could never do it that way.

My eyes started welling up with water. I got a tissue, wiped the tears off and scolded myself. It took about 20-25 minutes before everybody was done describing the dreams they had for their children. Some wanted them to make a mark in the world, some wanted them to serve the society by being a doctor or a teacher, some had written poems, beautiful heart touching poems about how they want them to touch the sky and know no limits.

I was hearing it all! All those dreams were making me jittery. I was feeling a pain that I had not felt in a long time. I was getting angry at those people and angrier at my own self. I wanted to tell them that dreams can change: that dreams do change in a split second. That I had exactly those dreams about my daughter, but now my new dreams for her are mostly about her being able to board a bus alone, fix a meal for herself, have a few friends, to get a job (any job) or to be accepted by the society. And no matter how much I hated myself for thinking on those lines, I could not stop. I hated the fact that I did not have control on where was this all going. I could hear my thoughts so loudly in my head that I had to shut my eyes really hard to breathe.

Just at that second, the teacher called out my name and I stood up after promising myself that I was not going to sound or feel depressed today. I was not going to let this day win; I was going to make these parents understand a little more about my daughter so they would sensitize their own children. I would tell them that dreams are dreams, small or big doesn’t change a thing!

It took me a minute to take control of my racing thoughts when I finally held the paper in my hand and started speaking. I could barely say good morning when my throat choked, my eyes filled with water and my legs gave way. The teacher came to me and kept a hand on my shoulder saying she understands! The parents nodded in agreement. What! No! I didn’t want their sympathy. Hell! I wanted to try again and I did but in vain!

I didn’t want it to go this way. But it was already late and I didn’t want to extend the drama. I excused myself out of the room, went straight to the washroom and cried my heart out. Why on this earth did I behave that way? I thought those days were over. I was cursing myself for being so weak and letting my emotions get the better of me. I thought I had buried those emotions somewhere deep and that I would never have to deal with those again, but that wasn’t true. I wondered and am still wondering if the pain ever goes away?

Author’s note – Those who know me should also know that this was one of the incidents and now I don’t really dwell much in guilt, sympathy/empathy cycle or other such thoughts except for sometimes like this. 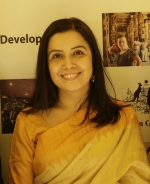 Blink… And There Goes One Academic Year Of My Pre-Schooler; Lost To The Pandemic

As A Single Parent, I’m A Mommy Co-Learner With My Daughter, Not Just Her Mother!