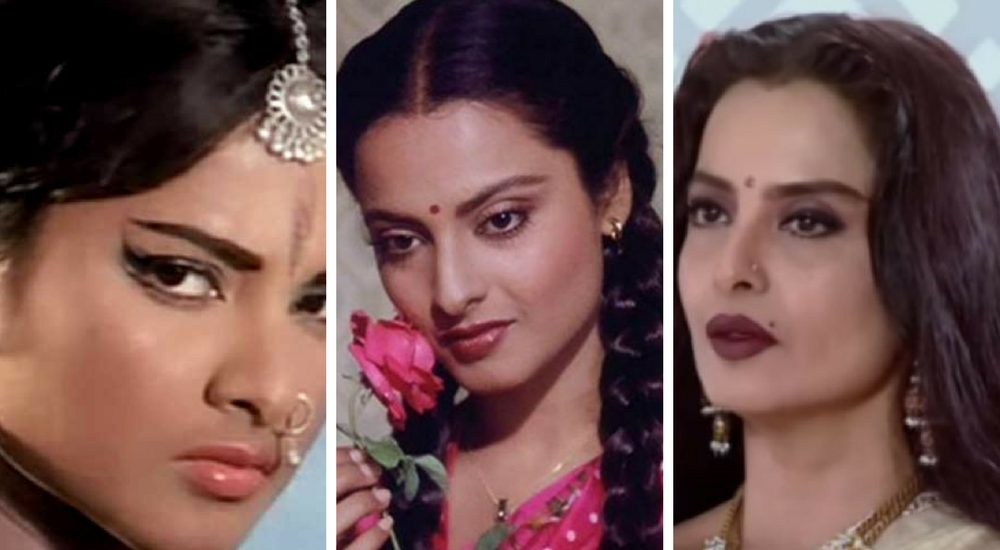 Why Rekha Is An Inspiration For Millions Of Indian Women

An extraordinary actor, Rekha has nevertheless battled a lot of personal demons and won, and is today undoubtedly a Diva to contend with.

It was at three in the morning the day post my birthday and I was struggling to finish a murder mystery for a contest when I saw Rekhaji liking my tweets and also re tweeting them.

I stopped reading immediately. I could not believe my eyes. I had just replied to a question asked by Agent of Ishq on a song that I love, and I had mentioned Rekhaji’s song sung by Asha Bhosle from the movie Ijazzat: “Katra katra milti hai Katra katra jeene do Zindagi hai, zindagi hai Behne do, behne do Pyaasi hoon main pyaasi rehne do Rehne do na!”

Born Bhanurekha Ganeshan to south Indian actors Gemini Ganesan and Pushpavalli, she was deprived of a happy childhood, one of the reasons being financial crisis. She never really had much interest in studies so she opted for films since she was a daughter of film stars.

She was only a little girl of fourteen when the director Biswajeet forced himself on her into a kissing scene. Rekha could not protest as she thought they were powerful and could ruin her completely. The camera rolled when the producers happily declared their discovery of a ‘bold sex kitten’. That was at the beginning of her career, and after that too, her life wasn’t easy; she had more than her share of personal tragedies and professional disappointment.

Despite all that, Rekha still remains among the twenty top lead actresses in Bollywood film. Though people loved her for her sexuality and intrepid roles in several movies like Umrao Jaan, Aastha and Kamasutra, she was equally at home in genres like family movies, comedy, thrillers, drama and suspense.

The movie Ijazzat is a powerful watch that deals with feminism and patriarchy where she played an ingenious role of a middle class woman who fought the odds but never compromised on her values just for a man. Very similar to her role in the movie Khoon Bhari Maang where she portrayed a widow who loses her loving husband only to fall victim to a lecher who tries to murder her and steal her money. In the movie she was the mother to two little children and she was left to die. She refused to be a victim and ultimately emerged as a power woman who kills that lecher in the end of the movie. It also portrayed her as a stunt woman riding a horse with guns and whips in her hand to beat a debauch when need arises.

In the movie Khoobsurat she played the role of a naughty girl who with her loving nature won several hearts. In real life too Rekhaji is like that, gallant and a loving woman. On the other hand, she also acted in Kamasutra, a brilliant masterpiece of the legendary film maker Mira Nair, where Rekha played the role of Rasadevi who teaches women of the 16th Century the art of love making. But both Mira Nair and Rekha portrayed women as a masterpiece of almighty who can teach a man how to love a woman for her spiritual soul and not as a commodity. Sadly our patriarchal society considered this movie obscene and both Mira Nair and Rekha were dragged into controversies.

She has featured in several movies and in each she has given a strong message to the society. To name a few of such ingenious movies are: Ijazzat, Muqqaddar ka Sikandar, Umrao Jaan, Utsav, Silsila and Mr Natwarlal.

Time and again Rekhaji was blamed for being a home breaker. In a new book by Yaseer Usman on the Rekhaji’s early life and controversies, there was also another factor the author has earmarked, that is Rekhaji’s loneliness. In an article on the book in the Hindustan Times, the author wrote: “In typically sexist style, the film industry and the press repeatedly singled out Rekha and maligned her, never her partners, for her supposed relationships. After reports of affairs with Jeetendra, Dharmendra, Sunil Dutt and Amitabh Bachchan, among others, Rekha was projected as a woman who posed a ‘threat’ to the happiness of married couples in Bollywood. The press uninventively called her a ‘man eater’ and a ‘nymphomaniac’ […]. Even with no one seemingly on her side, Rekha went on to become a superstar and the highest paid actress of her time”.

She married a businessman Mukesh Agarwal who got attracted by her rare combination of beauty with brains. Mukesh was a victim of depression, utterly possessive, and made Rekha’s life miserable by constantly demanding her attention including embarrassing her by leaving his business back in Delhi and hanging around her during her shoots. When he committed suicide, the entire world pointed fingers to Rekha, accusing her as responsible. Anupam Kher made a statement on that suicide. “She’s become the national vamp. Professionally and personally, I think it’s curtains for her. I mean I don’t know how will I react to her if I come face to face with her”. In the same article, she was also accused by Mukesh’s brother Anil Gupta: “My brother loved Rekha truly. For him love was a do or die attempt. He could not tolerate what Rekha was doing to him. Now what does she want, does she want our money?”

When woman commits suicide, the questions asked often are: “Was she was a woman of questionable character? Was she a victim of some illness?” No, there we need to scrutinize a woman and question on her morality. But in Rekha’s case, society was quick to pass judgment and blame her for his suicide.

People give a curious look at Rekha when she wears a red bindi on her forehead, sindoor on her parted hair and a mangalsutra when she doesn’t have a man in her life. People assume that she is married to someone, or that she must be in a relationship. Well, Society, I too am a single woman and sometimes I too wear a red bindi, sindoor on my parted hair and also a mangalsutra when I feel like wearing them though I do not have a man in my life. I will wear anything I like, I will do whatever I like. No one has a right to judge or dictate what a woman wears.

But does anyone know how she deals with her pain all alone? She is a human being. The media doesn’t spare her; each time she is spotted with a man her personal life becomes a national affair. She is a talented woman, a combination of beauty and brains, and clearly people are jealous.

I wrote through eyes of Rekhaji who is my inspiration but I have a reason behind my story. As women, we are not do whatever we like, especially being sensuous or talking sex openly – I personally am unapologetic when I talk sex and will continue to do so. But a man can talk about or do whatever he wishes, but when we talk about sex openly we are labeled BAD.

But Rekha does not give a damn about these strictures on women. Despite all odds Rekhaji remains fearless and keeps doing her work. We women should also be doing that.

Pay no heed to rumours or juicy gossip.

There is no need to beat your trumpet to prove your worth to some callous characters – which can be of your own gender as well.

Keep doing your work and have faith on yourself.

Women are accountable to themselves and no one else. We need no certification from a man to validate ourselves. We have excelled in all segments, education, science, art, theatre, films and many more.

The Diva, the Woman

Rekha is a super talented woman, a beautiful woman with a heart of gold. People just see her as a sensuous woman to be desired, but there is much more behind it.

She dealt with all the blows life delivered to her ALONE. She had no family to support her; as a celebrity she is trolled. She chooses to keep a very low profile and it is said she hardly speaks on phone. But she is a complete woman who lives the way she loves, and we all should be doing the same. Follow our true calling and not pay a heed to those petty dramas which will be a forgotten history after a while.

If you want to make a dent in the universe, a lot of people are going to be unhappy with you, but that’s okay. Tight ropes are often meant to be walked alone. Like Rekha.

Header image is a composite of screenshot from Saawan Bhadon, Khoobsoorat, and from YouTube

The Quintessential Umrao Jaan; Only Rekha Could Have Really LIVED This Role!