Don’t Miss Out On Any of Our Best Reads, and Contests. Register Now!
Crime & LawPop CultureReadSocial Issues

By creating such a violent uproar about Padmaavat, the Karni Sena actually did Bhansali a favour, instead of protecting anyone's 'honour'! 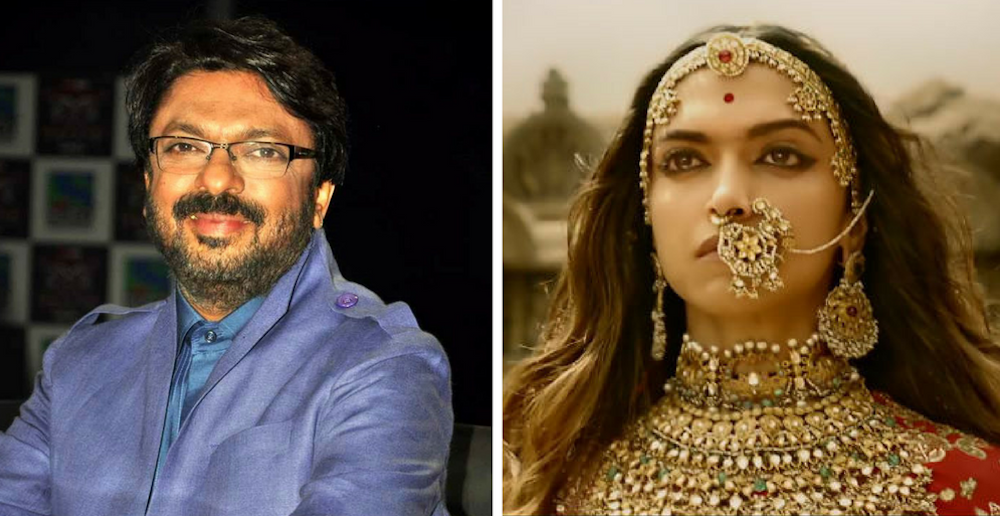 By creating such a violent uproar about Padmaavat, the Karni Sena actually did Bhansali a favour, instead of protecting anyone’s ‘honour’!

D Day finally arrived! Labyrinthine queues waited outside cinema halls, jostling their way in, for that moment when they could rest their eyeballs on the story of the beleaguered Padmavati, who must have assumed that once she went down the jauhar route, she would rest in peace forever.

Yet centuries later, at a moment when India is at its regressive best, goons have taken over, lambasting the movie which they know nothing about, releasing venomous rants about cutting off the nose of the hapless heroine because she has blotted the honour of her mythical namesake, and wreaking havoc across their territories. The women of the community are as vociferous as they protest, loud and clear, against the damage done to the honour, the culture, the maryada, the dignity of the Rajasthani queen who is revered by all. They have threatened to commit jauhar at Jauhar Bhavan if the movie is not banned? (Isn’t that tantamount to attempting suicide, which is against the law?)

The Supreme Court has made it clear that the movie will be screened. The Karni Sena has stepped up its aggression, beating up innocents, raising slogans and stones with impunity, and its latest atrocity has been to terrorize young children travelling in a school bus by throwing stones at them. Their language has been provocative, their actions even more so. It is as though they have taken it on themselves to uphold all that is dignified in the culture of Rajasthan without betraying an iota of dignity themselves.

My heart aches for all the wonderful Rajasthani friends we have made over the decades and whom we love dearly. Each of them has been an example of honour and chivalry, with principles of hospitality that are very difficult to beat. Their hearts are bigger than their homes, and believe me, their homes are magnificent. They are comfortable in their skins and in their attitudes, and most of them are shocked at the turn of events in their state, where the Karni Sena has suddenly decided to set the rules and wreak havoc.

This is what Hemangini Chauhan, a young woman fiercely proud of her heritage, had to say on the whole Padmaavat issue. Karni Sena, Let The Dead Padmavati Be, Instead Make It Better For The Living Women If You’re So Keen! 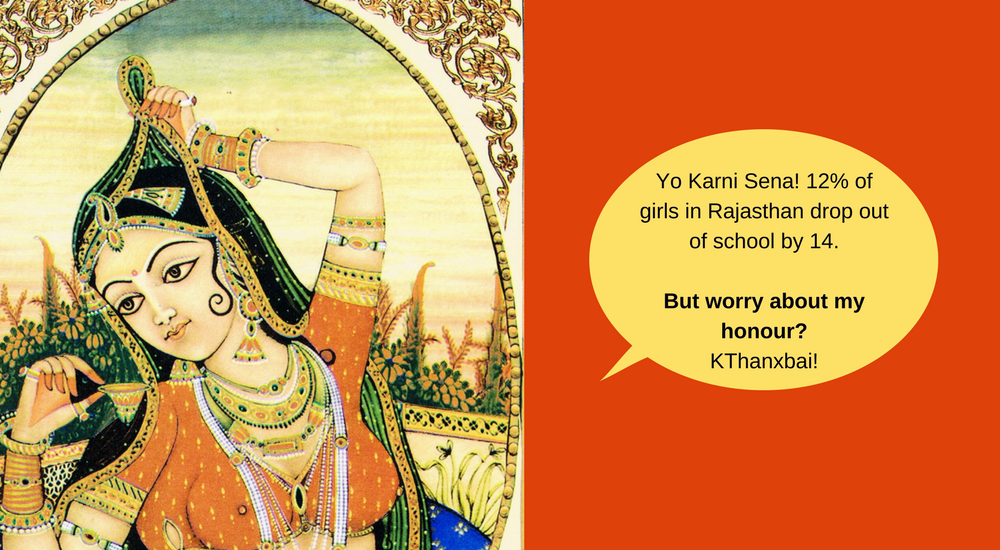 “It’s so sad and ironical that, our ancestors, the mighty Rajputs, were people who protected our country, brought us our pride, protected our women, children and fought for the country, NOT WITH IT. Yet these people today portray such cowardice in the name of those ancestors by burning down public spaces, vehicles and vandalising school buses. Such bravery shown against one’s own country is loathsome.

Instead of focusing on caste divisions and religious beliefs and how a movie can harm a mythical woman, our county should be focusing on the people that are dying, the women getting raped, the kids getting molested and getting iron rods and candles shoved up themselves leading to death. Or shouldn’t we think about the girls who get deadly and pain causing acids thrown on them each day.”

She did not stop there, but went on to offer solutions for the problem as well.

“And, you say it’s to show unity? Unity should be shown in a positive manner. If the same amount of people supporting this so-called brave attitude in the name of caste, donated just 1 rupee and got food, majority of the beggars of our country could be fed, if just one person educated the other, our illiteracy count would go down, and if the same amount of people employed just one person under him/her, the unemployment rate would go down too. If instead of provoking and negatively influencing Rajput women to commit suicide against the release of the film, if the same women were influenced to educate themselves and learn self defence, woman illiteracy and rape counts would massively reduce.

If the amount of outcry created against #padmaavat was created against female infanticide and favoured educating the girl child in each house and teach her, her well deserved rights , the future of a girl child would be saved! Don’t you think there’s so much more to focus upon rather than creating new non-profiting problems ?”

And this was just one, right-thinking brave girl putting down her thoughts.

Well before the movie came out, the Karni Sena had decided that it was a blot on Padmavati’s honour, only because they saw one hundredth of the tiny trailer which had Padmavati going around in circles, doing the Ghumar. In that split second, they had a split second view of her navel, which was quite enough to sully her honour completely. Bhansali actually kowtowed to them and covered that little snag with exorbitantly-priced special effects, but the damage was already done. The navel could not be undone, and so Padmavati was undone! Besides, Alauddin Khilji could not have the temerity to dream of the beauteous Padmavati; after all, they were no longer the modern day Ranveer and Deepika, but two historical characters at two ends of the spectrum, never fated to meet in harmony or amity.

Life comes with its own sets of ironies, it is said. After the first few shows, audiences came out with very divergent views. Some had stars in their eyes, quite bedazzled by the magnificent grandeur of a typical Bhansali movie. Others came out shaking their heads, vehemently denying that the movie had anything to rave about, from its lack-lustre performances and its one-dimensional Rajput characters, to the unbridled cruelty of Khilji. However, one thing they all did agree on was that there was nothing in the movie that sullied even an iota of Rajput pride. The battle was fought and lost, but Padmavati reigned supreme, her honour shining like a star.

If we turn time back to when Bhansali announced his Padmavati, now Padmaavat, and erase all those months of violent protests and wounded Karni pride, and pretend that all the unpleasantness never took place, probably the audiences would have watched the movie and forgotten about it. Probably the movie would have run for a couple of weeks and been forgotten, especially as new, path-breaking movies are being made by young directors who want to make a significant change in the mindsets of their viewers.

And yet, Bhansali will now laugh his way to the bank, along with his stars, as the crowds mill over in the theatres just to see what all the hue and cry is all about, even as the Karni Sena beats its breast over an affront that was not even there in the first place! Bhansali has not had to spend any money on the promotion of his magnum opus. His opponents did it magnificently for him.

Words have always played a vital role in my life. Short stories, poetry, humorous pieces or full-length novels... I love them all! Having been read more... 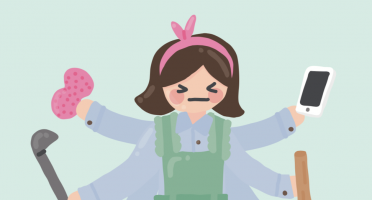 View All
Divorce Rights For Married Women In India - Legal Rights 101 With YourInstaLawyer
No More Guilt: Exploring The Ways In Which You Can Shed Mother's Guilt
Steps To Landing Your First Writing Job - Want To Be A Content Writer?
What Are The Essentials Of Being A Good Content Writer?
Women At VMware - Meet Ipsita, Inside Sales Representative At VMware India
Women of VMware - Meet Afifa Hasan, Enterprise Sales Account Manager for VMware India
Crime & LawReadSocial Issues

What a woman does when confronted by rape, cannot be easily judged. Our focus should be on creating a more supportive society instead. What a woman does when confronted by the likelihood of being raped, cannot be easily understood or judged. Our focus should be on creating a more supportive society that can heal wounds and nurture dreams.

Less than a month ago, The Quint published a story titled, ‘Can we stop glorifying Padmavati for choosing honour over life?’ The article succeeded in attracting the ire of most of its general audience and some right wing e-media portals for coming up with what they said was a twisted rationale for Jauhar. While the writer argued that Rani Padmavati need not be venerated for choosing honour over life because she was conditioned to believe that rape was a fate worse than death, online critics and trolls laughed at the writer’s understanding of human emotions and history.

AIB's scathingly critical video An Ode To Karni Sena expresses everything we felt as these barbaric 'defenders of culture' attacked a school bus with kids.

AIB’s scathingly critical video An Ode To Karni Sena expresses everything we felt as these barbaric ‘defenders of culture’ attacked a school bus full of children.

Since the latter half of 2017 and the whole of January 2018, Karni Sena had thrown so many tantrums around a movie about a fictional narrative that it was almost funny. Until these a-holes went ahead and attacked a school bus full of children, trying to get their demands fulfilled. It was an appalling act of violence which was heavily criticized around the country and the world. A conglomeration of cultural buffoons go ahead and attack a bus full of children in India! Incredible India, indeed! I cannot even express the amount of rage that I feel towards them.