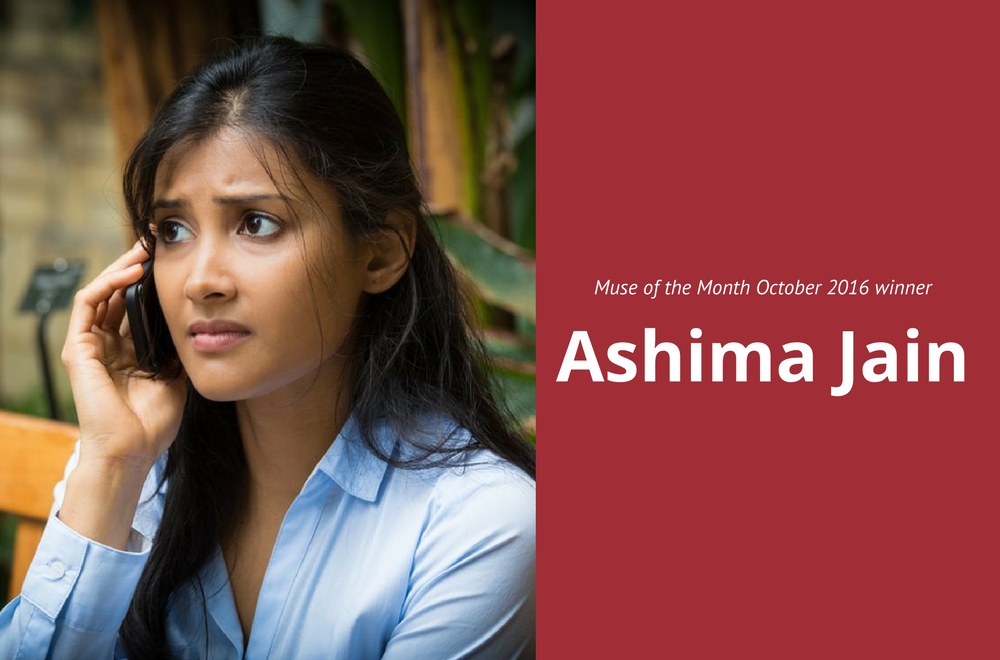 “She realised she had only needed the strength to take the first step. The rest would follow on its own, one step at a time.” The first step against domestic violence.

Here is the fourth winner of our October 2016 Muse of the Month contest, Ashima Jain.

The cue was: “If I had low self-esteem, how could I have done what I did tonight?” – Anuja Chauhan, Those Pricey Thakur Girls.

On the day of her wedding, Vrinda was a radiant, blushing bride. At twenty-six, she had been earning reasonably well when her parents convinced her to settle down. They had found the perfect match for her. He was an entrepreneur with a successful catering business. The family was known and respected in the community.

Two meetings later, one of which was chaperoned by Vrinda’s cousin, the alliance had been fixed.

After the wedding festivities were over, Mudit didn’t enter his room until five in the morning. Vrinda, who had stayed up all night waiting for him, had only just fallen asleep. He rudely shook her awake and forced himself on her, before rolling over to the other side and snoring, sprawled across the bed.

She blamed his friends for the drinks they had poured down his throat, even as the tears rolled down her cheeks. Not even in her wildest dreams had she ever imagined such a horrible beginning to her new life.

On the morning after the wedding, she walked in on her mother-in-law rummaging through her suitcases. Vrinda saw her pull out all her valuables and pile them on a folded double-bedsheet spread out on the floor. Upon seeing Vrinda, she mumbled something about wanting to ensure their safety. “I am only moving them into the wall safe in my room. They will be secure there. You can always ask me if you need something”, she offered.

Vrinda didn’t think she should have to ask for what rightfully belonged to her. “I will deposit it all in my bank locker”, she said. But her mother-in-law waved her off, “Why pay for a locker unnecessarily when we have one at home?” and carried the bundle away.

When Vrinda mentioned the incident to her mother, she was told to be patient. “Everything is new. It will all be fine once you are settled in.”

On the third day, Mudit asked her for money. “I am falling short of a couple of lakhs and I need to pay off a few vendors.”

“I barely have enough myself. Everything was spent on the wedding”, she stated.

“Then break an FD. That should more or less cover it.”

“Would you rather your husband lose face with the vendors?”

Vrinda wordlessly cut a cheque for one point five lakh rupees and handed it over to Mudit, effectively emptying her savings account.

This time she complained to her father. “My money is not his to squander. These are my hard earned savings.”

He calmed her down. “Don’t forget you are married now. Everything you own, belongs to your husband as well. That is the way of life.” Telling her to be accommodating, he brushed off his daughter’s concerns as naivety.

One week after the wedding, Vrinda resumed work at the office. After a long and tiresome day of catching up with the backlog, she reached home well past dinner time.

Mudit had sent her multiple messages during the evening enquiring about her whereabouts. She had repeatedly informed him that she was going to be late at work.

“Have you seen the time? Do you expect everyone to wait for you to be home before they can have dinner?”, Mudit accosted her in their bedroom.

“I didn’t ask anyone to wait. I told you to carry on without me”, Vrinda replied in her calmest tone.

“And who was supposed to cook dinner in your absence? Your fairy godmother?”

“We have a full-time cook, Mudit.”

“Whom you need to supervise. You can pretend to be a career woman all you want. At the end of the day, you, as the daughter-in-law, are responsible for the smooth and efficient running of this household. Make sure you get your priorities right early on.”

The matter ended there simply because Vrinda decided to keep quiet.

On their one-month anniversary, Vrinda asked Mudit for the car so she could drive to work instead of using the office cab. It would allow her some leeway in managing her time, especially in the mornings.

He spoke from behind the morning newspaper. “How do you expect me to commute then? By foot?”

“Why would you do that?” Vrinda laughed in amusement. “You have a perfectly good sedan that is just sitting in the driveway. You can use that while I drive my car.”

“The sedan is old and troublesome. I have kept it for my parents so they can use it to get around.”

“Then how about you buy another car for yourself?”

“Do you think money grows on trees? Who will pay for a new car? And why do we need one when we have this? Besides, another car means double the petrol expense. Your office cab, on the other hand, is absolutely free. Think of the money we save.”

That had been the end of the car discussion.

It wasn’t that Vrinda didn’t see how she was being pushed around as per the whims of her husband and his family. She most definitely didn’t agree with any of it and felt compelled to revolt. However, with no support from her parents, she pretended to ignore the signs of impending doom and instead, convinced herself that these were all teething problems to a developing relationship. Having been financially independent since she graduated college, she was used to doing things her way. Maybe she needed to be more accommodating in her outlook as everyone had warned her to be.

A few weeks later, Vrinda sat down for a late lunch after a particularly long Sunday which had been spent cleaning. Her mother-in-law had deemed it fit to give the domestic help the weekend off, while expecting Vrinda to dust every nook and cranny in preparation for Diwali.

Vrinda had barely begun to eat when Mudit returned from a catering event, furious. He swiped a hand across the table and sent her plate flying across the room. Vrinda jumped out of her chair.

“How dare you spy on me? Did you think I wouldn’t find out?”

“I’m surprised it took you this long.” Vrinda stood with her back straight and head held high.

“You bitch. Who do you think you are? I can do as I want, when I want, and with whomever I want. You mind your own business.”

“That is exactly what I’m doing. If my husband is sleeping with another woman while he treats me like rotten garbage, it is my business.”

Mudit raised his hand to physically assault her but Vrinda stopped him.

“You lift that hand again and I call the police. If they get even a whiff of what’s really happening in this house, you and your entire family are going to rot in jail till kingdom comes.”

The mere mention of the police had Mudit’s parents shivering in their shoes. “No police. Please, no police”, begged his mother.

“Shut up Ma. Let me handle it”, Mudit snapped at her.

Vrinda continued, with a new-found confidence. “I am going to collect my things and leave. You make a move to stop me or hurt me, I press this speed dial to 100”. She turned the phone towards him to show she wasn’t bluffing.

Mudit swallowed whatever he was about to say and watched as Vrinda hurried into their room.

She had been mentally preparing herself for days and had discreetly packed away most of her belongings. She had known this day was coming. She just hadn’t known when. Today the seams of her patience had come undone.

Mudit followed behind her and watched as she quickly shoved in the rest of her things and strode out.

Back in the dining room, she held out a hand in front of her mother-in-law. “The keys. You didn’t think I was going to leave with all my jewellery locked in your secure wall safe, did you?”

Her mother-in-law hobbled into her room to unlock the safe and stepped aside. Vrinda placed her valuables on the bed, stripped the bedsheet off the mattress and tied everything in a makeshift bundle, which she then stuffed into an empty suitcase.

Before zipping it, she looked at the old lady. “The bangles, earrings, and pendant too.”

Her mother-in-law took them off her person and placed them in Vrinda’s hand.

Outside, her father-in-law, who had chosen to remain silent all this time, finally spoke. “Everyone makes mistakes. There is no need to get so dramatic. Mudit is sorry for his behaviour. Let’s sit and talk this over. Why do you need to get the police involved?”

Without waiting for his response, Vrinda dragged her bags out to the car.

“Hey, that’s my car. Where do you think you’re going with it?”, Mudit demanded.

“No Mudit. This is my car. The one I bought with my hard earned money and am still paying EMIs on, while you benefit from its use. That”, she smiled as she pointed at the dusty sedan sitting in the driveway, “is your car. I am sure she’ll be happy to have you back, as will your girlfriend.”

Mudit stepped forward. “Don’t think I am going to let you get away with this. You have dared to threaten me and my parents. I will make you pay for it. Then, when you have nowhere else to go and decide to crawl back to me, with your self-esteem buried six feet under, I am going to make you pay some more.”

“Let’s not get ahead of ourselves, Mudit. Think about it. If I had low self-esteem, how could I have done what I did tonight?” With that, Vrinda put her car in gear, exhaled a long deep breath and drove away.

She realised she had only needed the strength to take the first step. The rest would follow on its own, one step at a time.

Ashima Jain wins a Rs 250 Flipkart voucher, as well as a chance to be picked one among the 10 top winners at the end of 2016. Congratulations!

What Does It Take For A Woman To Fight Domestic Violence?

“I Will Stand By My Sister No Matter What!”