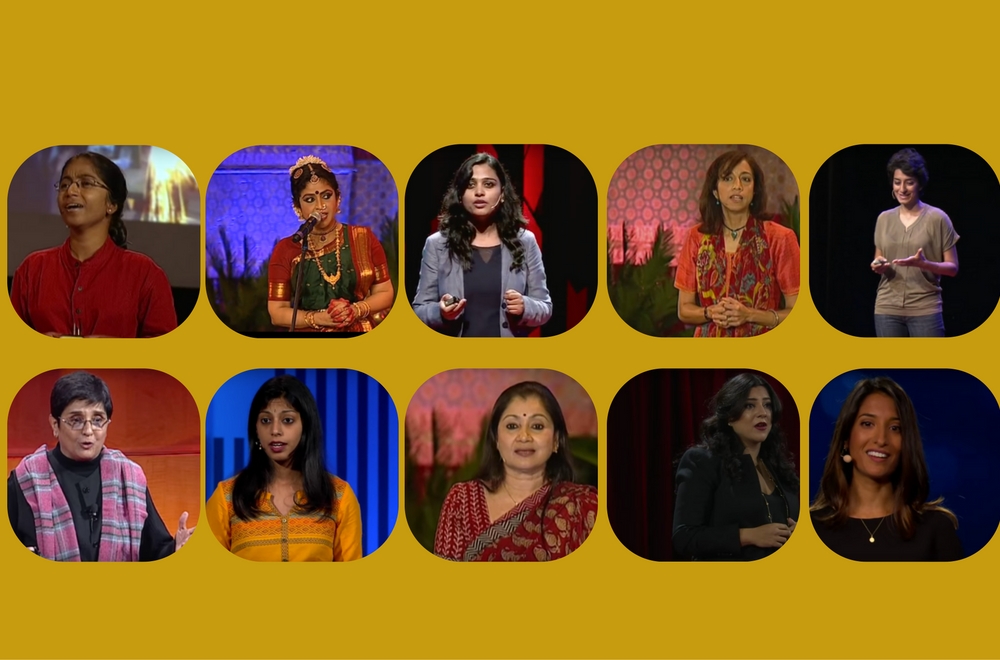 TED has been known to curate talks by speakers from around the world – speakers who are passionate and forthright achievers in their own domain. The TED Women 2016 conference is going on in San Francisco currently, bringing the best of women globally, on to one single platform.

In this light, we have curated a list of the most interesting, compelling and persuasive TED talks by Indian women over the last decade. These talks cover an expansive range of topics –  from effective policing to anti-human trafficking, from fighting cancer to driving education.

Go on, watch these phenomenal women take you through their journeys, and let us know your thoughts in the comments below.

I have had the privilege of meeting Sunitha Krishnan, a phenomenal woman who has dedicated her life to the fight against sex slavery. She is inspirational, forthright, fearless and powerful. Her organization, Prajwala, has been at the forefront of the anti-human trafficking efforts in our country.

In this powerful TED talk, which never fails to give me the goosebumps, Krishnan speaks about the stigma and isolation associated with victimizing a victim, through her own experiences of being gang raped by eight men when she was 15.

She talks about the horrific experiences of women and children who have been victims to modern day slavery – the worst form of human rights violation. She goes on to relate the stories of nameless and voiceless women who have been raped, mutilated and defiled, even killed.

Her efforts have led to the rescuing of 3200 children and women, who would have otherwise rotted in proverbial hell through their lives. Prajwala has understood the innate potential of women and introduced them to alternate dignified means of livelihoods such as masonry, welding, driving, carpentry and fine arts.

If there is only one video you can watch now, it has to be this.

Padmashri Awardee, Ananda Shankar Jayant’s TED talk is counted amongst one of the 12 Incredible TED Talks on Cancer.

A super-achiever in life, Ananda donned many hats at one – dancer, choreographer, scholar and bureaucrat – none of which prepared her for the horrors of dealing with Breast Cancer. She speaks about the overwhelming enormity and the complete loss of control associated with cancer and her battle with chemos and radiations which sucked all semblance of life out of her.

Yet she declared to the world at large that she would ride it out and used her passion for dance to fight the deadly onslaught of cancer. Her laser sharp focus enabled her to dance a few weeks after surgery. In her own words, her story is the “power of bringing ourselves to the attention of something that so animates you, so moves you, that something even like cancer becomes insignificant.”

Aditi Gupta – Shattering Menstruation Myths, One Conversation at a Time

Aditi is the co-founder of Menstrupedia, which aims at delivering informative and entertaining content to definitively shatter the myths surrounding menstruation for ages. They describe themselves as “a friendly guide to periods which helps girls and women to stay healthy and active during their periods.”

In this very compelling talk, Aditi speaks about her experiences in her hometown Garhwa in Jharkhand, where buying sanitary napkins was considered shameful. She used rags and stored them in dark, dirty places just so that “nobody could find out that she was menstruating.”

In her journey towards breaking down the myths and taboos related to menstruation, Menstrupedia aspires to educate girls, teachers and parents about menstrual hygiene and periods and encourages them to initiate conversations around it. Check out some of the material they use, here.

In this fascinating talk, Kavita Ramdas brings to us stories from around the world, where women are saving us by redefining and reimagining a future that defies and blurs accepted polarities – the ones between modernity and tradition, between oppression and opportunity.

Raised as a feminist, Kavita states that she has always questioned the dichotomy of women being viciously oppressed by cultural practices, and being cultural preservers in most societies, in the same breath.

She relates stories of her travels around the world and conversations with women from countries as diverse as Liberia, Croatia and Afghanistan – which have led her to believe that women around the world are operating at the cross section of liberation and tradition.

In a space where the personal is political, women have not chosen to do away with tradition. In fact, “these traditions are being woven into a resilient fabric which will sustain communities eventually.”

Watch the genius of Aparna Rao, a part of the Bangalore based artist duo, Pors & Rao, as she shares some of her fascinating art works within the realms of intuition and mystery.

A graduate of the National Institute of Design, Rao is a TED Senior Fellow and works with electromechanical systems and interactive installations, that cleverly and humorously allow humans to experience familiar objects and interactions.

I especially loved her work on Decoy, and the perception of tension and duality it creates “as if the two sides of the brain were clashing against each other.”

Kiran Bedi – Breaking Barriers, One Movement at a Time

We have all heard of Kiran Bedi – The first and the highest ranking female officer in the National Police Force in India. How many of us know her story, though?

Watch her speak at the TED Women 2010 conference, as she relates her inspiration behind joining the police, the challenges she faced as a female police officer, the numerous transfers she was made subject to, her efforts in correctional prison reforms and in containing drug abuse; and the impact she created as a police officer and as an activist.

She was tough – a woman with an indefatigable stamina. For her, policing stood for the power to correct, to prevent and to detect. Her greatest contribution was in the field of prison reforms, in an attempt to check recidivism – where she introduced education, meditation and livelihoods initiatives for prisoners, steering them clear of their past and enabling them to move towards dignity.

Meera Vijayann – Fighting Sexual Violence, One Story after Another

Meet Meera Vijayann, a persuasive citizen journalist, who uses digital media in creative ways to empower, inform and educate young people about the issue of gender based violence.

A winner of the CNN IBN Citizen Journalist Award in 2013 for her coverage of the grotesque Delhi rape case, Vijayann, in this TED talk, speaks poignantly about her experiences of being a victim to graphic sexual innuendos and gender based violence.

She talks about the power of having open conversations about sexual violence on social media, about her vulnerabilities as a female citizen journalist, and the empowering outcomes of not only giving women access to materials or tools, but also giving women “authority, which is the key to independent will, no matter who we are or where we come from.”

An erstwhile corporate honcho, Shukla Bose lives and breathes as an educationist and an activist for the cause of education. She is the Founder and CEO of Parikrma Humanity Foundation, an extra-ordinary nonprofit that runs four schools for the economically disadvantaged children of Bangalore’s slums.

In this moving talk, Bose takes us through her journey of setting up Parikrma, and the uniqueness of the curriculum and the learning environment offered by Parikrama’s Schools of Hope to children, who would have never seen the insides of a classroom otherwise.

She takes us through numerous stories of the kids enrolled in the schools, their learning trajectories and their heightened access to quality teachers and opportunities. She wraps up by saying that she started with an arrogance of transforming the world. Over the years, she has been transformed by the love, compassion, imagination and creativity of the children.

Reshma Saujani, Founder – Girls Who Code, has taken upon herself the audacious goal of enrolling one million women in her tech initiative by 2020.

She is spunky and does not mince her words. Listen to her, here, as she enumerates her gutsy choices in life.  She talks about her passion for public service which pushed her to move away from a career to a finance and run for the House of Representatives in 2010.

Subsequently, she didn’t win the elections, and did not let herself be cowed down by it. In fact, she realized that for the first time, she was being brave and did not worry about being “imperfect” – a burden which is thrust upon most women in society.

She eloquently cites “bravery deficit” as the reason why women are under-represented in STEM, in C-Suites, in Boardrooms, in Congress, and pretty much everywhere else. She goes on to break the social conditioning girls have been subjected to, by teaching them to code, to be brave, to take greater risks and to be empowered.

Shivani Siroya has been known for her ground breaking work in delivering real-time affordable credit to the unbanked and underbanked in emerging markets through her organization InVenture(now Tala).

She gives an interesting discourse about building trust and opening up financial access for the 2.5 billion people in the world who do not have a credit score, and hence cannot access financial products that can improve their lives.

Her solution to this complex issue involves creating credit scores for the marginalized through a mobile app, which captures data related to creditworthiness on people’s smartphones, and thereby vets their abilities to repay loans.

I have been in love with the written word for the longest time now. I