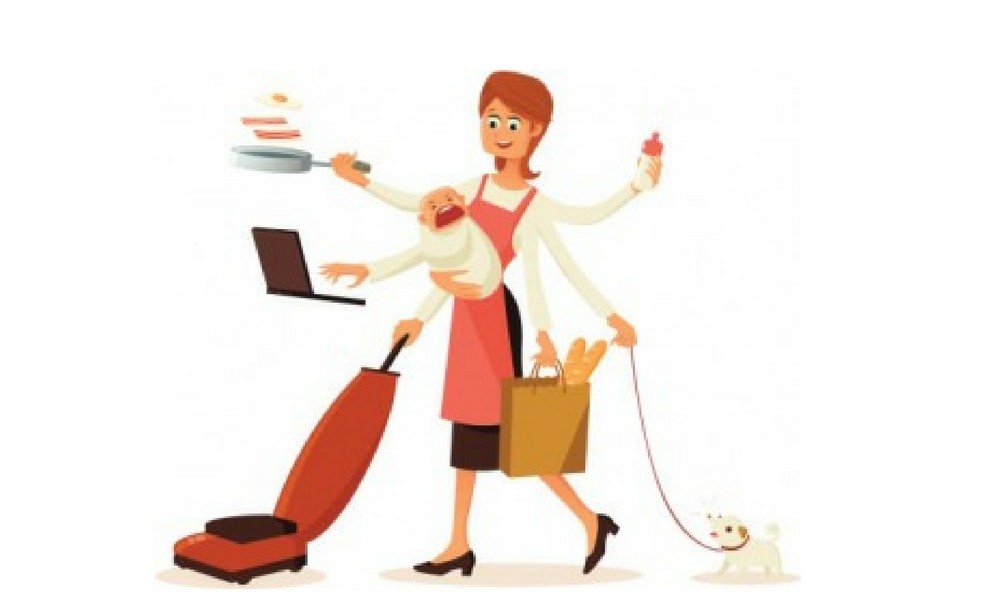 A woman is expected to be a multitasking superwoman – what happens when she introspects? Can she come to terms with it? An insightful short story.

One rainy morning when Rama woke up, she saw the time was past 5:30 a.m. “Too late!” she muttered and rushed to the toilet. She had just thirty minutes to get her daughter’s lunch box packed, she would then wake her up and get her ready for school. The bus came at 7:00 but her daughter would easily take an hour to get ready, or 45 minutes in the least!

It was still dark outside. She could hear the patter of falling rain from the terrace. Louder hollowed patter coming from the corrugated sheet laid over the ducts of her apartment, muted drops from the terrace floor and the gazebo roof. She often got morose on rainy days with a strange sense of sadness jabbing her heart. She did not have time to meditate over any of that now, she quickly thought up two items to be packed in her daughter’s breakfast and lunch box.

She set the water to boil in the electric kettle, and put some rice to cook in a pan for her husband’s lunch to be packed post haste, after her daughter left for school. She had completely forgotten to drink the hot water while she packed her daughters lunch and breakfast and readied the milk for her. Only at six did she realise that she had to have her medicine, which she quickly popped with the warm water.

“Wake up baby,” Rama cajoled her seven year old. It took her ten minutes to bring her daughter out of slumber. Rama liked to keep this time stress free for her daughter so she lets her have that time… Finally it was all done. Daughter dressed and ready, standing at the bus stop with Rama, waiting for the bus at 7.

The bus came promptly on time and Rama rushed home to pack the next set of boxes and to prepare breakfast for her husband. She swiftly completed this task too. By 7:30 her husband had left for work.

She was feeling tired now, she did not want to go for her walk anymore. She rested for a few minutes and soon was getting ready herself. Rama had to leave for work at 8:30 and she did not have much time, her maid was here now, she could let her handle the kitchen and focus on getting ready. She was in her business attire having, her breakfast soon, and then she left for work.

Rama was responsible for managing an important profile in a multinational. As she drove to work, her phone started ringing. And Rama transformed. She was now all business and logic. Who would tell that she had been slogging since 5:30 a.m. in the morning? She was full of energy, as if this was the only thing she ever did. Get on calls and sort out issues of the company’s internal and external customers.

Somewhat stuck by the self-realisation of this transformation, Rama mused… She had it all, a great family, a great husband, a beautiful, adorable bundle of joy, her daughter and a job of her dream, but she was always on the edge! Most of the time she felt like a juggler, juggling between… the home and family of her dream and the job of her dream. It did not seem to gel, the home and the work… She knew she had two identities… They call it split personality she reminded herself. I am not split personality. I am just split between choices. I wish I could have some simplicity in managing the two worlds. As rain drops frosted her windscreen Rama realised how her heart was caving in, that sputter of rain always brought that edginess in her! Maybe a cup of coffee would make her feel better.

Soon she was at the office, the moment she reached her seat, her manager met her and she could sense that all was not well. She instinctively knew it was the project she was working on. She just wanted it out of her way and that is what she did. It was almost as good as her best. Her manager offered, “But you are a go-getter Rama, you don’t get content, you are always bring more on the table, perfection, clarity, insight, whatever it is! Don’t lose that skill of yours, he advised.”

Finally at her much needed coffee break Rama met up with her friend, ‘her emotional sand bag at work’. She narrated the irony of her life. “I am not complaining, I am not being impractical or unreasonable,” she said. “It seems no one ever asks me if I am tired or need some assistance. Why am I taken so for granted at home, when people at home know how big a responsibility I handle at work? Why is no one ready to take up small daily responsibilities? For me, house – no home comes first, and then comes work… Work comes first for me when at work. How can I handle two firsts? I don’t seem to relax for a minute. I will complete my day here and will be off to work, to put dinner on the table on time. It is not as if someone will complain if I did not, but no one will help enough, unless I am sick that is! Why is it assumed that home is my responsibility alone and my work is only my problem!”

“But Rama you know what a gorgeous life you have! You have a fantastic home, family everything, just the way someone would dream…” said her friend. Her voice trailed off, knowing where she was headed. The water ahead was murky… She knew this is how far she could get at rationalising, idle words spooned into her mouth by the people around her. Is that all? Good home, good family and no real respect? Her friend wondered. “We are the pillar of support for our families,” she muttered finally!

It was still drizzling outside, she could hear the gentle tap, tap, tap of water falling on the roof of the office cafeteria, frosting on the window panes around her, a million drops of water bulging and trailing down from those transparent glass sheets.

“Yes,” said Rama, “pillar-less ourselves, we support the society, hope-less ourselves, we provide hope to everyone, hapless ourselves we spread happiness in the world. Am I a corpse in rigor mortis, mistaken for a pillar of support? Don’t I deserve to be helped, empathised with, cared for and indulged?” Rama knew she had spoken too much, it was just her heart and mind whining under stress. She was happy to do all that she did…

She thought of the little being who brought a smile on her face every moment. How she melts at the very sight of her daughter, that cherubic smile, those innocent idle talks. She thought of the love that brought her and her husband together. The little things they do as a family, those holidays that they regale themselves with. She wanted it all and would go an extra mile to nurture her home. Could she ask for more? This is the life dunked and nurtured in love.

What she said was not so much for herself, as it was from the realisation that the entire feminine mass around her had been fed the same dialogues of contentedness as she had been. They were the cut copy paste of each other. Children of discontent, contempt… discouraged, downtrodden, dominated, disheartened. Yet they had the heart to build happiness around them in every heart they touched!

How should she ask for that equity, which the entire society, the entire civilisation, the entire human history conspired against her, not to give her? No, Rama was not unhappy now, she was glad she had sapped out her discontent… she was now quite content once again.

It was a rainy day, it was her nature… Rama gathered melancholy in her heart, at the sound of sputtering raindrops, mistaking it for her own tears of sadness.

I am a Chartered Accountant and a Mother of a 7 year old. Writing is

“You Have Messed Enough With Me, Not Anymore”: A Volcano Erupts