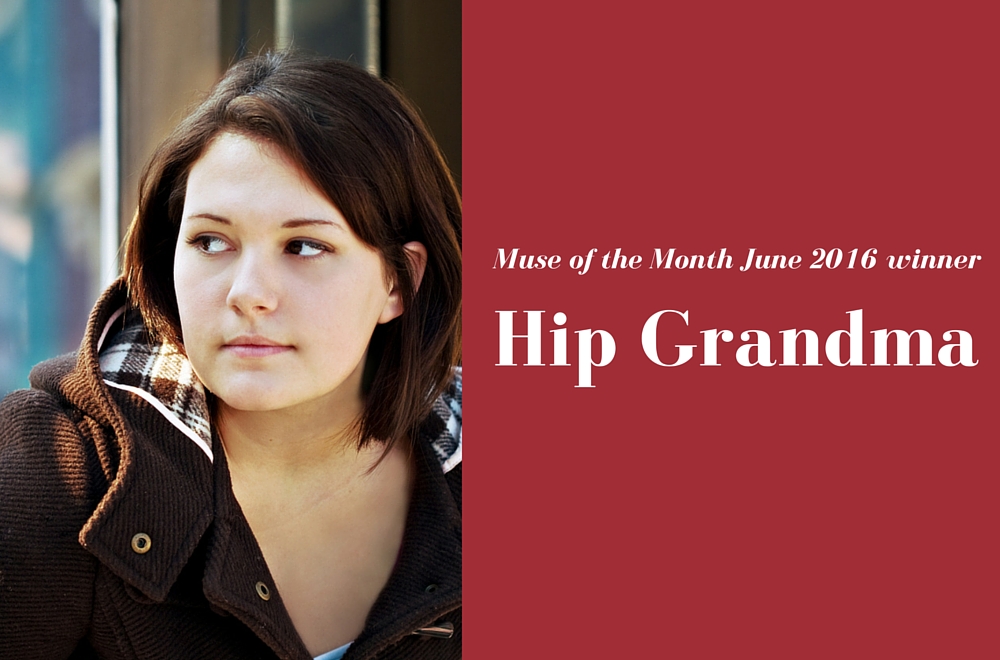 A story about being different. “If your parents had stopped worrying about what the world would think of you, life would have been that much easier for you to live.”

Here is the fifth winner of our June 2016 Muse of the Month contest, Hip Grandma.

Rashmi looked at her daughter Divya – a beautiful nineteen year old girl ready to leave for college. In a few years from now she’d be taking her place in society – ready to face the ‘ups and downs’ of life. The term brought a sad smile to her face. Yes, you heard me right. A sad smile it was. Hadn’t she seen enough of them in her life? Her mind raced back to her own college days that held some very unpleasant memories for her.

She remembered the posters that had been seen all over the place in the hostel on an unsuspecting Sunday morning. It was posted in the corridor that led to the bathroom, in the notice board in the common room, at the gate leading to the warden’s quarters, in the ground floor of the girl’s hostel and in the dining hall………………………

‘Calicut beauty” was a reference to her! ‘Bombay pigtails’ was indicative of her junior Vinita!

“Who has done this”? Bellowed the warden. “Shame on you girls”. She immediately asked the gatekeeper to pull down all the posters. Such things did not happen in her hostel. Mischief mongers! Creating trouble!

The Principal however came to hear of the incident and summoned Rashmi to her office. Her parents were sent for. The college counsellor was also present.

Her parents refused to glance in her direction. Her mother was crying. She wondered if Vinita’s parents would be summoned too. Bombay was at a two day’s train trip from Coimbatore. May be they would take longer to come. She wondered if she would be expelled from college. It was only a month before she’d answer her final semester and prayed for divine intervention. She could say nothing in her defense.

What the posters claimed was true. She was attracted to Vinita. In fact the attraction was mutual. Her roommates gushed over a famous film actor and collected posters depicting him in different poses. Some girls in her hostel had boyfriends and could spend hours staring at the ceiling fantasizing about them. She had never been attracted to boys and could not share their interest. She had however imagined that no one had noticed the mutual attraction they felt for each other. She was wrong!

They would hang out together after dinner pretending to prepare for their exams but would just hold hands and whisper how much they would miss one another when exams got over and they parted ways. They maintained diaries which they surreptitiously exchanged at night. Each claimed to have immense love for the other. There were detailed description of how beautiful the other looked and if the world would approve of their feelings.

Rashmi had looked for her diary but it had mysteriously vanished. So there had been someone watching her! The diary, she noticed to her horror, was in the counsellor’s hands.

“It is her hormones working overtime”, the counsellor was telling her parents. “Her sexual desires need an outlet. This is not uncommon in girls’ hostels. Get her married soon”.

Homosexuality was unheard of when Rashmi was growing up. She, like her parents, believed the counsellor. She was a psychologist and she would know. She prayed that this would be a passing phase in her life. She could not bear to think of the world pointing fingers at her family.

She was allowed to answer her exams but had to leave the hostel. She was a bad influence on others. She was given time enough to gather her things but had to leave without ever knowing what happened to Vinita. Her parents rented a house near the college to be with her, while frantically hunting for a suitable match before her sexual tendencies became the talk of the town. She pleaded for time to forget Vinita but they would have none of it. She wanted to work for a while if not in a new place at least in her home town Calicut.

“No way” screamed her mother. “We are getting you married. That’s it. You didn’t think twice before putting us to shame. Now the entire clan wants to know why you were thrown out of your hostel. We have managed to hush them up citing health reasons.”

“Thank God the wretch lives in far off Bombay,” her father heaved a sigh of relief. “These city girls have loose morals. Our daughter was saved in time. Whoever has heard of such things in our family, eh?”

It pained her to hear of Vinita being referred to as a ‘wretch’. She cried herself to sleep each night wondering if Vinita was also thinking of her. She knew her address but with both sets of parents censoring her letters she could not muster courage to write to her.

What followed seemed to be a bad dream. She agreed to marry Vinod just because his name had been shortened to Vinu – a name she’d call Vinita by in their private moments. She had hoped that with time she’d get over her unhappy past and adjust to life with Vinod.

But did she? Trapped in her desire for a female partner she could not do justice to her marriage. She could not bear to share a room with him, let alone her bed. She felt sorry for him. She hoped he would divorce her. But Vinod proved to be an understanding husband – willing to give her time. She finally told him the truth about her sexual preference adding that she had married him hoping that whatever she had experienced in the hostel was due to hormones and once married she’d be fine.

He initially found the whole thing ridiculous. A woman was not supposed to have a say in these matters.

“I need to handle you like a man,” he had laughed and practically forced himself on her. To be fair to her, she also tried. The sexual encounters that they engaged in were disastrous to say the least and she felt exploited and miserable afterwards. She nevertheless managed to get pregnant with Divya.

Both of them were relieved. Neighbors and relatives would now be hushed. After Divya’s birth she pleaded with him to leave her alone. She asked him to divorce her. He needed a better life partner. But he would not. What would the world say? How would his parents take it? However, he did not disturb her further. He went on ‘official tours’ for weeks together. She did not question his whereabouts. It did not concern her as long as they appeared to be a happy family to the world. Divya deserved better but this was the best she could give her.

“What’s this Divya”? She sensed a repeat of her misery in Divya’s life too.

“Mamma, please listen to me. Enough of the sham that you and daddy are projecting to the world. You think I don’t understand? You are leading a trapped life for whatever reason and that is suffocating you. Your life is not normal. Don’t get me wrong. I am an asexual with very little inclination towards sex. I have spoken to my school counsellor about it and she has advised me to come out with it. She says that there is nothing to be ashamed of in being asexual. If your parents had stopped worrying about what the world would think of you, life would have been that much easier for you to live. And daddy’s fault in the whole thing was to suffer in silence for the sake of the opinion of others. I love you both but I truly don’t wish to live your life. Please don’t get me wrong. I now have an option and I am going to exercise it without worrying about what the world would think of me.”

“Mamma” interrupted Divya without allowing her mother to continue. “This is confidential information that is for records. But at least the world is recognizing the status of people with a different sexual orientation and allowing us to acknowledge it. The opinion of ‘others’ may not change overnight but will this not be a first step towards it? Will it not help those who lack confidence to follow our example? You have been at the receiving end and ought to understand me”.

“And,” Divya paused to smile mischievously “I have already spoken to daddy and he’s okay with it. He wants me to be happy. That’s what matters to him. My cute mamma, I love you both sooooo much! You made me what I am”.

Rashmi was left wondering how and when her little girl had grown up to be a confident young lady. Times had indeed changed for the better! She would help her to lead life without worrying about the opinion of others.

God bless you my child! At least you know your mind.

Hip Grandma wins a Rs 250 Flipkart voucher, as well as a chance to be picked one among the 10 top winners at the end of 2016. Congratulations!

Image source: portrait of a young woman by Shutterstock.

When You’re Married, You’re Expected To Love Your Partner, But Your Happiness Rarely Matters!