Nandini Krishnan’s Hitched is an up-close and personal look at arranged marriages in the lives of today’s urban, educated, and progressive Indian women. 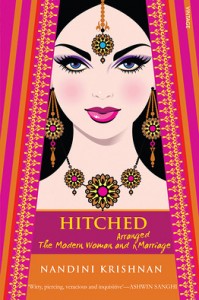 Nandini Krishnan’s Hitched is an up-close and personal look at arranged marriages in the lives of today’s urban, educated, and progressive Indian women.

While reading Nandini Krishnan’s Hitched, I was reminded of the song ‘Matchmaker, Matchmaker’ from Fiddler On The Roof. While imploring the matchmaker for a perfect match, the three girls know that they, their father, and mother, would consider different things as desirable. While longing for a future family of their own, they are scared of picking the wrong person. Most Indian women, even today, modern or not, still are.

Scarcely does a woman get into her twenties, and everybody, right from her immediate family to the neighbour’s best friend’s second cousin’s wife’s aunt gets interested in her matrimonial plans. No place is sacrosanct. She, or her parents, can be accosted by a well-wisher (?) anywhere – near the home, at work, in markets, on public transport, online – with details of prospective ‘boys’ thrust upon them. Add to that the many matrimonial sites with the requirements for a ‘fair, beautiful, homely/tall, slim, attractive, working girl’ that get posted every day.

Nandini Krishnan speaks to more than a dozen Indian women who went the arranged marriage way, and have shared their stories here.

There are those who went the arranged marriage way because they weighed all their options and truly believed that it was the right way to go, while some are in it because there wasn’t any other way for them – they did not have the opportunity or the inclination to look for someone on their own, or were not given any other option.

There are those who went into it knowing what to expect, and those who were taken unawares by the gap between their expectations and their reality.

Some had married young, finished with the raising of their babies, and had found themselves anew when older, yet still young enough to take up the challenges of a new workplace, while there are others who regret an early marriage that had crippled their growth as a person.

There are those who found wonderful friendships among their in-laws, and others whose in-laws are the major source of most problems.

We even have a couple of men who speak from a man’s point of view, confirming that the more things change, the more they remain the same. Although they do concede a few points to modernity, they confirm the perception that most Indian men are, more often than not, unwilling to let go of the position of privilege their gender gives them in Indian society.

The author has also dealt with related topics like the compromises required in an arranged set-up, the little things that our parents don’t tell us, the whole thing about intimacies with an almost stranger, the meshing of two very different personalities often with disastrous results, horoscopes, dowry, the actual wedding, living with in-laws, picking of battles, the question of children, and much more.

Some of these women’s stories spoke to me – as a reader, and as a modern Indian woman who has had an arranged marriage, I could identify with them. I found myself nodding my head at many places, quite agreeing with what they had to say. Just like in everything else, whether they are in a good arranged marriage or not, these Indian women have learnt that they have to carve out their own place under the sky. As Aarthi Varanasi, a mother to two teenagers, and an RJ at 38, says, “Women, even if they marry young, should not be limited by husband, family and children. You need to think beyond. The minute you draw boundaries for yourself, the minute you’re satisfied with your life, you’re not going to grow.”

Nandini Krishnan has done an excellent job of compiling the stories of these brave contributors, in a very engaging format. I say brave, because it is no mean feat being able to share intimate details of something as personal as the intricacies of one’s marriage with a whole lot of strangers. It was almost voyeuristic reading these stories, though there is nothing graphic at any place.

While there is much here that a reader would find positive, even joyous, the most insightful and sad comment on arranged marriages today, and the process one has to go through for it, comes from Devyani Khanna who has still not found someone she would want to get married to: “What one really wants from a partner is acceptance of who one is, and accommodation of who one may become… the most heart-breaking aspect of an arranged marriage is the pretence you’re forced to put on. You never get to know the real person until you’re married. You don’t get to know the person at all unless the charade impresses you.”

If you’re planning to purchase Nandini Krishnan’s Hitched do consider buying it through this Women’s Web affiliate link at Flipkart. We get a small share of the proceeds – every little bit will help us continue bringing you the content you like!

Readers outside India can purchase Hitched through our affiliate link at Amazon.