Today, we celebrate National Girl Child Day, with 7 girls, who proved that girls can be anything they wish to be, no matter what. 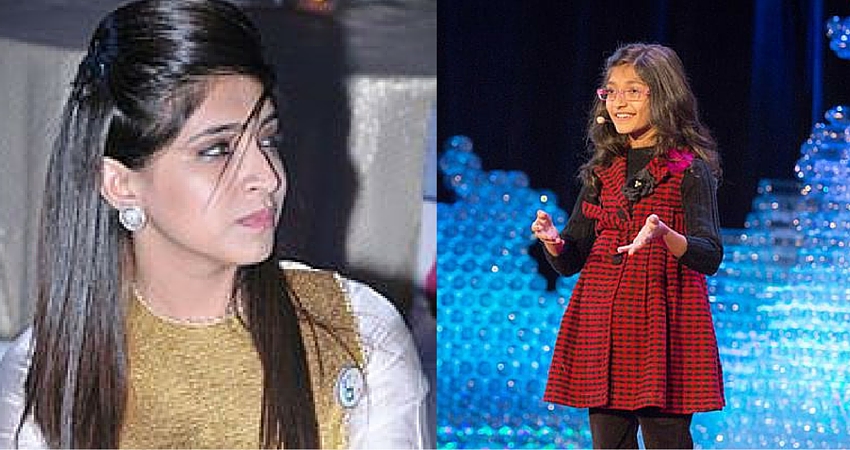 Today, we celebrate National Girl Child Day, with 7 girls, who proved that girls can be anything they wish to be, no matter what.

Girls can be anything they want to be and age is just a number. These 7 girls proved it. Today on National Girl Child Day, we celebrate the spirit of every girl in India.

Here are 7 Indian girls, who will inspire you today.

You may know Ishita Katyal for being the world’s youngest speaker at TEDx, but she’s also an author of a book and a girl who’s questioning what is expected of children. 10-year-old Ishita spoke at a TEDYouth conference in New York on how children don’t have to wait until they’re ‘adults’ to achieve their dreams and how they can make a change in the world today. With this motivation, Ishita wrote ‘Simran’s Diary,’ an amazing children’s book. She is a prime example of how children are the leaders of tomorrow, and that age is nothing but a number.

Aditi and Deepti are sisters who are Chief Operating Officer and Chief Innovation Officer of Robotix Learning Solutions, a robotics education program aimed to decrease the gender gap in STEM (science, technology, engineering and math) fields.

Aditi and Deepti became interested in innovation and analytics when their father made them apply their education to the real world. He would often ask them questions like, “Why is this butterfly a different colour than this one?” From these questions, their curiosity grew.

Aditi says, “Our initiative called Indian Girls Code is a program to inspire and educate young girls to learn to code and develop real-world programs for real-world applications.” Their aim is also to make science, technology, engineering and math more fun through robotics.

We’re all well aware that child marriages are still an unfortunate occurring event in rural areas of India, where most girls are forced to tie the knot at 10 years or an even younger age. However, brave Rekha is an 11-year-old girl who refused to throw away her life. Because of her strength in saying no, she has inspired thousands of girls in India to do the same.  When she attended school, she understood that she had rights and that she wasn’t just an object to be used. After her parents proposed the idea of looking for a spouse, Rekha was terrified.

At a school performance, Rekha told the audience of her refusal to marry and ever since then she has become an icon of hope for young girls across the nation. Rekha Kalindi has continued to write speeches about child labour, why forced marriages should be prohibited and the importance of education.

Sikha Patra is a small girl making a big change in her community. Due to the lack of awareness in her village, Polio used to be a problem. However, when Sikha joined the Kolkata youth group ‘Daredevils,’ things began to change. The group went door-to-door to spread awareness about Polio vaccination booths and how children need to informed and protected from these diseases. Now, this is all done through puppetry; making it even easier for people to understand. Even though she was only 14 years old, Sikha and her group soon made her entire village Polio-free.

Sikha also got acknowledged by the Bill and Melinda Gates Foundation and has begun to campaign for women’s rights.

Watch Sikha and her friend Salim’s video at TEDx here

“A picture speaks a thousand words.”

At 12 years old, Anjali’s drawings became revolutionary and inspirational. Her poster on earthquakes and how to reduce their occurrences was printed into 400 copies and distributed because of how unique they were. Her work has been bought by many well-known organizations, UNESCO, UNICEF, WWF, etc. Anjali has always been an activist, even at the age of 10 where she spoke to underprivileged children at the Integrated Multipurpose Recreation and Hobby Centre (IMRHC) in Bangalore.

She has already made a difference in the lives of the underprivileged as her poster on diabetes raised $ 5000 for the International Diabetes Federation in 2008. The proceeds went to buy insulin for these kids.

Check out her blog for her work

Rashi Anand is the founder of Lakshyam, an NGO based in Delhi aimed to provide education and employment for street children and women in several Indian states. The NGO tackles various problems like slum development, child welfare and women empowerment. And to think, this was all the brainchild of an 18-year-old girl. Even as a child, Rashi had the ambition of making a change in the world. When she was a kid, she set up the Toy Library, which delivered donated books and toys to over two lakh underprivileged children in India. Rashi is an inspiration to girls all over the world, showing us that it’s never too early to leave your mark.

Avani Singh, only 17 years old, has committed her life to being a change maker. She is an entrepreneur from Delhi, founder of Ummeed. This is a program that trains women in slums to become rickshaw and taxi drivers. Without even having a driver’s license of her own, Avani is giving women the opportunity to be physically and mentally mobile. Avani started Ummeed with a single electric rickshaw which went to Kohinoor, a 33-year-old single mother of two. Kohinoor became Delhi’s first female electric rickshaw driver as of September 2012. After this, Avani decided it’s time to become bigger and better and introduced taxi driving lessons into the program.

“Don’t just think, ‘I feel really bad, but what can I do?’ There’s something big out there — or even something small — that everyone can do.” – Avani Singh