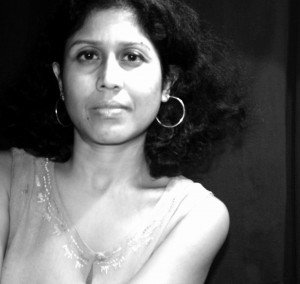 In this series on advocates for women’s rights, we meet women around the world who blog about women’s challenges in different countries.

Rita Banerji is an activist and the author of Sex and Power: Defining History, Shaping Societies, a book that looks at sex and sexuality in the context of power in India. Rita began the The 50 Million Missing Campaign, an effort to raise awareness about the female gendercide in India and stop practices like female feticide, infanticide and dowry murders contributing to it.

My association with Feminism of course began with my own life, and probably long before I even had a word for it!  Even as little girls we have an acute sense that we are being treated as less than boys, however subtle the bias. I define the feminist moment as that moment when that bias registers in your mind as unacceptable, and very importantly, something in you resists.

My first feminist moment I think was when I was 11 years old, and got the highest marks in Math in class. The teacher, a man, looked very disapprovingly at the boys and said, “You should be ashamed you let a girl beat you in Math.” He didn’t even look in my direction as he flung my exam book on my table. I was very upset and told my mother about it. She said, “Ignore it,” like mothers so often advice girls. But I couldn’t. Two things happened after that. Even though I didn’t have any particular passion for Math, I made sure that for the rest of that school year I scored the highest in Math for every exam. And there was something else I did.

My first feminist moment I think was when I was 11 years old, and got the highest marks in Math in class. The teacher, a man, looked very disapprovingly at the boys and said, “You should be ashamed you let a girl beat you in Math.”

The teacher used to come to tutor our neighbor’s children. And he’d warn me beforehand, because he wanted me to tie up my dogs. My dogs were not biters, but they were playful. The week after the exam, when he came to give his tuition I made sure my dogs were out free. He used to wear these big floppy trousers, and he was jumping around with the dogs chasing. There was a basic wrong, that was disregarded, and I was told to just live with it. And today, I have the know-how and options available to me, to name it, address it and demand a redress. But at that age I fought back the best way I knew how, and I’m glad I did!

However, I encountered Feminism as a concrete social and political ideology for the first time when I was in a women’s college in the U.S. — Mount Holyoke College. It was a name and a defined ideology for something I already thought and felt. But that environment was very crucial for me in that it helped me incorporate Feminist thinking into how I saw and defined social order, in context of gender and power, and equally importantly, how I defined my identity as a woman, independently, and within that order.

In 2006 I founded The 50 Million Missing Campaign against the ongoing female gendercide in India. It concerns the misogynistic and violent mass-scale destruction of women as a group. Both India and China constitute 2/5th of the world’s population and in 20 years will have annihilated 20% of women from their countries. It’s estimated that that’s more than the number of people killed in all the genocides in the world in the last century.

Undoubtedly, the female genocide is the biggest issue for the women of India today. The male to female ratio in any country, under normal circumstances, should be about 50:50 usually with slightly more females, because girl children survive better, and women biologically live longer. But in India in another 20 years it will be 40:60 females to males! If this was happening to any other community because of their membership in a group based on religion, or caste etc. we’d have a civil war! Why do we not see that response from Indian women or even Indian feminist groups here? In fact women participate in their own destruction – by killing their baby girls and daughters-in-law!! It is hard to even conceive how the collective psychology of Indian women has become so perverted through this sustained violence that they are self-consuming now!

Then we have responses to domestic violence like ‘Ring the Bell’ of a house if you hear a woman being battered. They say it will stop the battering. Yes, momentarily, but think about what happens to that woman after the bell-ringer leaves? We hear about women getting beaten and sometimes burnt for dowry. What we don’t hear is about the sexual abuse she is put through. She can be gang raped by men in the family, often repeatedly. Just last week I got an email via a journalist in Tamil Nadu where this man and his brother tied the man’s wife to a table, raped her, and then put all kinds of things like chilli pepper up her vagina, and burnt her vagina with a red-hot iron rod. I think this ‘ring the bell’ kind of response to this scale of violence against women in India is not just naïve but very unrealistic! To recognize the injustice of their own genocide and fight back; to demand their right to live not as an act of charity but a non-negotiable human right, is singularly the biggest challenge for Indian women today.

Writing is like breathing for me. My writing is a means by which I engage with, and/or challenge the issues of gender inequality and female gendercide. What I love about blogging though is that I have the freedom to express myself with no reservations and censorship, which is usually not possible with magazines or books!

The mainstream media still sees India’s female gendercide as a mathematical issue (what are the numbers? what is the ratio?) – not a political and human rights issue which is the focus of my blogs.

The mainstream media still sees India’s female gendercide as a mathematical issue (what are the numbers? what is the ratio?) – not a political and human rights issue which is the focus of my blogs. They also view the safety and equality of women as something that society should be talked into “giving.” Not an absolute entitlement that India’s democratic system needs to ensure regardless of whether the public is or is not in the mood for this kind of “charity!” Also blogging is direct communication. You get feedback instantly, and you can continue a direct discussion, which is not possible through books and most magazines.

Yes I do. I deal with it in context of what it has to say. For e.g. there is a lot of denial and defensiveness about the female gendercide. It’s not that they don’t know, they don’t want to know. I often send them a link for e.g. to the news reports on the 2011 Indian census with a note saying, “Maybe it’s time to be updated on what’s going on in your country?”

When someone really wants to engage with you, and they are not just venting out their own personal issues, then they are usually very specific in their critiques, and they will give good, solid counter-arguments with examples. I like these criticisms because they allow for some solid mental engagements and create scope for the growth of my perspectives as well. For e.g. in one piece where I had talked about why women have issues with Feminism, I had said that many women are afraid that if they fight for their rights it would make them less attractive to men. And one man pointed out that there are lesbians too who don’t want to be identified with the feminist movement! And it is true – because even among gay women, there is racism, there is internalized homophobia if you can believe it, and there is internalized sexism in how they often assume and play out social gender hierarchies in gay relationships.

Well, of course I have to say The Gender Equal blog by my campaign, The 50 Million Missing Campaign! One blog I really like, that I discovered recently is written by a very young, under 19, Indian feminist. It’s On Feminism, Love and Other Things by Archismita Choudhury. I am impressed by her clarity of insight into the fact that Feminism is ultimately about upholding the individuality and freedom of each woman, and the family and community does not get a vote in that! That freedom is guaranteed whether the family and community likes it or not! I don’t see this view in many Indian feminists, especially in the older generation. So, I’m actually curious (hoping!) to see if Archismita represents some sort of a changing trend in the younger Indian feminists.