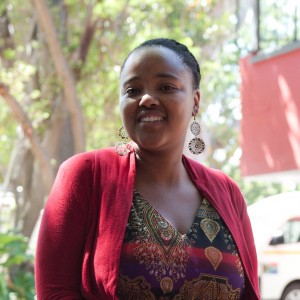 Athambile Masola is a high school teacher in Cape Town, South Africa. When she’s not teaching and blogging, she takes long walks and enjoys cooking. Her personal blog is at ixhanti lam and she also blogs at Feminist SA, a group blog of feminists in South Africa.

I can’t say there was a particular moment when I identified with being a feminist. I have been raised in a matriarchal family with many mothers and I went to a girls school for 12 years with mostly female teachers. Both these experiences helped me form an understanding that I have a place in the world, I have a right to be here and despite (often physical) limitations, I am not inferior to anyone, let alone a man.

I read the poem by Sojourner Truth, “Aint I a woman?” in high school and I started realising that I’m not crazy in thinking about the need for more equality for women, which was a relief because even though I was surrounded by women, patriarchal ideas didn’t disappear. However, I didn’t grow up with the feminist discourse so I didn’t discover the word “feminism” until varsity when I met other women who articulated what I thought and knew as a child. So perhaps early 20s was my discovery of the word “feminism” but the thoughts and the questions have always been there.

It’s so complex depending on woman’s class, race and sexuality. In spite of having a ministry in government designated to deal with “women’s issues” (as though they were an auxiliary issue in society), many women are still facing challenges that previous generations have been dealing with. Because of the chasm between the rich and the poor in SA, women who are not educated (mostly in rural and peri-urban areas) do not get access to resources that might assist in addressing their own challenges, and these are the women in the majority, the marginalised majority.

As women, are we safe to make the choices we need to make in order to exercise our freedoms?

Recently I have been drawn to the idea of security. As women, are we safe to make the choices we need to make in order to exercise our freedoms?  Security can be on a continuum where we refer to physical security (being in a country with high rape statistics I often have to censor my movement or think about how safe I am when I am in certain places) or financial security that can allow certain women choices and other women no choices because of the level of income they have. This also ties into the issue of how many women have spaces to voice out the opinions and grievances with enough agency to make things happen.

I have security in that I am financially independent, educated and I have the kind of social capital that can make things happen (mostly because I have resources, access to information and networks that I can use thanks to my education), however I am the minority. Many women my age (and race) do not have the same level of education which allows a certain kind of security for the kind of choices they can make in order to live the lives they want to live.

I started blogging because I grew tired of being a consumer of information but I wanted to produce ideas and information on a non-threatening platform. I also started reading poetry written by Nontsizi Mgqwetho (I like to think of her as my muse). Nontsizi Mgqwetho used to write in the 1920s in Johannesburg newspapers. I was drawn to her voice and conviction in her poetry in a time when many women were not educated and did not claim public spaces like newspapers.

So blogging is a personal recognition of the right I have to share my voice given the legacy where women (particularly black women) have been invisible in spaces like the media (only to be seen/talked about/written about as a spectacle perhaps, like Sara Baartman). This makes it political as well. I didn’t realise it was a political journey until people started pointing this out to me which further highlights the need for women to create spaces for themselves so we don’t have other people speaking on our behalf.

I don’t know how many people read my blogs, but those who have read them have often said that they enjoy the honesty and realisation that someone is thinking about the things they are also thinking about. I’ve been amazed at how shocked people are by some of the content I write about which makes me realise that there’s a need to keep writing.

I write for a very public blog, Thought Leader Mandela Rhodes Scholars and there’s online criticism. If I feel there’s merit in the criticism I respond but mostly I ignore it. I’m not sure if this is a good idea, but I always think that my job is to write. I have no control over how people will respond, but the fact that they respond gives me the impetus to keep writing. So I deal with it by writing some more.

I think the pieces for a blog called My first time are my favourite because they deal with sexuality which is still an issue shrouded with shame or silenced for women. I still feel awkward talking about sexuality so blogging has allowed me a space to do so and realise that it’s a conversation that still needs to happen for many other women.