She was allowed to go back only after her brother-in-law, at the behest of her elder sister, intervened. ‘He was a patriarchal man; he couldn’t say no to his son-in-law.’

The poverty of being unwanted, unloved, and uncared for is the greatest poverty. —Mother Teresa

‘My mother got married when she was nineteen. She lived in a joint family. My parents had two children and one of them was a son so they didn’t want another child, but then I came along. I heard very often how I was an accident,’ Suchi told me. Her young heart had interpreted it as being unwanted. Her parents hadn’t needed another child after her mother had produced the male heir who would carry forward her dad’s medical practice and the family name.

‘I never had much of a relationship with my mother. My aunt looked after me. I forever hankered for their love, and it stayed with me throughout my life, making me the person I became, insecure, unsure, lonely.’

And always second best to her brother, for whom her father built an entire library of encyclopaedias and reference books so he could focus on becoming a doctor. No such elaborate futures were planned for the daughters.

Girls are not people you grow attached to or invest in because they will ultimately marry and go to another’s home. Boys, on the other hand, will stay with their parents and look after them in their old age— this is what most middle-class Indian parents believe and expect.

At a practical level, parents also devote fewer resources to the development of their daughters (education and nutritious food). This means that if out of three siblings only two can go to school, the boys will go. This inherent belief is hard to shake because for Indian parents, children are investments for their future. Sons get the most support because the return on the investment is higher. Indian society as a whole must reflect on the reasons for son preference because ‘it is a long-standing historical challenge, all stakeholders—civil society, communities, households—are collectively responsible for its existence and for its resolution’.3

While five-year-old Suchi was waiting alone at her teacher’s house somewhere in eastern India, a young woman in her early twenties in Uttar Pradesh—an undeniably patriarchal part of the country—was already waging a full-on battle. Anima* had vowed to own the future her father had planned for her brothers. ‘I wanted to do everything my brothers were doing or were expected to do,’ Anima says. ‘My father was keen for my brothers to study engineering but not for me—a girl—to do a professional course,’ she told me.

He didn’t change his mind even when Anima topped her district in science and mathematics, so she filled out an engineering admission form to study chemical engineering at the Punjab University on the sly. She was accepted into the course, but her father refused her permission to enrol. Anima was distraught and began fasting in protest. When she wouldn’t relent, her father gave in. ‘He took me to the college for all the formalities then brought me back and didn’t allow me to go back for a month.’

She was allowed to go back only after her brother-in-law, at the behest of her elder sister, intervened. ‘He was a patriarchal man; he couldn’t say no to his son-in-law.’

Anima is fifty-six, Suchi is forty-six, but Shiuli Vanaja is only in her early thirties. Vanaja—who is an economist—and her brother Iqbal Abhimanyu grew up in a progressive household. Their parents were social and political activists and there were continuous discussions in their household about various inequalities, including gender inequalities. But when they visited Vanaja’s grandparents, they had to readjust their lenses. 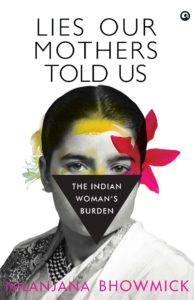 ‘Our parents were activists and we didn’t have a lot of money and we never went to fancy schools or camps with swimming and horse riding. My grandfather had wanted to send my brother to one such camp but my mother opposed it. She said you either send both the children, or none. Ultimately, nobody went,’ the thirty-two-year- old remembers, adding, ‘It’s not like they don’t love me. But it’s just that sometimes you could just see the subtle preference for the male grandchild.’ They are subtle acts, but they leave an indelible mark, which is why we remember them so vividly.

I clearly remember the day when my father had taken my sister and me out for a stroll and we met an acquaintance of his. My father introduced us to him. It was probably the look of pity on the acquaintance’s face, the unsaid exclamation—What a disaster! Two daughters!—that prompted my father to say, ‘They are like my sons.’ He did the best he could but even so he unconsciously killed a little light in me. He always called me his son—I didn’t want to be like a son. I wanted to be the daughter I was. It was a stark portent of what I would be fighting against throughout my life.

This excerpt from Lies Our Mothers Told Us by Nilanjana Bhowmick has been published with permission from the publishers Aleph Book Company.

If you’d like to pick up Lies Our Mothers Told Us: the Indian woman’s burden by Nilanjana Bhowmick, use our affiliate links at Amazon India, and at Amazon US.