Kiran Rao has made two 10 second short films that powerfully punch patriarchy as it is practiced in ordinary families in India, and husband Aamir Khan has shared them on Insta.

Kiran Rao has made two 10 second short films that powerfully punch patriarchy as it is practiced in ordinary families in India, and husband Aamir Khan has shared them on Insta.

Kiran Rao is known for her bold yet candid  film making style. She was the director of Dhobi Ghat (2010) which unfolded Mumbai life with a subtle artistic style, and instantly grabbed my attention towards Kiran Rao’s powerful storytelling. She, along with Aamir Khan, later produced hard-hitting movies Peepli Live, Delhi Belly and Talaash.

And Kiran Rao is now back with a bang!

Yes, she has recently made two short films for Facebook India which have already started to make waves in social media. This time she has amazed her fans with her 10-second films, which is a real metamorphosis for the concept of short films in India.

These movies are recieving huge responses in the social media platforms. Her husband Aamir Khan also shared them on Instagram – one here, and the other here – and shared his amazement by posting the movies and said “Kiran has made some 10 seconds films. I didn’t know it was even possible to tell a story in 10 seconds! She has shown me how,” he wrote in his caption.

These two films are not just the usual short films, nor do they have a clumsy concept. They have such powerful themes and a very short time frame of 10 seconds, that can hold anyone’s attention.

Both the films highlights social injustice in a very subtle manner and make us believe in how times have changed and people are ready to fight back. 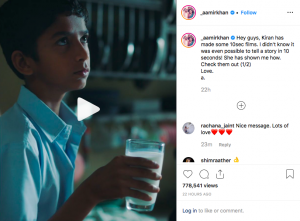 The first film comes up with the nasty gender discrimination at households where a mother blatantly discriminates between her children on the basis of their gender. But it also brings us to the boy who is ready fight back and bring changes, starting from his own house.

It takes a few seconds to show courage 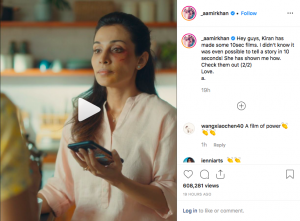 The second film is all about the idea of stereotyping women as a weaker gender by showing the male domination over women in the form of domestic violence. The film also highlights the sisterhood that a woman can show another woman – in this one the domestic helper advises her employer to raise her voice against the violence by giving her a phone after dialling the police helpline number.

These movies really surprised me, that such strong ideas can be conveyed within a very short time span, raising a voice against multiple disparities and the discrimination that rule our country!

Editor’s note: Aamir Khan has since taken down his Insta posts after his divorce with Kiran Rao. You can watch them here.