In response to a Bhuj sect's Swami declaring that a woman who cooks during menstruation will be reborn as a 'kutri', a group of 28 women held a 'period feast' which was supported by many people.

In response to a Bhuj sect’s Swami declaring that a woman who cooks during menstruation will be reborn as a ‘kutri’, a group of 28 women held a ‘period feast’ which was supported by many people.

Every aspect of a woman’s life is questioned or controlled, no matter what it may be. Of these, the most ‘problematic’ issue seems to be menstruation, or periods.

In India a woman is considered to be ‘impure’ during her menstrual period, but it’s high time to change this thought!

A few days ago, some girl students of a college in Bhuj in Gujarat, run by the Swaminarayan Trust, were forced to strip to ‘prove’ that they were not menstruating, since they had been reported to enter the hostel kitchen. This was an act of pure insult.

As a response, a feast was organised by Dr Surbhi Singh, the founder of ‘Sachhi Saheli’ to bust myths around menstruation, which is indeed a much needed move. The main attraction of the event were the badass women wearing aprons with the tagline, “I am a proud menstruating woman”. 28 women cooked and served meals to over 500 people which is  thoroughly  awe inspiring.

Talking about the event, Dr Singh says, “All I did was put a post on social media and people responded. The fact that so many people supported the cause and ate the food is proof that they don’t care about such misconceptions.” She added, “I also feel that more such events should be organised so that the idea is reinforced.”

Though she received a good number of positive reviews, she had to go through a ton of criticisms as well, some who even called it a ‘propaganda’.

But this step shows that an act of courage can sometimes bring out the collective strength of women. 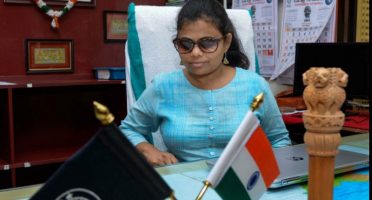 Pranjal Patil - The Nation's First Visually Impaired IAS Officer Is An Inspiration To All!