Meet Shiri Eisner an activist from Tel Aviv who writes about gender issues and women's rights and runs the Panorama – Bi and Pansexual Feminist Community. 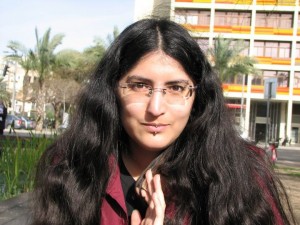 In this series on advocates for women’s rights, we meet women around the world who blog about women’s challenges in different countries.

She runs the Tel-Aviv-based bisexual organization Panorama – Bi and Pansexual Feminist Community and participates in the struggle against the occupation, radical queer activism, feminist activism, transgender and genderqueer activism, animal rights activism, and many more.

She’s currently working on a book about bisexual politics called Notes For A Bisexual Revolution, which will be published in the US next year. She blogs in English at http://radicalbi.wordpress.com, and in Hebrew at http://bidyke.wordpress.com.

It’s hard to point to any particular moment where I started identifying as a feminist. As in many things in life, my feminism was – and is – a continuous process. To illustrate, here are two anecdotes: 1. When I was in first grade, my cousin taught me the term “chauvinist pig.” Though neither of us knew what it meant, we both used it as a curse word. 2. At age 16 I used to attend an LGBT youth group every Saturday evening. Since I was closeted to my parents, I told them that I was going to a feminist group. From these two anecdotes, I conclude that my feminist identity probably developed somewhere between the ages of 6 and 16…

My feminism became far more developed, complex and radical (that is, pertaining to the root, radix, of oppression) in my early 20’s, when I first joined the left wing and radical queer activist communities. At the same time, I also started my BA, where among other things, I majored in gender studies. Academic writings, as well as activism, have since been continuously contributing to my feminist and political thought. I never stop learning, and I hope I never will.

Without a doubt, the one huge influence on women in Israel/Occupied Palestine is the occupation. Israel is a colonialist state, and a highly militarist one at that. And while the occupation does not influence all women equally, it nonetheless affects all of us. Palestinian women – and especially those in Gaza are denied basic human needs such as housing, clean food and water, medical treatment, freedom of movement and freedom of speech. Palestinian women living inside the State of Israel (as opposed to the “occupied territories”) are still denied their basic rights. They are routinely thrown out of their homes (often physically thrown out, not only as a figure of speech) and suffer many other forms of ethnic cleansing and legalized oppression and discrimination. They are routinely subject to police and military violence and harassment, and often live in poverty.

For Jewish women, the occupation first and foremost places us as oppressors. This means that (whether or not we want to) by living here as Jewish citizens of Israel, we are actively participating in the oppression of all Palestinians, including Palestinian women. Often this position means that our political perspective becomes narrowed due to our privileges. It denies us the sensitivity which comes from knowing and acknowledging oppression, and which is vital to doing solidarity work (not only with Palestinians, but also with other marginalized groups).

In addition, the occupation is used to keep Jewish women in their places: In our patriarchal-militarist culture, one’s worth is often measured by how much one contributes to the occupation (for example, by being a combat soldier, etc.). We call this constant praise of militarist masculinity the “national erection.” For many reasons, Jewish women often do not par to this standard, and this in turn is routinely used to silence us in discussions and debates about public matters of state. In addition, Jewish women in Israel are required to contribute to the “demographic war” (maintaining a Jewish majority in Israel) using their bodies. Giving birth – ideally to boys, who will grow up to become soldiers – is one of the most pervasive social demands Jewish women face (we call this the “national uterus”).

I actually don’t blog that much about the occupation. This is because in Israel, this is the one pervasive issue of virtually all left-wing activism. While it’s important for me to write about the occupation in English (where the topic isn’t discussed enough), in Hebrew I prefer to focus on marginalized groups who receive relatively little attention – in particular, bisexual people and Mizrahi (Arabic Jewish) women. Through writing, I aim to provide political understandings which can provide a basis for activism, and lead to material changes – within movements, and in society as a whole.

My English blog likewise focuses almost solely on bisexuality – this is because bisexual issues are no less silenced in English-speaking countries than they are in Israel. In addition, I’ve found that my point of view about bisexuality is quite unique in relation to mainstream bi movements in North America and Europe (where my blog is mostly read). I hope that my point of view, as I share it on the blog, can further politicize and radicalize those movements, and lead to material changes in social attitudes towards bisexuality.

From a more personal perspective, blogging has also provided me with a lot of appreciation from people – online and off. Knowing that I empowered people, or that they learned important things from me is the ultimate reward for writing, and it touches me deeply every time.

Many of my blog posts tend to upset people because I like to challenge their privileges and biases. When I first started blogging, people’s responses would often get under my skin. But throughout the years, I’ve been learning to better deal with them – mostly by remembering that this isn’t really about me as a person, but about them and their responses. This helps me not to take it personally. Whenever someone wants to call me out or shed light on points where I could be more politically sensitive/radical, I always try to keep an open mind and listen.

Notwithstanding, I also notice that most negative criticism about me focuses on four main points: 1. That I am “too feminist”; 2. That I am “too bisexual”; 3. That I am “too Mizrahi”; and 4. That I am “too radical” (as in left-wing). These things all indicate that I’m doing well, getting my points through and succeeding in challenging people.

In English, I am really proud of my post Hot sexy bi babes: media depictions of bisexual women (which is actually a snippet from my book). It addresses a huge problem in social treatment of bisexual women which has hardly been discussed from this angle before. I’m also proud of my Monosexual privilege checklist, which has managed to upset many people – but also empower many others. This is the first privilege checklist describing the privileges of people who are attracted to only one gender.

In Hebrew, I am proud of having translated and introduced three important terms and concepts to Israeli feminist discourse: Mansplaining, rape culture, and male privilege. All three have since taken root within the feminist community in Israel and serve as tools for debate and analysis. In terms of original texts (rather than translations), I am proud of a recent post of mine called How to be racist towards Ashkenazis: a user’s guide (Ashkenazis=European/white Jews) which was inspired by black feminist bloggers A.D Song and Mia McKenzie’s post How To Be A Reverse-Racist: An Actual Step by Step List For Oppressing White People. All of these posts received wide circulation, and also made quite a few people angry!

Your favourite feminist blogs (at least one from your country if possible)?

I don’t follow so many blogs in English, however I would highly recommend A Radical TransFeminist by my friend Lisa Millbank.

In Hebrew, I really enjoy the blog No Redemption by my friend Yossi Mekyton, who writes about radical queer (and other) politics. I also love my girlfriend “xEmmaGoldielox”‘s anarchafeminist blog Profits Before Lives (I wish she’d write more often!). Another excellent blog is Reuma by feminist bloggers Lihi Yona, Ma’ayan Sudai and Reut Cohen.