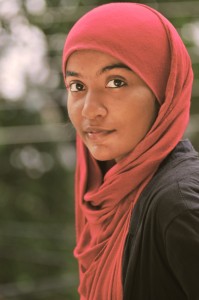 Shifani Reffai hails from Dehiwela, Sri Lanka, and is currently studying English Literature and Film Production in New Delhi. Before University, she worked as a freelance journalist. Other than social activism, her interests lie in creative writing, comedy/satire and fashion/travel photography. Her personal blog is at makuluwo.wordpress.com

The word ‘feminist’ comes with so many subjective connotations, so I personally prefer not to label myself as such. I am rather a humanist than a feminist, and on this ground, I simply work on the belief that women should enjoy the same human rights as men. I’ve always been very passionate about the rights of people, and as a woman, I’ve often felt natural outrage over the injustice that women face on a regular basis under social pressures, in Asia particularly.

It has just been an innate passion and I can’t say it sprouted out of me at any particular period in my life – although my actual journey into social activism began only in 2010. I was 20 and I think I realized that I could do more than write and complain about gender-oppression – I could rally like-minded people, and we could together attempt to actually change things through practical projects, or at least motivate people to fight for their rights.

Particularly as a Muslim woman, it bothered me that religious extremists would oppress women in the name of Islam, and also that many people had a stereotyped notion that Muslim women, judging from their lifestyle and clothing, were indeed oppressed.

Particularly as a Muslim woman, it bothered me that religious extremists would oppress women in the name of Islam, and also that many people had a stereotyped notion that Muslim women, judging from their lifestyle and clothing, were indeed oppressed. So I started out wanting to battle both – this perception that Muslim women were powerless (the women’s organization Reach Out was founded by me and a group of friends, all young Muslim women), and the misconceptions held by extremists about a beautiful religion which preaches love and understanding – not oppression.

What according to you are the major challenges that impact women in your country today?

I should humbly but truthfully concede that I am not the greatest authority to consult on this matter – I’ve only been involved in social activism within Colombo, and that too for barely two years, and mostly with young men and women often about issues relevant to their age group and culture. Sri Lanka is very diverse in its cultures and social interplay, plus urban and rural women have such contrasting lifestyles and face such different challenges – it’s difficult to generalize.

Domestic abuse is a huge problem, from what I have gathered from my interaction with more experienced women’s NGOs such as Women In Need; fierce patriarchy is rampant especially in rural areas, and this glorified system of social hierarchy strips many daughters and wives of their autonomy, leaving them powerless and financially and socially dependent on the men in their lives. From working with the NGO Al-Muslimaath, I’ve discovered this total dependency on men happens in cities as well, as a result of culture – for example, a woman is told by her family she should not do higher studies or work and must commit to her role as a wife and mother instead – and in complying to these cultural norms, when her male relatives die or leave, she is left destitute and helpless.

Some issues that I personally would like to raise about Sri Lankan women are – a. Sexual harassment in public: not only the incessant eve-teasing  but also the physical sexual harassment in buses; often the perpetrators get away and women don’t speak up (Reach Out’s project Man Up! Real Men Don’t Harass Women sought to educate young male and female school students about the importance of self-defense, standing up for other people, and respecting women as equal human beings) b. The role of culture and religion in oppressing/liberating women – I believe Sri Lanka is a very religious country, in the sense that many people have a very strict sense of ritual and maintaining the status quo in the name of cultural and social norms. Religion and/or culture play a part, for instance, when a woman is forbidden from socializing outside the house by her husband or father, although of an adult age, because it is allegedly not the ‘proper’ thing for a woman to do (I have seen this happen to women of all Hindu, Christian, Muslim and Buddhist origins).

Why do you blog about these issues? What does it give you? What do you feel it gives others?

My blog as Makuluwo is not particularly a feminist blog – it is simply a blog that expresses my random thoughts and ramblings. The blog is usually very tongue-in-cheek and humorous, although sometimes the thoughts on it happen to be serious ones about the rights and issues of women. It just gives me personal satisfaction to have my thoughts heard, as is the case with any blogger I would think. I blog about stuff that’s important to me, it’s as simple as that.

My readers enjoy reading what I write, and I suppose it gives different people different things depending on their personal opinions – but mostly I would hope it gives them food for thought. When it comes to serious posts about feminist issues, I hope it does more than that and makes them see things through my post’s perspective, to mentally join the army against social injustice. I sometimes write posts of this nature for the Reach Out blog, although that blog has several authors who are also volunteers in social work.

Criticism bothers me only for a short spurt of time – after that, I rationally consider it and try to take what good I can from it, or else completely put it out of my head and move along.

Sometimes my views are not popular, sometimes they’re politically incorrect. The Sanskrit dramatist Bhavabuti said ‘Time is infinite and earth is vast, some day there will be born a man who will appreciate what I have said’. And even if nobody does, I honestly don’t care, I will say it anyway. Criticism bothers me only for a short spurt of time – after that, I rationally consider it and try to take what good I can from it, or else completely put it out of my head and move along. If you feel you have something important and good to say, don’t hesitate for any reason.

On the Reach Out blog I wrote a piece that was extremely popular among the blog’s followers called The 12 Commandments in the Holy Book of Self Empowerment which gives practical tips to the Sri Lankan woman. On my personal blog as Makuluwo, I particularly enjoyed writing Women in Western Music 1960s-2012: The Dehumanization & Fall From Grace because the issue of the over-sexualization of women by the media under the guise of female empowerment has always bothered me, and the post was my attempt to provide a coherent argument around that.

I don’t follow blogs on basis of their feminist tone but rather if they have anything intelligent to say. So I cannot really point out ‘favourite feminist blogs’ for you, but I can tell you that some of my favourite talented female bloggers from Sri Lanka have been Aamina Nizar, Gypsy Bohemia and Gutterflower. Besides that I also enjoy reading the posts on the Young Feminist Wire.