Sonora Jha’s book How to Raise a Feminist Son is a love letter to parents everywhere, with questions that hit home, such as, “If sexism is a male invention, why is fixing it women’s work?”

Here is a story I am sharing for the first time: I was pregnant full-term with my son, checked into the hospital, and pacing the floor as labour pains began coursing through my body. Initially far apart and tolerable, I continued to pace the floor, my mind on other things. In the next few hours, my body would go from zero to sixty and I’d soon have a baby put into my arms, but at that time, as my uterus began to do its thing, my mind was focused on something entirely different.

“Will he be a gender warrior?” I worried, as I waddled up and down in a flapping delivery gown. “Will he be an ally, actively make space for women and nonbinary folk, and not be a feminist just by declaration?” Some women panic about the epidural not working. Others fret about the blood and gore. Most just want a safe delivery and healthy baby. I, on the other hand, stood there, hand on belly, and prayed I would heave a feminist right out of the birth canal.

Given the above scenario, it should come as no surprise that when I heard about the upcoming publication of How To Raise A Feminist Son, I was all over the book like a rash. It did not disappoint. Sonora Jha’s new book—part memoir and part manifesto– is a love letter to parents of boys everywhere, and she, entirely unbeknownst to her, is my new best friend.

Thinking of how to raise a feminist son

The book takes us on the author’s motherhood journey and her decades-long work in raising a feminist son. Through glimpses into her marriages and family of origin dynamics, we learn about her struggle and efforts to disengage from cycles of patriarchal violence and actively choose another reality for her only child. This journey takes her—and us—from Mumbai to Bangalore to Singapore, eventually arriving in the United States, where additional layers of identity like race and immigrant life become both a challenge and a boon.

The author goes into organized detail about how she deployed every cultural marker known to humankind in the gender education of her son. But first, we witness her reaction to finding out she was having one. I laughed through this chapter because my response was so similar. Several months before the water burst from our respective amniotic sacs, it dribbled from our eyes. She cried. I bawled. We both wanted girls and now what were we to do, with this odd gift of a male child?

I could tell you what I did, given that I’ve since converted to a card-carrying member of the Raja Beta Syndrome Club, the feminist version, but let’s circle back to Ms. Jha.

A woman with a Plan

She was clearly a Woman with a Plan.

Seeking inspiration from her Hindu background, she dived deep into the world of mythology for role models. From questioning what the goddesses would do in any given scenario, to cherry picking relatively feminist gods like Krishna, she took a fine-toothed comb to the religious resources at her disposal and sought inspiration.

From teaching her son to let women take up space to questioning, “If we loved them into being dangerous, did we love them at all?” Ms. Jha deconstructs traditional notions of masculinity in her endeavour to rebuild a gentler, inclusive gender construct for her child. She calls this, “love leaning into a nonbinary space” and offers us an alternate reality where boys reimagine the world as co-creators, not as its primary architects, hammering together structures for everyone else to inhabit.

She speaks of her early struggles with the solitary parenting of a young child, the resultant depression, and days spent in isolation. It reminded me of a term frequently used in the United States for mothers in similar situations: Baby Jail. Even as her marriage began to crumble, the author’s dedication to her son’s feminist education was unwavering. Beginning when he was mere months old, she held him close and read to him, challenging gender bias in books and nursery rhymes as was age-appropriate.

Roping in all possible resources

And then there is her first love: the movies. She used the moviegoing experience to invite her child to look at the world through a gender lens. Gender neutrality is not enough, and a conscious examining of gender is required when exposed to all media. From exploring 16th century feminist fairy tales to telling her son the Titanic didn’t sink, she keeps it honest, relatable and frequently funny.

In addition to deploying media—books, nursery rhymes, movies, advertising, and video games—as tools for education, she smartly created a human library of feminist role models in her child’s life. A village is important for all children. If you plan to raise a feminist, it helps to have your village reflect that.

How to raise a feminist son if you’re surrounded with family that may interfere?

Admittedly, it was far easier to do in a place where you can pick your feminist family and distance yourself from your blood one, away from them in a faraway land. But it also made me wonder whether this would have been possible in a non-immigrant life, staying in the midst of the usual messy desi family. Would it also mean that the person then lived in an echo chamber and did not as frequently have to face typical patriarchy-riddled society?

In addition to exposing her son to media, (as the author is a media studies professor, I could see why that was a focal point) the book debated what kind of media he needed to be shielded from, and, as a step further, what kind of men he needed to be shielded from, her birth family included. As she accurately observed, “You will raise a feminist boy, but will the world be ready for him?”

A commitment towards parents of girls

The author sees raising a feminist son as a commitment to the parents of girls.

In a world she describes as “not set up to see women as humans”, she offers a perspective on the development of masculinity as identity by omission. In saying, “We love our sons and raise our daughters”, she advocates a loving vigilance toward our sons, rather than suffocating control over our daughters.

We’re treated to the constant dialogue between mother and son

The part of the book that appeals to me most was the author’s generous sharing of her son’s perspectives.

This book was a back and forth between a mother’s ideals and a son’s questioning, acceptance, and becoming. One gets the sense of a constant dialogue between the two, one that stretches over a couple decades, rather than giant sit-down conversations, only occasionally held.

Several observations and questions hit home, such as, “We need to train men to read women, the way women are trained to read men”, “We disempower gender and empower humans”, and my favorite, “If sexism is a male invention, why is fixing it women’s work?”

Suggestions and pointers easy to implement

Each chapter ends with a list of action items you can immediately employ with your own son, in addition to a delightfully rich list of learning resources at the end.

Far from being preachy, there is more than one chapter devoted to what happens when either the parent or the son slips up. The author smartly recognizes that not even the most driven project has a 100% success rate, and there will be times when mistakes or regressions occur. There will be ruptures, and a feminist man is groomed to spot and repair them.

This book brings hope that our sons can be educated to see. To see is to 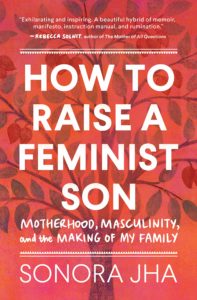 render visible. And so much of patriarchy is about the intentional, convenient invisibility of women—both their work and their whole selves.

In conclusion, why raise feminists and not just kind men? Ms. Jha puts it so poignantly when she declares, “Because they are turning their compassion, kindness and empathy in its attention, to the female condition, which is the condition of half of humanity.” The author speaks of feminism as a new way to love, and like I’ve already mentioned, How To Raise A Feminist Son is a much-needed love letter to parents of boys everywhere.

If you would like to pick up a copy of How to Raise a Feminist Son: a Memoir and a Manifesto by Sonora Jha, use our affiliate links at Amazon India, and at Amazon US.