Laxmmi Bomb – A Big Blast Or Yet Another Failed Representation Of The Trans Community?

Akshay Kumar claims his upcoming film Laxmmi Bomb will be a 'big blast.' Has Bollywood yet again failed to represent the LGBTQIA+ community? 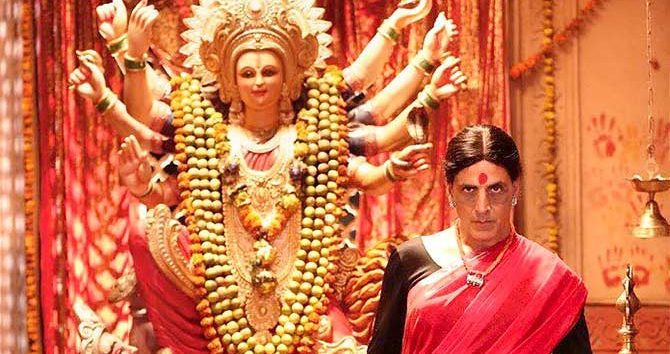 Akshay Kumar claims his upcoming film Laxmmi Bomb will be a ‘big blast.’ Has Bollywood yet again failed to represent the LGBTQIA+ community?

The teaser for Akshay Kumar’s upcoming film Laxmmi Bomb released earlier today. Laxmmi Bomb portrays a straight man whose body is taken over by the ghost of a trans woman played by Akshay Kumar. While the movie has already garnered a lot of attention since the release of its poster earlier, it still shows a transwoman played by a cis-gender man.

On the one hand, while Laxmmi Bomb features the character of a trans woman, trans actors across languages continue to await screen space. Similarly, mainstream media seems to have moved away from the negative or comedic portrayal of the trans-community. However, the movie still fits into the list of films that feature cis-gender actors as trans characters.

Similarly, the 2019 film Ek Ladki Ko Dekha Toh Aisa Laga was centred around a lesbian relationship feature two straight female actors. And not to forget Kubbra Sait’s character in Sacred Games, which once again is the misrepresentation of the transgender identity.

Where is this ‘representation’ that Bollywood speaks of?

The supposed ‘inclusivity‘ of the LGBTQIA+ community had an undertone of homophobia. Queer characters were usually side-lined or used for token representation in a plot revolving around mainstream characters and heterosexual relationships.

The 2008 film Dostana is a good example of this misrepresentation and homophobia. The film with two straight characters posing as a gay couple and showing the ‘hahas’ about the lives of gay people is inexcusable.

Often, films also used queer identities and relationships as plot-twists or ‘the big reveal’ in the story. The industry may have slowly moved towards portraying films about lives of the queer community, why is representation compromised?

Does Bollywood really lack the reach to find trans-actors?

Back in 2018, Faraz Asif Ansari, who directed India’s first silent trans-film Sisak, looked to Twitter to find a trans woman actor to play a character. Despite a wide search, Ansari hit dead ends and reportedly never found an actor. Backed by big production houses, is it really believable that Bollywood directors lack the reach to find actors?

The continued misrepresentation of trans characters only begs a question of positionality. Can straight men and women play roles of people from a community that is forced to live a different life altogether? Is it justifiable for cis-men and women to pretend on screen to be people with complex experiences?

Against the background of the Transgender Persons Bill, delivering the right messages to a large audience such as that of Bollywood becomes important. Perhaps, Indian cinema requires a more mature outlook in terms of inclusivity-based films. The trans community still awaits rightful representation.