Dear Richa Chadha, daughters cannot be, and should not be a 'cure' for misogynist fathers. Expecting this is an unreasonable and unfair burden on them.

Dear Richa Chadha, daughters cannot be, and should not be a ‘cure’ for misogynist fathers. Expecting this is an unreasonable and unfair burden on them.

A tweet by actor Richa Chadha that implies that having a daughter can “cure” men of their misogyny, only feeds into the patriarchal system that blames women for their troubles, and fails to acknowledge that men are capable of self-improvement in their own.

As brilliant, intelligent and resourceful as women are, they are (quite unfortunately!) not magic. They cannot, for instance, cast a spell that automatically rids men of their prejudices and bad behaviour. And while pop-culture would have us believe that women can “inspire” men into becoming better people, real-life doesn’t work that way.

Which is why, a tweet by actor Richa Chadha (which she has since deleted) was bizarre and problematic. She wrote, “Every angry, entitled man should be blessed with a daughter…It’s the best cure for c/overt misogyny.” 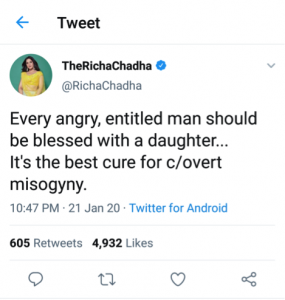 Many responded to the tweet pointing out that for the daughters of such men, it would be a really bad situation. I am glad that the tweet is no longer up.

The purpose of his post is NOT to shame her/ “cancel” her or to encourage others to troll her. However, in our society, the idea that a mother/ sister/ wife/ daughter can reform a man is a popular notion, which is why it must be disabused every time it comes up, and especially when it comes from a popular celebrity (even if it is ironic/sarcastic humour as she suggests it was; and even if it is based on her personal experiences.)

Women, especially daughters, are NOT rehabilitation centers for men

On the face of it, this sounds like something that might just work. After all, it is not unreasonable to hope that men would want the best for their daughters, and in the process of empathizing with their daughters will lead them to also be more understanding of other women. However, as we have seen again and again (and even with women), it is always possible to see discrimination and hate when we or our loved ones are at the receiving end, while at the same time being discriminatory and hateful towards others.

Also, by insinuating that men would be less misogynistic, if only they had daughters to love and care about, the blame suddenly is placed on the heads of all the daughters in the world who have not been able to “cure” their fathers of their misogyny.

Women are not natural born therapists/rehabilitation centers, and expecting them to be so is just another manifestation of how patriarchy cons women into blaming themselves for societal and cultural injustices.

Fathers can be a daughter’s worst nightmare

Many were quick to point out in response to Richa’s tweet, that while the man would not be helped, the daughter surely would suffer. We all have known that one girl whose father is “strict.”

For many women, the inside of their home is scarier than the outside. This report, from December 2019, is about a man who allowed his “friends” to rape his own daughter for money. In Karnataka, a court finally held a man guilty for raping his daughter in a 2017 case.

We still live in a country where fathers kill their daughters in the name of family “honour.”

Having a daughter did nothing to make these men less misogynistic. If anything, it provided them with an easy target for their worst impulses.

Even loving fathers can cause harm

Granted, these are extreme cases. Most men do not (or so we would like to believe) engage in such violent and abusive behaviour.

However, even the most loving fathers can and do behave in ways that are misogynistic. Especially in a society like ours, where the “father,” as the ‘head of the family” is supposed to be an all-powerful protector and provider.

Fathers who in the name of “protecting” their daughters, restrict their movements, their friendships etc violate their daughter’s privacy and freedom.

Fathers who by coddling their daughters create a “papa’s princess” syndrome, which leads women to be excessively dependent and/or meek.

Fathers who constantly shut down arguments with “you’re too young, you don’t know anything,” can cause a loss of self-confidence in young girls and may continue to infantilize even their adult daughters.

Fathers who fat-shame their daughters, because “she should lose weight for her own good.”

That is because misogyny is not about “hating women,” it is about preserving the status quo and the systems that benefit men over women. And men have a selfish interest in ensuring that those systems stay intact –even when they are fathers of daughters.

How many women does it take to change a misogynist?

When I was in college, my counselling psychology professor, told us something in class that has since become a mantra I repeat to myself whenever I come across stubborn people who refuse to change their bad behaviour. It takes the form of a popular joke.

“How many psychologists does it take to change a light bulb?”

The answer is: Just one, but the light bulb must really WANT to change.

This silly sounding joke actually holds the key to a great truth of human nature –people don’t respond to outside influences to change, unless the need to change is already within them.

Of course, not all fathers! I have female friends who have great relationships with their fathers. It is not surprising at all that they credit their feminism to the support and encouragement of their fathers.

Fathers truly can be a guiding force in their daughters’ lives. And yes, some men might feel inspired by their daughters to be better people. But that can happen only if the seed of self-improvement was already within them.

So can we please, please in 2020 at least, throw the notion that having a female relative can make men less sexist/misogynistic, into the dustbin?