Talking openly about periods is still taboo in most societies, even after something like the Padman movie. When will this change?

I remember that the other day my friend and I were at a cafe, and all of a sudden the topic of menstruation or you can say ‘periods’ came up, and she started discussing how sick she feels due to PMS (or Pre-Menstrual Syndrome). There were a group of ladies seated at the next table and the moment they heard about ”P” word… they began to look at each other in astonishment (believe me it felt as if we were aliens and as if they have never experienced it all their lives)…. and after a few seconds they began to giggle, and to top it all, we had become the cynosure of all eyes (felt like celebs for a moment!). However, after some time all of that died off, and they left the place.

That is when I realized how even after stepping into the 21st century we are ashamed to accept our womanhood or our own reproductive system with pride, and feel ashamed when someone l even mentions it.

Moving on… (I promise we aren’t going to move away from our topic!)

Why are we discussing this?

The reason why this topic holds so much importance is that by now the entire world, to be honest, knows about periods/ menstruation/ chums/ bleeding/ that time of the month/ that phase of the month/ happy birthday… so on and so forth. We have tried to camouflage menstruation by all means, but it no longer needs to be done, since it is natural and a biological feature every single woman is born with.

With so many Whisper/ Stayfree/ Kotex ads doing the rounds, even the younger generation has become aware of the fact that women do go through some change every single month and hence they need to use these.

But! But! But even though we know that it is streamed on TV or the Internet so openly, we still choose to ignore it or not talk about it, because talking about it still remains a taboo. Why? Because our society feels it is a women’s problem (Auraton ki Bimari or Aurat ki problem) which shouldn’t be known to men or even kids. Even today if you dare to speak about it in the open, you are bound to be stared at, because ”Periods ke baare mein khulle mein bolna mana hai!” (Talking openly about periods is taboo!) It should remain a secret! No one should know about it!

In short, our tradition and culture does not allow open discussion on a topic which is restricted to women only.

With advancing technology everything which our older generations did not know is available simply with a click. The Internet full of websites which can provide information about menstruation/periods, and absolutely nothing can be hidden. There is information blooming from every corner on the internet, and there are also loads of memes on periods and related humour, ensuring that the kids of today know everything.

Why do we need to talk about it?

Young girls remain misinformed and are in for a rude shock when they actually go through that phase of the month. Imagine stepping in to menarche and not knowing what it means and how it happens. When girls aren’t aware about it half of the times they end up getting bullied by boys either in their classroom or school, which is enough to leave a bad impact on the mind of a young girl. It is just as important to educate and sensitize boys over the topic of menstruation so that they understand about menstruation.

Talking about menstruation/periods isn’t a crime. Understand that is a natural process every girl has to go through in her lifetime and that’s how girls have been created by the Almighty. Educate your little girl about menstruation, tell her why it happens. Teach her to talk about it without shame, for there’s nothing to be ashamed of.

The stigma and taboo related to menstruation needs to end and only we can help in doing so.

Let me end with an apt quote by Judy Grahn: Menstrual blood is the only source of blood that is not traumatically induced. Yet in modern society, this is the most hidden blood, the one so rarely spoken of and almost never seen, except privately by women… 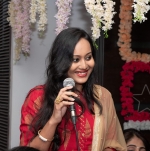