30 women came together in response to a call out on Facebook, to walk together on the night streets of Delhi, to commemorate Nirbhaya.

30 women came together in response to a call out on Facebook, to walk together on the night streets of Delhi, to commemorate Nirbhaya.

This picture was taken at 2:30 am. At Munirka bus stop. 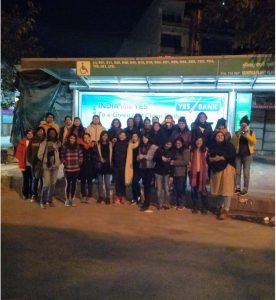 It’s 3 am as I am writing this. A little overwhelmed. Today is 16th December, the night Nirvaya was raped.

A group of 30 women started walking from PVR Anupam, the same theatre she and her friend walked out of after watching the movie, ‘Life of Pi’. And post that took that ill fated bus that halted at Munirka. And we all walked for around 2 and a half hours from 12 am to 2:30 am and reached that place.

It was cold. Bone chilling. Every place brought back memories of what we had read in newspapers. Yet we walked. In memory of one woman we never knew. We were stopped by the police twice, asking why were we walking. We saw buses moving. My heart pounded a thousand times thinking of that night. 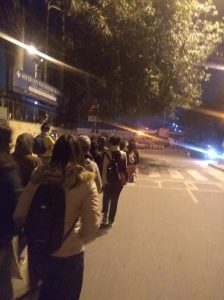 But we felt safe, as there were 30 of us women. Cars sped by. Some honked at us. Yet we marched on. Women supporting women. We kept walking.

Public spaces are safest when women are around, this is what each one of us said.

This city stabs you with fear each time night falls. We as women make our steps faster, or look for company. This is a weird city. Yet we marched. Marched for that one woman and many. 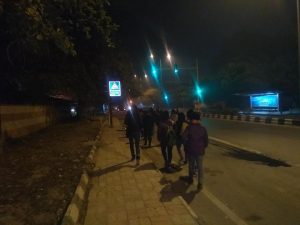 I have always wanted to walk late at night listening to music. Today I did. And I talked to Nirbhaya.

It was after her that the conversation around sexual violence came to India’s living rooms and still is. I just felt she walked with us today. The cold air, the buses, the Delhi sky, the autos… everything was overwhelming.

It’s strange that though this night sky belonged to us, we had to form a group to walk out. But we did. Something so overwhelming today. I am just sitting on the bed, did not change my dress after coming back, and am thinking of a woman we walked for today, an unknown woman who brought us together. 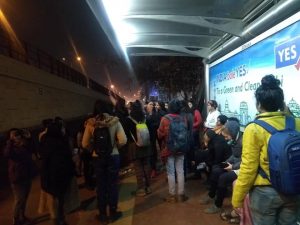 Also while coming back with my friend Priyanka, I asked the policeman who was nearby, for his number, so that we can feel safe. He not only gave us his number, but spoke to our cab driver to drop us off safely. He even got the cab and the driver photographed.

Yes, we reached home safely. I called the policeman to inform him. He himself was so overwhelmed. He said, “Thank you Beta. Main aapki call ka wait kar raha tha.” (I was waiting for your call). Hearing my voice, he sounded relieved, like a parent.

I kept the phone down. Still thinking, wish that night the police were there to ask her, if Jyoti Singh had reached home. If only the bus had been checked. 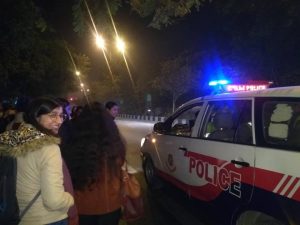 Feeling so overwhelmed today. Not sure what I am writing.

Maa, I am sorry I did not tell you that I was going for a night walk. I always do, but now I just had to do it for her. You would have not slept the whole night if I had told you, and I’m am sorry for today.

This night walk was organised by Women Walk at Midnight – 16th December to commemorate Jyoti Singh a.k.a Nirbhaya. A walk from the point she left PVR Anupam theatre after the last show of Life of Pi, around the city, ending back at the Munirka bus stop.