Dear Chetan Bhagat, Do Understand That A No Means ‘NO!’ Even When It Is Said Politely

When does ‘harmless flirting’ become harassment? When powerful and reputed men like Chetan Bhagat ignore a woman's discomfort and disapproval.

When does ‘harmless flirting’ become harassment? When powerful and reputed men like Chetan Bhagat ignore a woman’s discomfort and disapproval.

The #metoo movement has taken India by storm as more and more women are finding the courage to come forward and open up about the harassment they faced at the hands of rich and powerful men. One of the latest name to join this infamous list of harassers is the celebrity author Chetan Bhagat.

A journalist (who prefers to remain anonymous) came up with Chetan Bhagat’s name as having sexually harassed her, when women were speaking up, naming their harassers.

As per the report, he flirted with a woman journalist on chat and said he was trying to ‘woo’ her. The journalist’s screenshots of this chat have gone viral. 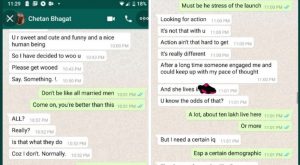 The author has issued a statement owning up to the chat and has said that “his intentions were not wrong”. That he was “only getting friendly as he felt a strong connection” with the recipient of the messages.

However, post that, another journalist came forward on how the author had once made inappropriate demands to see her picture while she was doing a telephone interview. This had creeped her out.

The question that arises here is, when does ‘harmless flirting’ become harassment? In this particular case, the moment the girl said that Chetan was married and that she hoped he was kidding, she made her stance clear. She did not like the route this chat was taking, and tried to steer it back on to neutral grounds. However, when he persisted it bordered on harassment.

The moment a woman says that she is not comfortable with a certain dialogue, action or discussion, is the moment the line is crossed. It is not always easy for women to say ‘no’ to a man of power and recognition, even when they are not comfortable with the situation. If they have a professional relationship that they need to maintain and have to deal with the said person on a daily basis it becomes even more difficult. They would probably refrain from being outright rude, and will instead try a polite but firm way to tackle the situation.

A woman colleague once confided that her married boss would keep asking her out for dinner on the pretext of having a one-to-one meeting on her professional goals. The one time she did go out, the evening was filled with wine and flirting. She quickly changed the conversation to his family life and started asking questions about his wife and kids. The man got the idea that she was not interested and left her alone post that. But some men find it difficult to believe that a woman might not be interested in them and feel that she is only ‘playing hard to get’.

As always fingers are being pointed at the journalist for trying to get her two minutes of fame by calling an innocuous chat a harassment, and trying to tag on to the #metoo movement. A person has even said that now a man can’t even talk to a woman without fearing that it would be taken as a sexual overture. This is the attitude which stops women from coming forward.

Chats, flirting, harmless banter are all acceptable only when both the parties are agreeable to it, not when one side is saying no, even if gently.

Men, listen to these women’s voices

It is only now that women’s voices are being raised against injustice and is being heard. They now have a platform on which to talk about any act that was offensive to them, and each woman has a right to tell her story. No woman will ever talk about an incident which was shameful and humiliating to her, just to gain the spotlight. They do it to ensure that no one else has to go through what they went through.

It’s in the hope that the slow change that the world is going through gains momentum and becomes a movement which will make this world a better and safer place for women.

Register at Women's Web to get our weekly mailer and never miss out on our events, contests & best reads - you can also start sharing your own ideas and experiences with thousands of other women here!
sexual harassmentworkplace harassment