Priyanka Gandhi’s Denims & Top Clearly Matter; Like All Our Clothing Choices Do?

Chauvinism reared its ugly head once again on Twitter, this time against politician Priyanka Gandhi Vadra and her choice of clothes.

Chauvinism reared its ugly head once again on Twitter, this time against politician Priyanka Gandhi Vadra and her choice of clothes.

Recently, Congress Party General Secretary Priyanka Gandhi Vadra changed her Twitter display picture in which she was wearing a saree with a long-sleeved blouse to one in which she is seen wearing denims and a western top. Soon began the onslaught of disparaging comments which questioned her varying choice of clothes at different times and used that to undermine her credibility.

Such incidents make one wonder if we have actually stepped into the twenty-first century or are still living in medieval times. Priyanka Gandhi might belong to the opposition party which currently does not seem to have many fans in our country. Regardless of political affiliations, what she chooses to wear is her personal decision and she should definitely not be answerable for it (nor for that matter should any woman be).

It is ridiculous that she is being questioned for wearing something as innocuous as denims and a top. In today’s day and age, it is almost a uniform for most women in the metro cities.

Gandhi is a public figure but let’s think about our own selves. Is it not true that even in so-called modern times, we still think twice about what we are wearing, before we step out? Is it too short, tight or revealing? Am I wearing too much make-up? Am I attracting attention? Will I give the wrong impression? Most women are plagued by these questions when deciding on their wardrobe.

If they are not dressed according to socially acceptable standards, then it’s obvious that they have a ‘questionable character‘. After all, no girl from a ‘respectable family’ will wear ‘clothes like that’. Judging people is almost second nature to us now. It is sad that these set standards are so ingrained in us that they have entered the very fibre of our society.

Another aspect of this is the ‘symbols’ of being married that a woman has to carry. If she is married but not wearing ‘sindoor’ and ‘mangalsutra’ then once again, let’s judge her and label her as an immoral woman.

On the one hand our women are flying fighter jets and on the other hand, they are still struggling against the yoke of patriarchal norms. We still have to follow age-old archaic laws even if they don’t make sense anymore.

I believe that what we wear represents us and hence we should wear what we are comfortable with; what gives us confidence and makes us feel beautiful. Whether it is a saree, salwar suit, skirts or shorts, the choice should be made based on how we want to live and not on how we will be labelled because of it.

Let’s not shame our women for what they wear. After all, we never shame men for their rather limited choice in clothes! 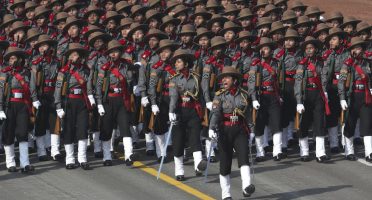