I was devastated. I had lost track of my life. I was entangled in the legal proceedings of a bitter divorce case. I, who was the last person on earth to believe that my relationship can end on such a bitter note, was witnessing my own marriage to crumble like a house of cards. Probably I was a fool – a fool living in a fool’s paradise who hoped against hope that the house of cards can survive every storm. Back then, I had become an embittered individual who was afraid to even to talk to friends, who all seemed happy and content with their lives.

At this junction of my life, I met him. Or rather, I became his friend because we never actually ‘met’. It was a virtual friendship which is in vogue these days.

I normally never accept friend requests from random strangers on Facebook. So this friendship blossomed on Goodreads. I am a born bibliophile and what can be a better place for me to spend my precious time than Goodreads? I was and am an active user of Goodreads. Very few persons in my friend circle use the site, or read books to be precise. So on Goodreads, I connect with some like-minded strangers who actually love to read just like me. He was one of them.

Lets call him Mr. Shenoy as I don’t want to reveal his name on a public forum. He was the one to send me a friend requests. After I accepted his request, he initiated a chat conversation. As Goodreads doesn’t have any chat messenger like Facebook or Yahoo, we found it very inconvenient to carry on our conversations, so when he requested for my whatsapp no., I gave it to him.

Mr. Shenoy hails from Kerala. He is a software engineer by profession and a bibliophile just like me. He was working in Bangalore at that point of time. He turned out to be four years younger to me in age. But people these days say that age is just a number, and Mr. Shenoy belonged to that school of thought.

Though we started our friendship discussing books, he soon drifted to other topics. And I was startled when I realized that most of our conversations centred around Mr. Shenoy complimenting me on my looks. He seemed to be quite enamoured by my so-called ‘pretty’ face. He started asking me questions like whether I use lip-gloss or lipstick on my lips, or why I wear mostly ethnic clothes and why not jeans. I noticed him stalking my Facebook profile.

The case of my ‘beauty’

Then he came to the conclusion that I don’t look my age. “You are 32, and yet you look like 25.” I did not take offence. It simply meant that my age-miracle creams and visits to the beauty parlour were paying dividends. Though I always wanted people to compliment me on things other than my looks, like intelligence or personality, the sad truth is that the Almighty has made intelligence invisible, whereas a pretty face or fair complexion remains visible to all and sundry.

The fact is that my ‘beauty’ has not served any purpose till now other than attracting all the wrong kind of guys who have been nothing but sheer nuisance in my life. Mr. Shenoy just happens to be a case in point.

“How do I look? What do you think?” he asked me. He had very average looks, a darkish complexion and a big moustache. He was the kind of guy whom a girl will not give a second look to. Yet I thought this kind of telling-the-truth might hurt him. “Nice”, I said. “You actually think that I look nice?” he was super excited now. “Yeah”, I said. I don’t want to spoil anybody’s excitement, you see.

“What caste are you?”

Now let’s focus on the background history of Mr. Shenoy, which will explain the actual reason behind his motive for this friendship. Once upon a time, our Mr. Shenoy fell in love with a girl. That girl was his classmate in engineering college. They were in a relationship. But Mr. Shenoy hails from an orthodox family which doesn’t approve of inter-caste marriages, and the girl was from a ‘different caste’. Mr. Shenoy knew that his family will never approve of his marriage with that girl. So during the final year of college, he told her about his inability to marry her and they ‘amicably’ parted ways.

“One should respect their parents and listen to them, nah? After all, they have done so much for me.”

“What? You broke a relationship for as silly a reason as caste? That too in 21st century?”, I was shocked.

“What else can I do? My family is very orthodox. By the way, the girl has married someone else and living happily with her husband and kids.”

“What else will she do? And what are your future plans?”

“I will marry the girl whom my parents deem fit for me. But she was my first love. Mind it.”

“What does my caste have to do with you?”

“Nothing. Just asking, if you don’t mind.”

“No. I do not belong to your caste. But I had married a guy from a different caste, and it was an arranged match.”

Mr. Shenoy then told me that his ex-girlfriend looked just like me. “Though you are prettier than her”, he added. So now I have a South-Indian look-alike. And all these years I was oblivious to my look-alike being present in India itself, eh? It was precisely because of this fact that he was interested to be my ‘friend’, according to his version. At this, I wondered why I should be befriending him in the first place. After all, I never had any crush, ex-boyfriend or ex-husband who looked like him.

With time, I noticed that Mr. Shenoy had grown some possessiveness about me. He would react abruptly when I didn’t reply to his messages instantly. Worse, he became very angry whenever he saw me online, yet not chatting with him.

I made it clear to him that I remained busy like hell on weekdays. And my kind of weekend is entirely different from his kind of weekend, as I am a single mother.

I don’t find enough time on weekdays to devote to my son. So on weekends, I try to make up for my absence and spend as much quality time as possible with my son. Yes, I do remain online on Whatsapp sometimes, because I love to catch up with my friends. And I have lot of friends other than him.

This statement of having “lot of friends other than him” enraged him to such an extent that he blocked me on Whatsapp. I was bemused at his reaction.

I suddenly got a message on Goodreads from Mr. Shenoy. He talked to me casually, like nothing had happened between us. He told me that he had been to the USA for a brief time in between. Probably that was the reason we were not in touch, he implied. He asked me for my Whatsapp number again, as he had lost my number.

I gave him the number. And there he was – posing in some picturesque location in the US in his Whatsapp profile picture. I asked him about his USA trip, though he was not enthusiastic enough to discuss it. “It was just for work purposes. I didn’t get enough time to go out and visit any places,” he said, adding the most ‘important’ message for me, “But you are as beautiful as ever.”

The dumping of Mr Shenoy

This time around, I noticed that he had grown over-possessive about me. He was angry whenever I talked to others on Whatsapp.

My friends from school have formed a Whatsapp group. I am a member of that group. And that’s an all-girls group as I had my schooling in a girls school. Among all my Whatsapp contacts, this is the group I love most. There are days when we spend hours just chatting there.

On one such day when I was chatting on that group, Mr. Shenoy spotted me online, yet not responding to his messages. He sent me a message saying that it was because of this narcissistic nature of mine that my husband has abandoned me.

Now that’s a deal-breaker baby. My failed marriage is my weakest point and I am over-sensitive whenever anyone passes any insensitive remark regarding my relationship status. It’s almost akin to adding not just salt, but also red chilli paste to my already-existing injury.

This remark of Mr. Shenoy hit where it hurts the most. I messaged him back asking who the hell he was to decide with whom I should talk or for how long. I added that I don’t accord any importance to him or his remarks, and I hadn’t even bothered to save his contact number. Then in a fury, I blocked him on Whatsapp.

The next day, I got this message on Goodreads: 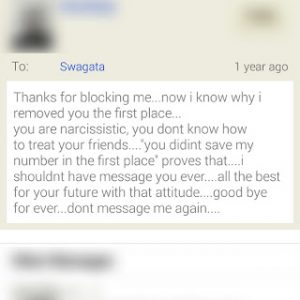 And I am still flabbergasted. I am yet to figure out what this “how to treat your friends” stuff means actually. And when that friends belongs to the opposite gender, then that ‘friendship’ becomes even more tricky. I am still on the lookouts for “Tips and tricks on friendships with guys.”

Header image is a still from the movie Qarib Qarib Singlle

An engineer by education, I am a civil servant by profession. A doting mother. An