I have had a love-hate relationship with the story of Ram and Sita all my life. Despite that, a live performance of the Geet Ramayan touched my soul.

The Ramayan, in my opinion (an opinion based on a lifelong study of stories and storytelling) is not a divinely ordained work. It is the culmination of a long oral history of what I think was the story of a great king and his life, told by bards through centuries, until everything that Ram did acquired a halo.

Roots in a long ago reality?

I think that the sequence of events might have a base in reality, at a time when patriarchy was just putting down roots in a Vedic society that had privileged women still educated to an extent, yet relegated to a secondary place due to their gender. For example, both Sita and Kaikeyi are examples of women who are learned in many things including the art of war.

A prince is born to a king late in life, having 3 brothers, and banished to the forest by a jealous stepmother who wants her son to be the crown prince. This prince, Ram, goes to the forest along with his wife, who wields her spousal right to stay with her husband through better or worse when he would have left her to be safe and comfortable with the family. His brother too, accompanies him, as a result of a strong sibling bond. Ravan, the king of a faraway island kingdom gets to hear of them through his wronged sister Shoorpankha, who is penalised for expressing her desires. Ravan is fascinated by her description of Sita, and abducts her when she is alone at home.

Ram sets out to rescue his wife and salvage his injured sense of ‘honour’, gathers forces, and wages a war in which he wins.

His wife is rescued. But what about his ‘honour’? (I would have respected him more had he been more heartbroken over the harassment Sita must have faced!)

Twice he fails Sita. Once when he talks about his ‘honour’ right after the war (I think the AgniPareeksha with the fire is a fantastical insertion of the bards’ imaginations, and part of the deification) when something or someone – most probably Vibhishan, Lakshman, or Hanuman – talks some sense into him. And the second time when he sends a pregnant Sita away after he comes to know that his people are gossiping about Sita – he was first the husband, and later the sworn king. He should have stood by her. Or was it that despite his love for her, he had never quite gotten over his own suspicions? That he was, essentially, the typically ‘injured’ male with his ego not assuaged?

I have been pretty candid about my dislike of the way Ram treated his wife. Never mind what the believers feel. Kudos to her for not grovelling and for rejecting him when he finally comes to ‘accept’ her. I have sought out and read a lot of literature on the epic, and a lot of what I agree with is from the point of view of Sita. Typically for women in history, the story has been all about Ram and his exploits and the women are either glossed over, marginalised, or demonised. As Karthika Nair says in her book Until The Lions, history has been all lopsided, and women’s voices, even their existence, has been made invisible.

If the above deconstruction makes you feel I have probably not grown up with the regular deification that comes with being born a Hindu in India, you are wrong.

I first heard of the Ramayan as a little child listening to stories from the mythologies, told by a very well read and devout grandmother, who was a wonderful storyteller. I learnt the mandatory ‘RamRaksha’ as a pre-schooler, and can receive it verbatim even now. And despite the above views that have come much later, as a thinking adult who was fascinated by mythology and read everything she could get her hands on, I have grown up with a deep sense of peace and wellbeing whenever I hear or recite the RamRaksha. The default setting for my emotional connect with the Ramayan is of faith, and not of doubt.

I think that despite being deified, Ram was not a very good man, from my feminist POV. Yet, the Geet Ramayan, which is a wonderful work of art in Marathi and part of my cultural heritage, pulls you in, and makes you believe in all that is considered good about the Ramayan.

In the mid-1950s, G. D. Madgulkar, a Marathi poet and song writer, and Sudhir Phadke, a singer and music director, came together for a project for the Pune Akashwani Kendra. They decided that the Ramayan was to be told in the form of a series of songs, one to be created every week, and broadcast on radio.

The premise of the songs was that Luv and Kush, Ram’s sons, unbeknownst to both, Ram and the twins, visit his court for his Ashwamedh Yagya, and sing the Ramayan taught to them by their guru, Valmiki, at whose ashram their mother lives incognito by the name Vandevi.

Every song can be sung as a standalone song, and the string of it make a mesmerising whole. As an art form, flawless, exquisite Marathi poetry, and melodious music based on Hindustani ragas of myriad hues, fitting to each mood of every song, sung so beautifully, from the points of view of many characters in the Ramayan – not just Ram – the Geet Ramayan is a mammoth and iconic creation that every Maharashtrian worth their salt knows.

I have grown up listening to these songs, not quite as a whole string, but as individual songs that came on radio through the 70s and 80s. As it happens with most of us, I did not quite think through the patriarchy, sexism, and religion in many of them – they were just melodious songs from a story I knew well.

I had four concerns about this show, to which I was going with my family.

First – It has been a long while since I had listened to any of the songs, and have in the interim arrived at a more feminist view of the epics. My belief in a god has also been shaken due to some personal events, and I am quite ambivalent about where my faith lies, or even if I have any faith left at all. So would I ‘feel’ the same about the Geet Ramayan?

I wanted to. I wanted that magic to be re-created, to not have my ‘woke’ self interfere with my ‘connect’ with the music. I wanted to immerse myself in the experience, to revisit the more innocent times when I was just that child with my grandmother.

Second – My daughter, a teenager, also identifies as an atheist of sorts – belonging, but not believing, she says. Though she has an elemental grounding in classical music and an inherent ear for it, I worried about her finding it all ‘uncool’, given her peer milieu. Yes, it really worried me, and I did not want her reaction to put a blot on some cherished childhood memories.

Third – I have always stressed on feminist beliefs for my daughter. Even though I sometimes practice what Chimamanda Ngozi Adichie would call Feminism Lite for myself (blame it on my generation and a deeply conditioned need to sometimes let sleeping dogs lie), I have always stressed the need for a feminist outlook to her, keeping my non-feminist indiscretions as far away from her as I can. Now here her mother was going to listen to, enjoy, and even cry and laugh with stuff that was patriarchal, even deifying a person whom she would have steered clear of in real life. Parenting fail, big time!

Fourth – Though we speak Marathi at home, and she speaks exclusively Marathi with her grandparents and others who are not very comfortable with English, she has not been much exposed to literary Marathi – the fault is completely mine – and wouldn’t that interfere with her appreciation of the songs?

I need not have worried

The Geet Ramayan has been performed live thousands of times since the 6 decades plus that it has existed, first by Sudhir Phadke himself, and later by his equally talented and knowledgeable son, Shridhar Phadke. It has also been sung by other people, but we went for the original – by Shridhar Phadke. 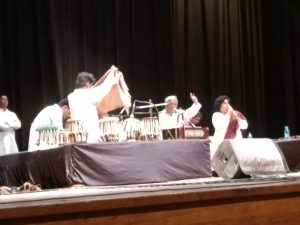 It was mesmerising! It was every bit what I had wanted it to be. The music pulled me inside it and I floated on a cloud of sound and goosebumps for the 3 hours of the performance. Of course, with the time constraints, not all songs were sung, but were cherry picked to cover the whole story. I could enjoy it, give myself up to the experience, and yet not have my beliefs compromised. It was just that – an oasis of nostalgia.

I ‘told’ the premise of each song sotto voce to my daughter before each one, who caught on quickly as she knows the context very well. The exquisite Marathi poetry too, did not get in the way of her appreciating the songs and getting goosebumps at times.

And I need not have worried about her reaction – she was thrilled to bits to experience a story she has been told by me, and knows through the RamRaksha. Also, thanks to my not whitewashing the sexism in period literature, telling her that it has to be read in the context of the period in which it has been placed (prime culprits – Enid Blyton, Agatha Christie, and many classic writers and their books with blatant racism, sexism, and xenophobia), she ‘got’ it. And was equally mesmerised.

Now she wants to listen to more of this cultural heritage that I have been delighted to have passed on to her. I have sent this YouTube link of the complete Geet Ramayan to her. My grandmother would approve.

And Then, Sita Started A Live Instagram Session Of Her Apaharan… Wait, What!

Indian Girls And Women Are Not Packets Of Ghee That They Need To Be Pure!