Sometimes, our stories are told by others, and we have to reclaim them. What would Soorpanakha have said, if she had told her own story? Winner, June Muse of the Month. 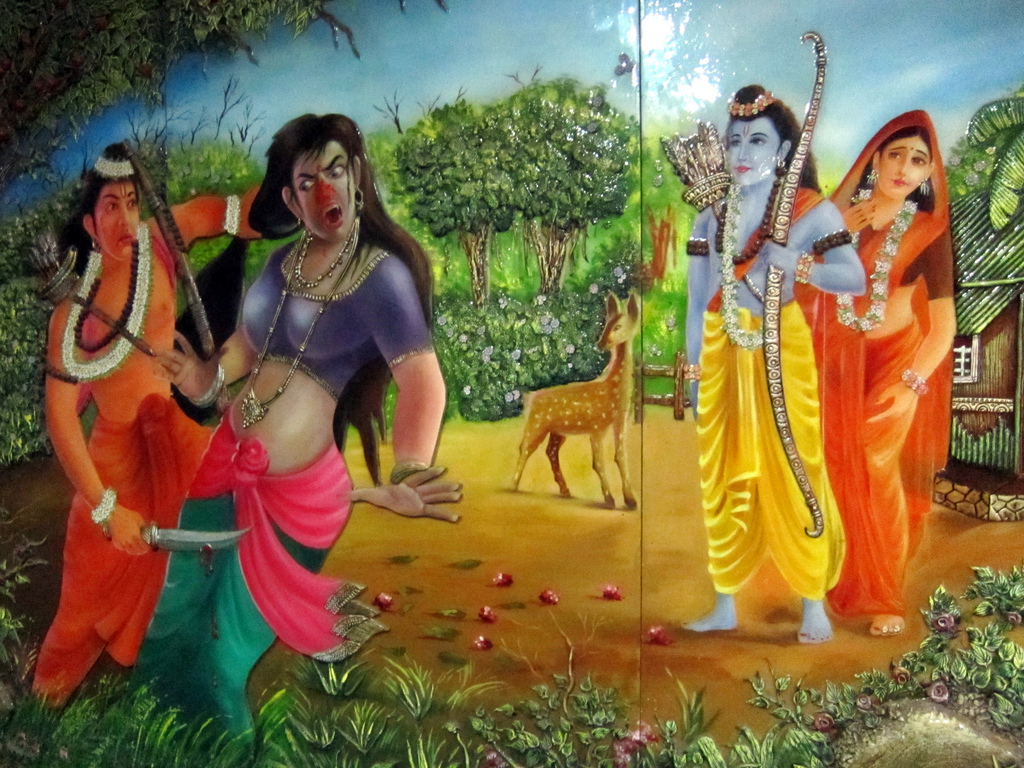 Sometimes, our stories are told by others, and we have to reclaim them. What would Soorpanakha have said, if she had told her own story?

Editor’s Note (Added): This is a work of fiction meant to imagine the standpoint of a lesser known character. It does not aim to be an “authentic” or “definitive” account of any events. I am Soorpanakha. My name is synonymous with Sin for many, encased for eternity in the pages of the epic Ramayana. I am not the role model parents would point their daughters towards. Why is that? You may ask. Because I admitted to lust. My name was pitted against Sita, the embodiment of purity and womanly virtues. She was everything I was not and I was everything she was not.

She was beautiful and so was I. Do not believe those terrible sketches of me with sharp fangs and blood shot eyes. I was a peerless beauty with large fish shaped eyes, for which my mother had named me ‘Minakshi’ at birth. A single woman, independent enough to roam the forests alone. I was free.

My freedom was my sin, as was my open sexuality. I dared to invite a man, the exiled king of Ayodhya, to make love to me.

“I am ekam-patni-vrata (faithful to my wife)”, Rama replied smugly.

He was not interested? Fine! There’s no dearth of men.

Laughing, he points at his brother, the youthful Lakshmana. It was kind of humiliating. But I swallowed my pride, and smiled at Lakshmana. He looked like a sweet kid.

Lakshmana however turned out to be a rude brat.

“But she’s almost fifty!”, he huffed. Aaah, the pride of youth! I ignored the insult and smiled sweetly.

“We are not getting married! Just a few laughs”, I mocked. He mouthed a few more insults. (I bet those won’t get written down by the poet sage Valmiki).

I went to Sita.

She glared at me. Obviously she had overheard when I was propositioning her husband.

Her veil moved a little. She was nice looking and tall. She slouched a bit, careful to keep her head covered at all times.

“Sorry, didn’t know he was married.” I ventured.

So, why is your husband dragging you around the forest?” I was determined to have a conversation.

“He is not dragging me anywhere. It is my duty to serve him and follow him everywhere. Where is your husband?” she replied huffily.

She looked contrite, “Sorry for your loss.”

‘Don’t be. I would have killed the abusive b#$%#rd myself one day,” I guffawed.

She stared at me, shell shocked. She had never dreamed a woman could talk like this.

“So, did you and ex-king over there fall in love or what,” I asked amiably.

“He won my hand by picking up and breaking Lord Shiva’s bow.”

“What does that even mean? Did you like him or not?”

Her eyes took a glazed confused look. “Like him?…it is my duty to love and serve my husband till I die and follow all his wishes.”

Sita was like a parrot, repeating lines no doubt fed to her since childhood. I was sincerely filled with sadness for the girl.  Later on, this same husband would force her to walk through fire to prove her ‘purity’ and she would commit suicide by jumping into a pit. She did not know this then, neither did I.

“Sita, are you happy with your marriage?”

“Happy? Nobody ever asked me that. I don’t know!”Sita’s veil had fallen over. Her slouch was gone. Now I understood why she slouched, the girl was taller than her husband.

I took her hand. “Listen sister, do you want to get away for a few days maybe. You could come with me, see the world, you know.” A wondrous expression filled her face. I am pretty sure that was a “Yes” on Sita’s trembling lips.

“Hey Soorpanakha, let go of my wife”. Startled I look around to see a furious Rama bearing down on me.

My long hair was jerked with such force I fell to the ground. I looked at Sita. But she was too weak to help.

Lakshmana pinned me down. A long menacing sword gleamed in his hand. His eyes were wild, his mouth salivating at the prospect of stabbing a defenseless woman.

“Do it quick. And no one needs to tell what really happened.” Their laugh rang in my ears as the sword copped off my nose and I could hear no longer. The sword had taken my ears too. The blood filled my mouth and I vomited.

“There is no greater agony than bearing an untold story …” I thought I saw Sita’s lips murmur the words.

Today I, Soorpanakha, tell my story.

(Edited) New comments are being disabled on this post due to the high traffic volumes we are experiencing. Our server is finding it difficult to cope with the rush, and is taking time to pull up comments! Apologies for the inconvenience.