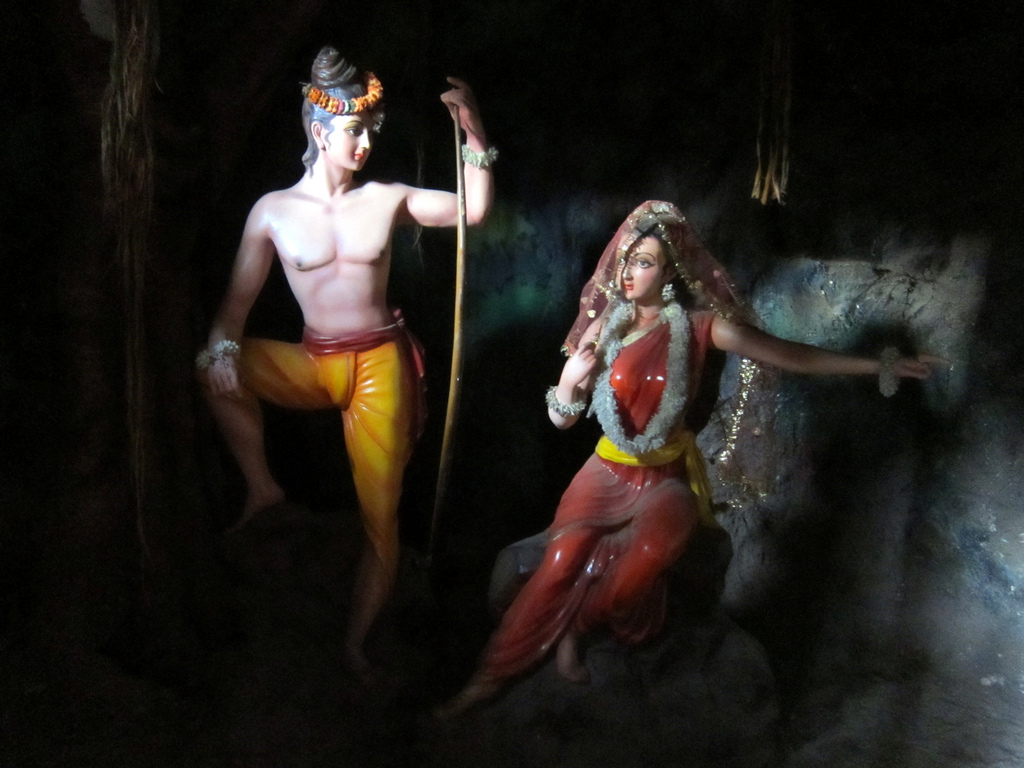 Like most Indian children, I had been introduced to the Ramayana at my grandmother’s knee. She taught me the Ramraksha Stotram, at a very early age, and would tell us stories from the epic, in her inimitable way. She, of course, came from a position of devotion, and that coloured her stories. I lapped them up; the storytelling mesmerizing me, making me want more.

Soon though, I grew old enough to question many things there that I had earlier accepted as gospel. I didn’t find any answers to my questions in the first book on the Ramayana that I read, C. Rajagopalachari’s version, which also portrays the women as demure, self-sacrificing beings.

Why didn’t Sita protest, I wondered? Was she a ‘thing’ to be won in a contest? She had accompanied him on his exile without complaints, there was much love between them. Why, then, did he treat her so coldly, even subjecting her to the ordeal by fire? Was it only to ‘avenge his honour’ that he had rescued her? How was it her mistake that she had been kidnapped by another? Why was it, that Sita and her behaviour was glorified as that of an ideal woman?

Why was it, that Sita and her behaviour was glorified as that of an ideal woman?

Why was it that women, even now, were expected to bear the burden of Sita’s life, tested again and again, almost as if they weren’t as human as men, with similar wishes, wants, and hopes? And what about the other women in the Ramayana? How could Kaushalya accept her husband’s insistence of following a dharma that clearly would cause so much pain all around? Why did Kaikeyi have to hide behind childish wiles and ‘boons’ when she was clearly a capable woman who had once saved her husband from sure death in the battlefield?

What about the long suffering Sumitra who says nothing in all this mess about her son too going away? What about Lakshman’s wife Urmila – she was just as newly wedded as Sita, and had to spend the years away from her husband. The story of the agnipareeksha, as well as the stories of Surpanakha and Ahalya underscore the epic’s stress upon the control of women’s sexuality.

Most storytellers then were male, as women were kept away from the written word. Social constraints also meant that being a woman was not compatible with the nomadic existence of most bards/storytellers – so obviously the stories were told from a male point-of-view. Valmiki, being a man of his time, saw nothing wrong in portraying his women characters as subordinate to their men, recognised only as mothers, wives, sisters and daughters, tied to their duty in those roles: revered if conforming to these expectations (Sita), and vilified if they didn’t (Surpanakha).

Arshia Sattar, a Ramayana scholar, who has an acclaimed prose translation of the Ramayana to her credit, says in an essay, “Sita and Surpanakha exemplify two types of women … Sita is good, pure, light, auspicious and subordinate, whereas Surpanaka is evil, impure, dark, inauspicious and insubordinate.” This has created a dichotomy of black and white in the perception of women, without leaving any room for the grey in between – the ideal of the Indian woman to which they are held even today, with often disastrous consequences.

The archetype of an ideal woman was further set in stone with the ‘Mother Sita’ in Tulsidas’ Ramcharitmanas, told in the Bhakti tradition, which has given rise to many local language versions since the 12th century CE, making the Sanskrit epic accessible to the common people. Tulsidas’ version reveres Rama as divine, with Sita as his perfect consort. He follows the tenets set by Manu in the Manusmriti, about the code of conduct for women, where they are denied any autonomy over their lives.

Ashok Banker’s Sita is a feisty woman who knows her mind. Even Kaushalya is a strong woman who doesn’t shirk from telling off her husband. In Vayu Naidu’s Sita’s Ascent, which is set in the Uttarakanda, Sita rises up as a vibrant woman through the memories of Lakshmana, Rama, and even Surpanakha. Devdutt Pattanaik’s Sita, too, is a woman sure of her strengths.

In Anand Neelakantan’s Asura: Tale of the Vanquished Sita is said to be Ravana’s daughter, whom he ‘rescues’ from a ‘vagabond, forest-dwelling’ husband. His unconditional acceptance of Mandodari even after she is molested by the monkey goons is in direct contrast to Rama’s acceptance of the agni pariksha to test Sita’s ‘purity’.

The Missing Queen by Samhita Arni is placed in contemporary times. A journalist in Rama’s Ayodhya goes in search of the missing Sita. She is forced to flee by the powers that be and goes to Lanka in her quest, coming to a startling revelation at the end. Very relevant to present day society, the book has a feminist outlook on Sita’s plight. Her graphic novel Sita’s Ramayana too, deals with Sita’s version of the war, and how women are the ultimate sufferers in any war, even if usually it is fought by men.

I struck gold, however, with In Search of Sita: Revisiting Mythology. This anthology of re-tellings, essays, interviews, scholarly articles, and stories discusses Sita as she is portrayed and perceived in classical literature, folktales, religious discourses, the various Ramayanas all over South East Asia, and classical / popular art forms. Sita’s character, here, is found to be a woman of a rare mettle, resolute and plucky, epitomizing the ancient idea of Stri-Shakti. The book also discusses the girl child and modern women in relation to Sita.

Arshia Sattar also explores the enigma that is Rama, in Lost Loves: Exploring Rama’s Anguish. She peels back the nuances of the epic, to reveal the conflict between personal anguish and public duty in Rama’s mind, and between the self-respecting woman and loving wife in Sita’s. Showing that they were both very human, even if divine.

Also worth exploring is Breaking the Bow, an anthology of some extraordinary speculative fiction based on the Ramayana, and AK Ramanujan’s 300 Ramayanas. And, do watch Sita Sings The Blues, in which Sita is a confident and emotional woman.