Meet these superheroes armed with words and books – Abhigya Shukla Akester & Jemimah Marak, who do their work in remote areas in India.

Many extraordinary and committed women do stellar work to make a difference, despite the hardships involved. Among them are countless unsung heroes who do not make headlines, but quietly go about their work, bringing about the necessary transformation, one day at a time.

Yesterday, #InternationalWomensDay was a day to take stock of the progress in women’s lives.

The theme for this year is #PressforProgress. On the occasion of International Women’s Day 2018, we showcase 5 such remarkable women, doing work that has got them on-ground results.

Not all superheroes wear capes. Some of them open libraries and reading rooms for little children so that the dreams and hopes can fly high into the air in an attempt to make this world a better place for us all. They dedicate their whole lives for the cause, sometimes without worrying about how short of funds they personally are and sometimes without even caring about their own lives. Two such superheroes who have been lighting fires in little eyes, in two of the darkest, coldest, farthest locations of this country, will be a part of this feature.

Garo Hills, Meghalaya, has been officially declared as a ‘politically disturbed’ area. If one has been following news reports of this country, before the recent elections, the area witnessed tremendous violence and insurgency situations. When I called Jemimah Marak, founder-owner of The 100-Story House, Garo Hills, Meghalaya, the agony was evident in her voice. She didn’t worry for herself though. She worried for little children of the village. In her harrowed state, she described how it is to be a child there. Little feet walk over landmines. Kidnappings, extortions, killings, gunfire are so rampant that it gets difficult for a child to sometimes attend schools and tuitions. Amidst all this, The 100-Story House and Jemimah offer an escape through stories and workshops to all these young ones. 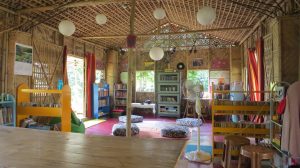 Several hundred kilometers away, in remote regions of Ladakh, Abhigya Shukla Akester, with her bright smile, through her Avalokitesvara Trust, hopes to empower children with the gift of education, the joy of learning, bringing previously absent opportunities for a better overall quality of life in the region. She travelled to Ladakh in 2011 with an intention of working with 22 young boys of a monastery school, in a village two hours away from Leh. The aim was to support them with speaking and reading English and make learning fun and innovative. She extended her initial 2 week plan to three months, as she observed keen interest and great potential amongst the kids there. The trust formed as a consequence of her observations and since 2011 she has managed to create a mighty number of 55 reading rooms in remote areas of Ladakh.

How did it all begin?

Both these women started their careers as educators early on in their lives and went on to build these temples of education without any solid finance or support. Using bamboo and thatch, The 100-Story House, began with modest donations of books and beanbags, while Avalokitesvara Trust started with building 8 reading rooms in a few monastery and nunnery schools.

Through its coziness and love The 100-Story House, aims at reaching out to children and helping them rebuild their lives with positivity. With a lot of hope and radiance Jemimah also says,“We want the library to be an agent of peace especially for children in insurgency affected places. Not just the children of the villages but also child militants who have surrendered and are living in rehabilitation camps.”

As the set up started building up in the form of concrete reading rooms, Abhigya realised that more individuals were required and so she set up a volunteer program whereby story tellers, artists; educators could give a minimum 2 weeks to a month’s commitment to one of the schools. As she traversed through the extensive regions of Ladakh, the number of reading rooms kept expanding and despite being an enormous challenge with respect to administration, logistics and funding (publishers unable to deliver books in such remote areas), she beams with a knowing it-was-all-worth-it smile. 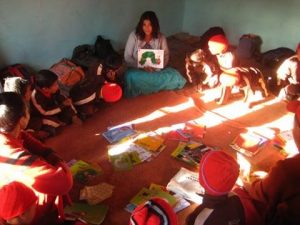 The positivity emanating from both these beautiful souls is fascinating.

While Abhigya did not find an issue with getting the children to reading rooms, because her rooms were set up in schools, Jemimah faced problems when she started to get children into reading more and reduced other activities. She says that parents fail to realize the importance of reading sometimes and hence, even lesser interest passes on to children, to which this author also thoroughly agrees. For the number of parents and children who did understand the significance though, the changes in attitudes were enormous. Reports started coming in about “improvement in their children’s academics, social life and even change in their disposition. Kids were happier and friendlier since their membership at the library.”

A very interesting common thought came up through the interviews with both these star women. In most rural areas the learning is still natural as against the present, outdated education system. Both the women feel and believe that “reading” opens the doors of limitless learning.”The 100 Story House library model is based on active community participation. It provides a platform for adult members of a community to come together to guide the younger generation and teach them things. Each community has its own unique identity in terms of stories, art, music etc. This library model allows the community to make the library their own and use its facilities to bring positive changes to their own people”, says Jemimah, as Abhigya echoes the need and necessity of having reading rooms as “Reading rooms can provide children with much joy through reading but also be a space of rest, recreation and rejuvenation.” 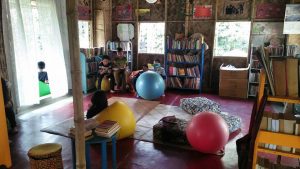 Apart from English and Hindi, both – the library and the reading rooms, look at acquainting children with regional languages as well, like Tibetan, Ladakhi and Urdu in Ladakh, and Garo in Tura. While in the Ladakhi reading rooms, the teachers and the educators try to translate and simplify the stories in accessible languages for more involvement, Jemimah, through her attempts wants to compile Garo folk lore from different communities in the region and turn them into illustrated books for children in the hope to make them bilingual (English and Garo) for wider readership.

Through her endeavor Abhigya hopes that “the children and staff feel empowered and make reading a lifelong habit, and revel in theworld of curiosity, discovery and fantasy”. Jemimah hopes to “replicate the library in others parts of the region, especially in the rural villages.”

While both these women are giving so much to the society, one wonders if they have received anything back from it, and pat comes the reply from Abhigya, “I met my husband in Ladakh and have now been travelling with our young daughter each year. I never intended to move to Ladakh, make big plans and carry out such extensive work. I’m still amazed by how organically this project has evolved. I’ve learnt to trust the process, take a leap of faith more often than not. I’ve also formed a deep admiration for mountainous landscape and the outdoors.” 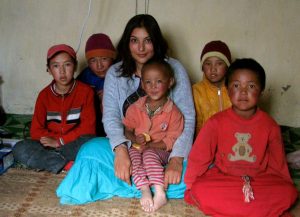 Jemimah lets us know that she vouches for the humbling experience she went through when support and encouragement poured in from all the sides making her wonder about the far and wide reach her little project allowed her.

Both these phenomenal women do not just dream of empowering children, they also hope they spread some inspiration to the women from the areas they work in. Jemimah hopes to empower women by giving them complete reins of her next project at another village called Siju in South Garo Hills. She says that the Mahila Samiti members and the women have agreed to also gradually look at hosting awareness programs for young girls who drop out of school to get married early. “The older women were very happy to be given the opportunity and platform to help the young girls stay in school.”

Abhigya tells us about Ladakhi women she worked with in some nunnery schools which are entirely run by nuns. She goes on to say, “It is admirable how they carry out each aspect be it administrative, logistic, kitchen, religious ceremonies and taking care of the younger nuns. Some of them have learnt how to drive and the mountainous landscape doesn’t intimidate them at all.”

It won’t be an overstatement if we say that Jemimah and Abhigya, dynamic as they are, inspire millions of us to undertake things we always dreamt of and to give the community back, a gift of a generation full of love, compassion, empathy and awareness.

Do check the #InternationalWomensDay2018 interviews of Maya Vishwakarma and Namita Waikar.

Is It Enough To Celebrate Women’s Day? Shouldn’t We Be Walking The Talk For A More Equal World?