AIB Schooled On Selectively Using Women In Their Sketches; Their Response? Classy!

AIB was criticized in a video for selectively using women in their sketches. The video was pertinent and AIB gracefully reacted to it accepting the problem. 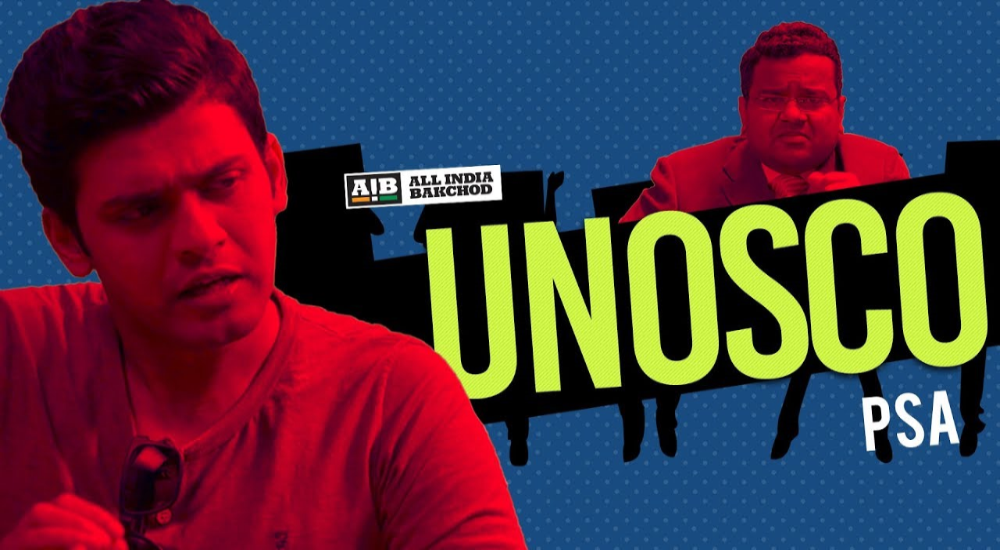 AIB was criticized in a video for selectively using women in their sketches. The video was pertinent and AIB gracefully reacted to it, accepting the problem.

Yesterday, Aayushi Jagad’s YouTube account posted a video titled, How AIB Uses Feminism, in which she and Sumedh Natu make an informed and measured critique about the portrayal of women in AIB videos.

The criticism and AIB’s response to it, are a masterclass in having a civilized conversation about feminism and male privilege.

The argument put forth by Aayushi and Sumedh is that AIB writes and casts female characters only when they are absolutely needed. They take the example of one of the AIB sketches, UNOSCO PSA, and point out that there is only one female character, who doesn’t have a speaking part, and miraculously disappears after a point.

Replacing female characters with table lamps makes no difference to the AIB sketches that are not specifically about women.

There are a lot of ‘genderless’ characters in AIB videos—i.e. they could be played by a person of any gender. However, AIB chooses to portray these characters as males. In fact, even when AIB parodied a BuzzFeed video, it chose to make it male-oriented, even though the original video it was based on was gender neutral.

AIB does make some great feminist sketches, written by women, such as Harassment through the Ages, A Woman’s Besties, The Bollywood Diva Song etc. So, it’s not that they do not know how to write or cast women.

However, as Aayushi puts it, it does seem like the women exist in their own separate universe as feminists in feminist sketches.

The result is that women in AIB videos are either feminists or plot devices in random roles like woman in bar, friend, or in many cases, mere background characters. Not many AIB videos (other than the ‘woman’ sketches) pass the Bechdel Test. Also, their first two song collaborations are with men, and their podcast with the cast of Lipstick Under My Burkha was not conducted by the AIB core members, who are always around when the male stars are being interviewed. So, this issue of how AIB works with women is not restricted to its sketches.

Nor is this a problem with AIB only. TVF, EIC, FilterCopy are all guilty of this. One FilterCopy Sketch—Stuff Women Are Tired of Hearing is written by five male writers!

The video concludes by saying that if AIB makes social statements, then they should walk the talk. Also, AIB is an influencer and an inspiration to many others and therefore how they portray women has a trickle-down effect.

Aayushi and Sumedh ask AIB to portray women as normal human beings, doing the same things that men in their sketches do, and saying the same punchlines.

This is a wonderfully thought out and pertinent critique that I wholeheartedly agree with. Frankly, it was an issue that had escaped my notice, and these points were a revelation.

What made this situation even better is AIB’s response to the criticism. In the comments to the video, they posted the following response:

“So we just saw this superb, very well-argued video by Aayushi and Sumedh. TL;DR is we don’t cast enough women in our sketches, and if and when we do, they’re either in a decisively “feminine” context (e.g. mother,sister), or put in situations that seldom pass the Bechdel test. We want to say that we hear you, we really do. We will actively work to fix this across our content, not just for the sake of social currency or likes, but because representation matters. We’d like to think we try hard to be inclusive, but we recognise that we fall short in some ways, and also that our own privilege stops us from seeing it. So thank you Aayushi and Sumedh for calling us out about this and forcing us to confront it. Creating more inclusive content is a constant process of evolution, and we’ll work much harder to tell stories that are representative of more.”

They also tweeted out a similar response.

AIB’s willingness to take responsibility is heartening. Very often, when someone is called out for being sexist, the response is to get defensive (as many AIB fans, especially men, did in response to the video!). However, when a public influencer like AIB takes the criticism positively, and promises to do better, they set an example. It remains to be seen if future AIB videos are more representative, but this public acknowledgement that they need do better is a great start!

Kudos to Aayushi and Sumedh for putting out a well-researched critique in a non-confrontational manner and three cheers for AIB, for their gracious and non-defensive stance!

It is conversations like these that we need. Now, if only the rest of the internet could be so civil!

No one is born woke. We are all born as blank slates, on which others write their prejudices and biases.

Our openness to differing points of view, our willingness to check our privilege and unlearn societal biases is what makes a difference.

Register at Women's Web to get our weekly mailer and never miss out on our events, contests & best reads - you can also start sharing your own ideas and experiences with thousands of other women here!
empowermentGender Equalitypatriarchystereotypes